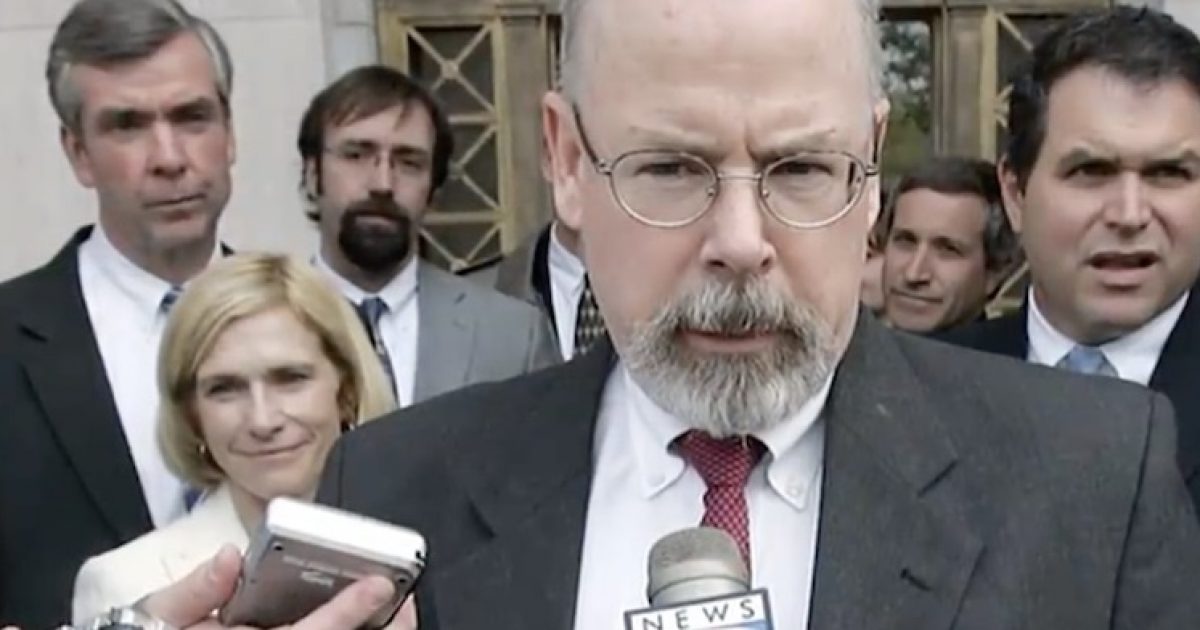 In confirming what America already knows, John Durham issued his first recommendation in the first coup against President Trump.

As reported by Law and Crime, Durham recommends that FBI lawyer Kevin Clinesmith be sent to prison:

The government submitted its sentencing memorandum on Thursday in the case of disgraced former FBI lawyer Kevin Clinesmith, who has admitted that he altered an email that was used in a FISA warrant application to surveil former Trump campaign foreign policy adviser Carter Page. U.S. Attorney John Durham, identified in the filing as Special Counsel, called for Clinesmith to be sentenced “at least between the middle and upper end of the applicable Guidelines range.”

Durham emphasized a “need” for Clinesmith to be punished with up to six months of imprisonment in order to emphasize the seriousness of the offense and to deter others from committing the same crime.

Will Clinesmith be the fall guy? Perhaps, because the scenario certainly sets up that way.

Clinesmith admits to altering the document. Then all his other co-conspirators get a pass. Most will say, “Well I only acted on the information submitted.”.

Let’s see if Durham is stupid enough to follow Clinesmith down this rabbit hole. Because no doubt everybody in the food chain of FISA should be above and beyond reproach. However, Obama’s administration was loaded with nothing but crooks. So, in pursuit of this nonsense, you will have a difficult time convincing me that nobody smelled this rotting corpse of a rat.

Moreover, what of the aftereffects of this ruse? The attempted impeachment of President Trump over Ukraine?

Back to the article:

Durham slammed Clinesmith for “undermin[ing] the integrity of the FISA process” and violating his oath as a lawyer. For this, Durham said, “there is a need for just punishment that includes a term of imprisonment to reflect the seriousness of the offense.”

He asked U.S. District Judge James E. Boasberg to “send a message that people like the defendant—an attorney in a position of trust who others relied upon—will face serious consequences if they commit crimes that result in material misstatements or omissions to a court.”

In August, Clinesmith told the judge that, “[a]t the time, I believed the information I was providing in the email was accurate […].”

Boasberg followed up by asking, “You agree you intentionally altered the email to include information not originally in the email?”

Clinesmith answered with a simple, “Yes, your honor.”

Think Clinesmith acted alone? If you do, then you likely believed that Biden actually won the election.

Let’s hope that after all this time, Durham has much more. Not that he needs it. This ONE piece of evidence should have ended Mueller’s sham “investigation”. Speaking of which, I want a refund for the $40 million spent on that bullsh*t.

What of the timing?

This story broke on Friday with practically no media coverage. Consider how big this story was prior to the sham “election”. All of America–certainly Conservative America–waited on this report. And now that the story has broken, hardly a peep.

Think the late-night comedy hacks will cover it? Perhaps people will apologize to President Trump?

Why isn’t Adam Schiff in jail? He’s the person who said publicly on multiple occasions that he had definitive proof that Trump colluded with the Russians. However, even after creating a reason to spend $40 million investigating him, they came up with nothing.

Let’s hope Clinesmith is only the beginning. But whether he is or isn’t, Barack Obama should shut the hell up about his scandal-free administration. This egregious act is the worst thing any administration should allow. And it happened on his watch.

Biden Chasing White People to Get the Vaccine

Kevin Jackson - April 13, 2021
I'm going to keep it real. White conservatives aren't nearly as stupid as their Leftist counterparts. And they are far smarter than black Leftists. I...