In case you wonder how Biden’s misfits feel about law enforcement, here’s your answer.

Jalina Porter was named deputy spokesperson for the U.S. State Department under Biden. In a 2016 Facebook post, Porter wrote that U.S. cops posed the largest national security threat, greater than that of both Russian hackers and ISIS, because of killings of Black Americans.

According to The Washington Free Beacon Porter said:

“The largest threat to U.S. national security are U.S. cops. Not ISIS, not Russian hackers, not anyone or anything else.”

“If ya’ll don’t wake up and rise up to this truth, the genocide against Blacks in America will continue until we are near extinct,” Porter said. “That’s not the world I seek to live in or create for myself and those around me.”

And here I thought the biggest existential threat to mankind was GLOBAL CLIMATE CHANGE!

According to the the article, Porter made her comments in September 2016. She responded to the video that was released of an unarmed Black man, Terence Crutcher, being shot by police in Tulsa, Okla.

In a statement on Tuesday, Porter said:

“Comments I made five years ago on my personal Facebook account as a private citizen were in response to the uncomfortable – and deeply painful – truth of race-based violence in America that has continued ever since.”

“The pain I expressed was real. Nevertheless, I should’ve chosen words that were less passionate and spur-of-the moment, as well as more constructive. I, of course, know well that not all law enforcement officers pose a threat to our community. Today, I am proud to stand as the State Department’s first Black woman Deputy Spokesperson, a position that affords me an opportunity to be part of the ongoing conversation regarding nationwide equity and inclusion, as we work to enhance the power of America’s example overseas.”

Frankly, I’m shocked she issued any statement of this sort. Usually these types of statements are badges of honor for Leftists.

Understand that Porter’s comment remained up until this latest position. Previously, she served as a congressional staff member for Rep. Jerry McNerney, D-Calif., and former Rep. Cedric Richmond, D-La., who is a White House senior adviser. Neither of those men had a problem with Porter’s past posts on Facebook. And neither does Biden.

In fact, Porter is raking in the praises under the guise of Black History Month.

This is incredible. Young, female, smart, black, world changer, inclusive, hardworking, integrity…..these are attributes she has and will bring to this important role!!!

The Daily Mail chimes in with Tucker Carlson’s assessment of the situation.

‘It’s worth pausing for a moment to consider the implications here because they matter, she’s speaking for the United States State Department, for our government, for you,’ Carlson said. 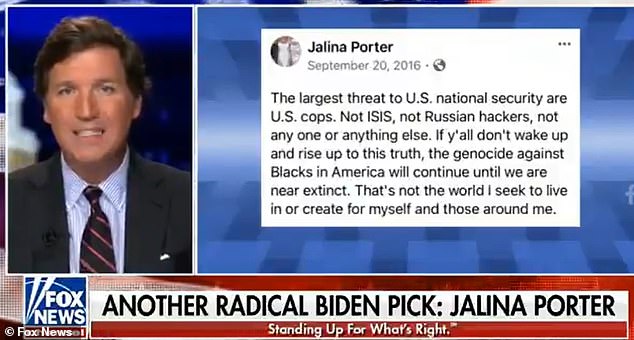 He said: ‘In the year 2016 when she wrote that on Facebook, a total of 19 unarmed African-Americans had been shot and killed by police. Twice as many died by lightning strike in the United States that year.

‘According to our new State Department spokeswoman, who now represents the United States government and you, that’s genocide.

Porter did not specify ‘shot’ or ‘unarmed’ in her statement about ‘genocide’, with one database of 2016 police killings showing that a total of 266 black people had died at the hands of cops that year.

Once again, the left frames information in a way that most values the left. But truth is an interesting creature. She almost always comes to light.