LeBron James is an ignorant racist. And he loves proving it.

So, in the recent shooting of Ma’Khia Bryant, a 16-year-old girl who was trying to brutally stab another girl, James threatened the police officer who saved the life of the other girl.

Clearly, James jumped to a conclusion when he tweeted to the officer:

“YOU’RE NEXT #ACCOUNTABILITY”, posting a photo of Officer Nicholas Reardon, the policeman who shot and killed Bryant. 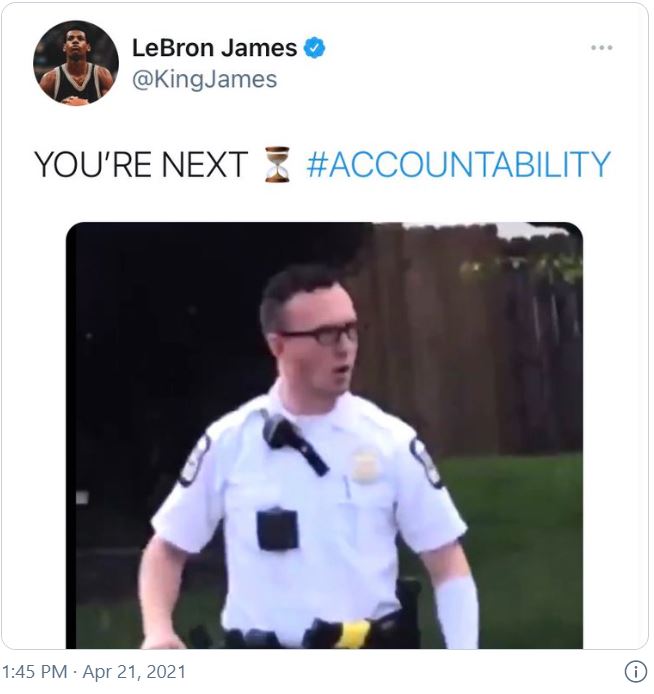 Why do I know James jumped to a conclusion? Because he quickly deleted the tweet once he found out that the white cop who shot the black girl did so to protect another black girl.

Oops. Tough to call the cop a killer when he was protecting another black woman. Further, James couldn’t accuse Reardon of “hunting blacks”, when it was the black people who CALLED THE COPS!

“LeBron James should focus on basketball rather than presiding over the destruction of the NBA, which has just recorded the lowest television RATINGS, by far, in the long and distinguished history of the League,” Trump wrote in a statement released by his office.

“His RACIST rants are divisive, nasty, insulting, and demeaning. He may be a great basketball player, but he is doing nothing to bring our Country together!”

Trump’s comments offer a major development in the push-back on the in-your-face racism of Leftists in America.

Back to James and the ramifications of his tweet

The media and other Leftists won’t discuss what James did. But there are huge implications.

First, as I mentioned earlier James jumped to a conclusion. He didn’t know the details of the story. He offered a knee-jerk response to a police shooting, validating what Leftists do routinely.

Second, James proved that he has no interest in truth. His reactions are based solely on the color of the proposed victim. In this case, he got the victim wrong. The real victim was the young black girl who would likely be dead, if the police officer hadn’t protected her from the now deceased Ma’Khia Bryant.

Third, will there be any discussion of the bravery of this officer by James? By today’s Leftist standards, this man took a real risk in a no-win, potential “Derek Chauvin” situation. Still, the officer acted to “protect and serve”.

Fourth, will James discuss the fact that despite law enforcement being present, Ma’Khia Bryant continued her attack against the other girl? It was as if Bryant dared the officer to shoot her.

Consider the other racial implications of Leftists.

For example, what if the girl who was about to get stabbed were white? If this were the case, I predict that Officer Reardon would be in a world of trouble. Leftists would accuse him of being racist, and America would hear all about white privilege.

Next, would you know anything about this story if the girl shot dead were white? You can bet that LeBron James wouldn’t tweet about that.

Do you think LeBron James can name any white person killed wrongly by a police officer? And don’t say Lee Harvey Oswald, though he likely would have to go back that far.

James later said that he deleted the Tweet because it was “used to create more hate.” But this is a lie. James enjoys creating hate. This tweet backfired. And for all the reasons I stated earlier.

James got caught red-handed, spreading lies. Moreover, it’s difficult to walk back the black-on-black crime that led to the death of a girl intent on killing another.

But James did worse for his racist movement. He exposed the real atrocity of black-on-black crime.

He said he is “so damn tired of seeing Black people killed by police,” adding that “it’s about the entire system and they always use our words to create more racism.”

“I am so desperate for more ACCOUNTABILITY,” he continued.

Does LeBron James really look at crime stats? Or does he just have his breaking news set for cop shootings?