Recall that Obama wasted billions on a 1% gain in green energy. Also, he buried so many climate-change addendums in his legislation that they are hard to pinpoint and even harder to get rid of.

Now, we learn of another scam lawmakers tried to go away with.

In fact, in 2016, Illinois lawmakers jumped in the game, aiming to build a solar power industry (not just a plant, mind you) from scratch. Their claim to fame- they were saving thousands of jobs at two struggling Exelon nuclear plants.

As The Chicago Sun Times reports,

Besides bailing out the nuclear plants, the Future Energy Jobs Act promised to create tens of thousands of solar power jobs and get the state moving away from fossil fuels to a point where, by 2025, Illinois would be getting a quarter of its power from “clean energy” sources.

Things haven’t worked out as planned. The 2025 target is now far out of reach. The jobs expectations went unmet, and the solar industry is laying off workers as the funding that was promised has dried up, an investigation by Inside Climate News and the Chicago Sun-Times found.

Obama wasted a fortune. He wasted a million fortunes. And now- another loss is staring us in the face. In fact, it’s estimated that if lawmakers don’t come up with a solution ASAP, the state of Illinois will lose “more than $300 million in funding for renewable energy programs.”

When environmental groups, unions and consumer advocates came together to support the law, they found common ground in marrying nuclear subsidies with support for renewable energy.

But it was Exelon that emerged as the clear winner under the state’s bold clean energy plan. It got $2.3 billion in subsidies funded by electricity customers over a decade for its two plants.

And now the company is demanding even more money — and threatening to close two other nuclear plants if it doesn’t get what it wants.

“Exelon continues to get $235 million a year, while the solar support has been stripped away,” said Howard Learner, executive director of the Chicago-based Environmental Law and Policy Center, who’s been a critic of the state’s nuclear bailout. “Illinois could’ve been a Midwest solar energy leader.”

Complicating the current scramble is the ongoing federal bribery investigation of Exelon and ComEd, its Chicago utility subsidiary. Prosecutors have said ComEd gave cash, jobs and contracts to associates of former House Speaker Michael Madigan, D-Illinois, with the aim that he would shape the legislation to the company’s benefit.

Awww. Isn’t that sweet? Another crooked politician. Like Biden, Madigan stuck around too long. He was the “longest-serving leader of any state or federal legislative body in the history of the United States, having held the position for all but two years from 1983 to 2021.” He’s the prime example of the dangers that come with career politicians.

I personally guarantee Michael Madigan will stick to that story. Deny, deny, deny. In fact, he leans on the excuse that he’s yet to be arrested. Ironically, Hillary hasn’t been arrested yet either, but she’s still as crooked as they come. Oddly enough, many from Madigan’s inner circle already had the cuffs slapped on them. And it’s only a matter of time before one of these leftists rolls over to play “let’s make a deal.”

That’s when Madigan really needs to start worrying. Of course, you won’t see this story on AOC’s Twitter feed. One would think she’d jump up and down to help someone like Madigan. Wasn’t the Green New Deal her idea? I’m suddenly reminded that AOC was removed her proposed legislation from her own website. Because someone actually explained the contents to the little lefty princess. But maybe AOC’s not offering her support because her new found trauma has her in therapy. As Trump would say, “what a shame.” 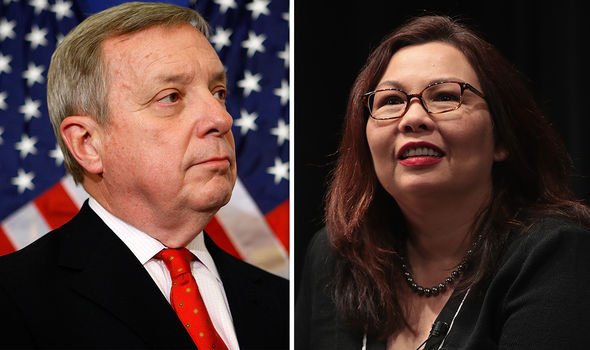 Notice the pattern here. Liberals formulate an agenda. They push and pull and press everyone to get on board. Then, they hit a bump in the road. A massive pothole, considering where Democrats lie these days. After which, a new battle cry sounds out- “jump ship!”

You can bet your very last dollar on this, and you will come out with a pocketbook like Donald Trumps. Democrats won’t stick around and sort out the mess. Instead, they will distance themselves, deny ever being involved. And pray no one does a little digging.Too bad this is the age of the internet where your hypocrisy can be googled in less than a minute.