Tell me who’s to blame when children go rogue!

We need to find the answers, because this defies any semblance of logic. Officers were forced to return gunfire and shoot a fourteen year old girl, who was joined in a shooting spree by her friend, a twelve year old boy. After fending off several rounds of fire, police shot the girl in the abdomen.

Luckily, the boy surrendered, thus escaping police action. The story is almost unbelievable, and reads like a Hollywood plot. The teens escaped their group home, broke into a house, found a trove of weapons including a pump action shot gun and an AK-47, and when police caught up to the unruly delinquents, they open fired. More than once.

“I don’t know what to say. Where have we gone wrong that a 12-year-old and 14-year-old think it’s OK to take on law enforcement?” 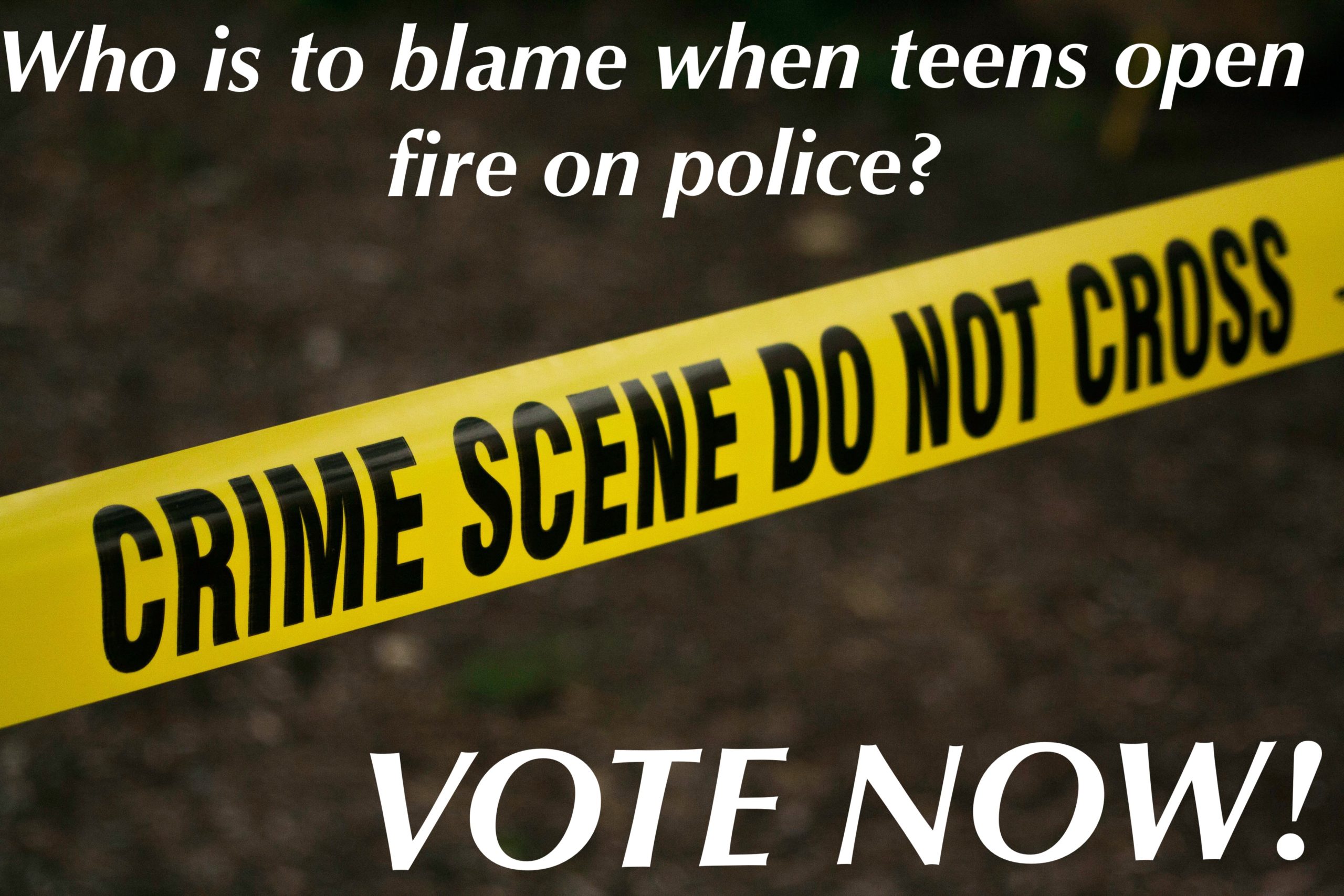 The sheriff’s office on Wednesday released over nine minutes of edited video showing footage from body cameras and a helicopter looking down at the scene.
“She’s pointing the gun. She’s pointing the gun behind the trash can,” one officer says in the footage shortly before the deputies open fire.
Charging affidavits for the juveniles indicate they are charged with attempted murder of a law enforcement officer and armed burglary.
The affidavits include details from an interview with the boy in which he admits to shooting repeatedly at officers using a handgun, a shotgun and an AK-47 that they had taken from the home. He told investigators that they saw deputies outside the home, at which point the girl said, “I’m gonna roll this down like GTA,” referring to the video game “Grand Theft Auto,” according to the affidavits.
The boy “told detectives he knew they were cops when he shot them because he wanted to harm them. There are the words of a 12-year-old,” Chitwood said at a news briefing.
The startling spree of gunfire came as Chitwood insisted deputies repeatedly tried to deescalate the situation, make personal contact with the juveniles and were forced to hide behind trees amid waves of shooting.

“We try to deescalate, we throw a cell phone into the house to try to talk to them. The 14-year-old comes out of the garage with a pump shotgun, levels it at deputies, and despite warnings to drop it, she walks back into the garage. She comes back a second time, and that’s when deputies open fire,” Chitwood said.

According to the assailant, Grand Theft Auto definitely plays a role. But is that just Generation Z making excuses for their bad behavior?

Can we really hold a video game accountable?

Forbes magazine suggests there’s really no causal link between violent video games and active shooter situations. The reasoning? At least 140 million copies of Grand Theft Auto have been sold since it’s debut. If even 5% of users were persuaded to take a firearm and shoot someone, we’d have 7 million shooters on our hands!

So if video games aren’t the answer, what is?

Could the culture of BLM and defunding the police contribute to these violent acts? Truthfully, we’d be fools to discount this possibility.

Already, working as a police officer is one of the most stressful jobs in the country.

Now, we’ve become a society willing to judge all by the actions of a few.

It is normal to be angry at police officers who do wrong, regardless of race. But it’s far more wrong to broad brush all officers with hate rhetoric, suggesting that cops conspire to form a cabal of racists. The Black Lives Matter and similar movements did more to dis-empower policemen from doing their sworn duty than ever before. The victims of that were citizens such as you and me. In violent encounters as in Baltimore and Ferguson, the real victims were businesses, homeowners and law-abiding taxpayers while cops were ordered to stand down, basically stripped from performing their duties.

Thus, we’re left with powerless cops. They’re exiting the profession in droves. Add to that a broken foster system, and we’re left with kids headed in the wrong direction. And no one trying to turn them around. And when the mainstream media promotes hatred towards the police, well these kids fill their voids with resentments.

Both of the teens who shot at police were in foster care. The boy didn’t have a criminal history, but he did make two school threats last year. CNN adds: “once threatening to throw a brick at an administrator, and five days later threatening to kill a student and “spread his guts all over the bleachers.”

Meanwhile, the girl already set fires that nearly spread to homes, and her mother turned her over to foster care because her daughter was “uncontrollable.” Yet, their placement in a church-run group home didn’t do enough to set these two on the right path. The group home is desperate to save face.

“This situation is tragic and is the result of the system failing our children,” Kitwana McTyer, the President and CEO of FUMCH, said in a press release. “These children are in desperate need of care in the appropriate setting, which is a higher level of care than we provide.”

“At this juncture, the level of children who are being sent to us through Emergency Shelter care at times is beyond the scope of our capabilities to provide the care required and limits who we can serve as part of our mission.”

Everyone has a well-thought-out version of “it’s not our fault.” Yet no one has a solution in sight. And next time, a few kids on a shooting spree might not get so lucky. It’s not every day one survives after shooting at the police.