President Trump did a bit of math for Joey Demento. And it has to do with the vote count.

Trump chimed in on another slip of the tongue by Biden. 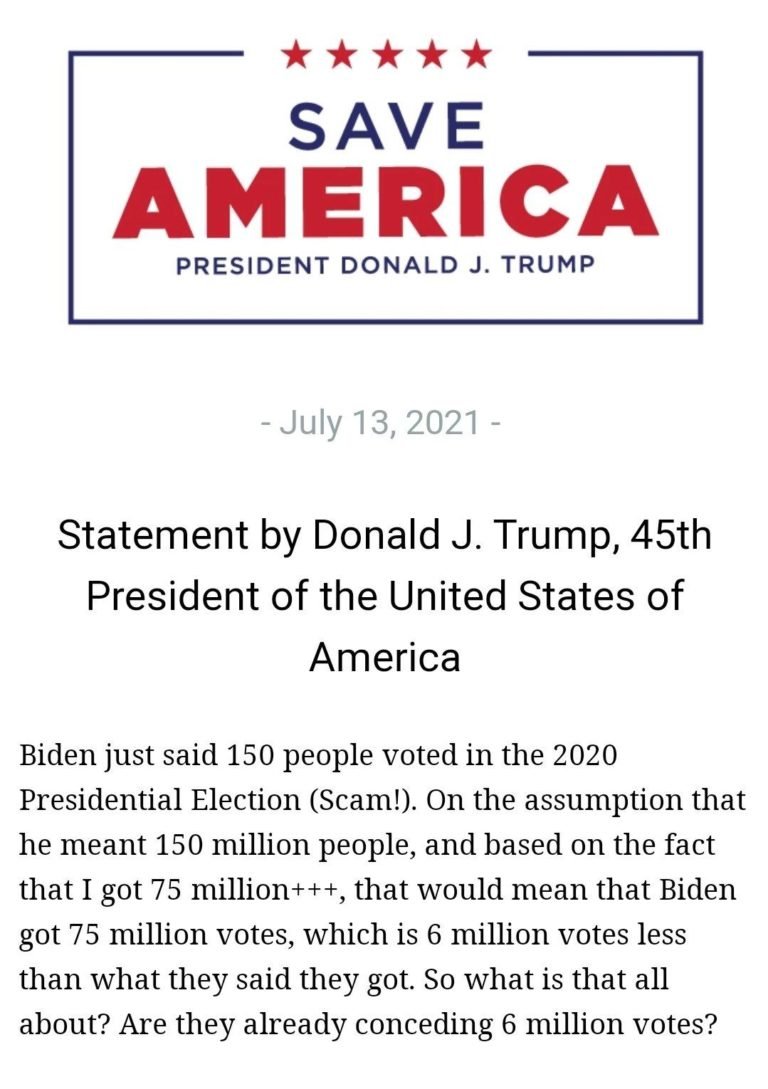 Trump is on to something.

Trump says the obvious. He got 75 million registered votes. This discounts the number of Trump votes that were given to Biden through manipulation of various voting machines. So, we can easily see how Joey Demento slipped up.

Biden’s brain fart indicates that he believes 150 million people voted, which splits the vote. Or does it.

But that’s not the case either.

I have repeatedly claimed that Trump received over 80 million votes. If we add the 6 million that Biden negated, then Trump gets to 81 million.

Let’s be clear. Joe Biden didn’t even get 70 million votes.

I have argued that there is no way in hell that Biden got more votes than 2008 Obama. Even accounting for increased population, Biden would be hard pressed to get to 70 million.

So whether you use 150 million, Biden’s new number or the 156 million number originally claimed, the numbers bode well for Trump.

Could Trump have gotten 86 million votes? I say yes. As he was the target in the biggest conspiracy and coup in American, possibly world history.

What bothers the Left the most is that over 80 million Americans continue to support Trump. And Trump isn’t going away.

Why did the numbers change?

Check out this video of how Democrats scanned ballots multiple times. Democrats claimed that ballots were re-scanned because the machines didn’t read them properly. Not true. They figured nobody would discover what they did, apparently.

Now there's proof on the other side, from the ballot images themselvespic.twitter.com/krVgAJSwOr

The video proves that the ballots were counted each time that they were scanned.

Further, this validates what I already knew. So I repeat; there is no way in hell Biden got 81 million votes, or even 70 million votes.

According to the recount, some ballots appear to be scanned dozens of times. No wonder Democrats are fighting recounts so vigorously.