Nark on your friends; but only for your protection. Because some of your friends could be TRUMP SUPPORTERS! 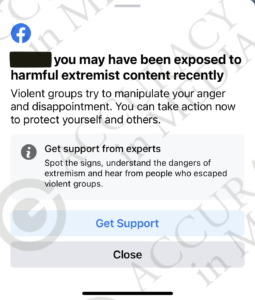 “…you may have been exposed to harmful extremist content recently”

And who defines what constitutes “harmful extremist content”? Snowflakes or Facebook’s algorithms?

“Are you concerned that someone you know is becoming an extremist?”

“We care about preventing extremism on Facebook. Others in your situation have received confidential support”

From the man who laughed about people willing giving him their data.

“Violent groups try to manipulate your anger and disappointment. You can take action now to protect yourself and others.”

Who could these warning possibly be for? Conservatives vote when we get mad. Unlike Leftists, who will track you down at rallies or baseball games or well, ANYWHERE to kill you.

Given that most Conservatives are exiting Facebook in droves, I suspect the warnings are for Leftists.

And like Facebook’s “fact-checkers”, they offer help from “experts”, as this graphic indicates:

For more details on what triggers this warning, visit Accuracy in Media.

This is some scary Orwellian stuff. I’m glad that Facebook killed my account. Because this new program would undoubtedly target my supporters. After all, we believe in the truth.

Facebook still hasn’t told me why they deleted my account. I did nothing wrong, except question everything. One would think Facebook would appreciate a black man with an inquisitive mind. Not the case.

I have said on my radio show and elsewhere, Facebook has far too much power in determining fact from fiction. Extremism from mundane.

It will indeed take an act of a non-crooked Congress to reel in this social media Gestapo giant. Until then, soon Conservatives will have an amazing alternative to Facebook that is like nothing anybody has seen. STAY TUNED!