Newsflash. I’m pretty sure most Americans aren’t planning their next vacay to party hard at the Kabul Airport.

By now, we all know we have fallen soldiers. Blood on Biden’s hands. But by all means, let’s give Nancy Pelosi to floor to make her little “stay home” speech to save America.

House Speaker Nancy Pelosi issued a statement about the bombing that claimed the lives of 12 U.S. service members in Kabul while issuing a warning to lawmakers not to travel to Afghanistan.

“Today, we suffered the loss of life of at least twelve U.S. servicemembers and dozens of civilians from the terrorist attack outside of the Kabul airport,” Pelosi said. “We mourn the loss of every innocent life taken, and we join every American in heartbreak over the deaths of the Americans and all killed.”

“Sadly, the gravity of the situation in Afghanistan necessitates reiterating that Members must not request or plan visits to the region,” the statement continued. ” The Departments of Defense and State have explicitly stated that Member travel to Afghanistan and surrounding countries would unnecessarily divert needed resources from the priority mission of safely and expeditiously evacuating Americans and Afghans at risk.  It should be clear that any Member presence presents a danger and an opportunity cost of resources, regardless of whatever value that Members consider they may add by such trips.”

Of course, Pelosi’s comments are largely directed at two members of Congress that secretly flew to the Kabul Airport.

According to the AP:

Rep. Seth Moulton, D-Mass., and Rep. Peter Meijer, R-Mich., flew in and out on charter aircraft and were on the ground at the Kabul airport for several hours Tuesday. That led officials to complain that they could be taking seats that would have otherwise gone to other Americans or Afghans fleeing the country, but the congressmen said in a joint statement that they made sure to leave on a flight with empty seats.

“As Members of Congress, we have a duty to provide oversight on the executive branch,’” the two said in their statement. “We conducted this visit in secret, speaking about it only after our departure, to minimize the risk and disruption to the people on the ground, and because we were there to gather information, not to grandstand.”

The two lawmakers are both military veterans, with backgrounds in the region. Moulton, a Marine who has been outspoken critic of the Iraq War, served multiple tours in Iraq. Meijer was deployed as part of the Army Reserves and later worked in Afghanistan at a nongovernmental organization providing aid. Moulton serves on the House Armed Services Committee and Meijer is on the House Foreign Affairs Committee.

I can’t deny that these trips likely caused a disruption in the evacuation efforts. However, if we had a president we could trust, our lawmakers wouldn’t feel hard-pressed to intervene on their own.

Sadly, our President doesn’t have the balls to save the very lives he endangered with his poorly-planned withdrawal from Afghanistan.

A source briefed on the situation in Kabul told Fox News that some Americans stranded in Afghanistan will likely be left behind after Thursday’s bombings.

The source told Fox News that “hundreds” of ISIS-K fighters remain in the vicinity of the Kabul airport and that the attacks are “likely to continue.”

“Military continues to retrograde and depart [the] airport,” the source told Fox News. “Almost a certainty that Americans will be left behind.”

Former President Donald Trump issued a statement Thursday offering condolences to the families of U.S. service members who died in an explosion at Kabul’s airport.

“Melania and I send our deepest condolences to the families of our brilliant Service Members whose duty to the U.S.A. meant so much to them,” Trump said. “Our thoughts are also with the families of the innocent civilians who died today in the savage Kabul attack.”

“This tragedy should have never been allowed to happen, which makes our grief even deeper and more difficult to understand,” Trump continued.

I have to say, I think Ben Shapiro sums it up best.

Hillary Clinton once wondered who Americans would want picking up the phone in a national crisis at 3 AM. With Joe Biden, nobody is picking up at 3 PM.

As for me, I say let the impeachment begin. Isn’t that what would happen if the Taliban took Afghanistan under Trump’s watch? Or is this just another leftist hypocrisy, where Biden is easily forgiven for his betrayal of American soldiers? Inquiring minds want to know.

It is sickening and enraging to hear that at least 12 U.S. servicemembers have been killed at the hands of terrorists in Kabul. We need to redouble our global efforts to confront these barbarian enemies who want to kill Americans and attack our homeland. My full statement: pic.twitter.com/ydke3F6sZ7 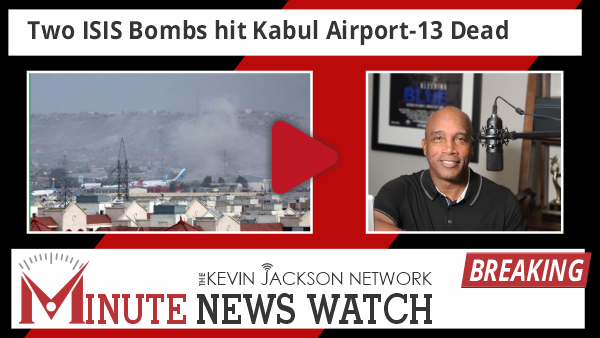