While the Left use the power of the federal government for their propaganda project to scare citizens into submission, many people push back.

Despite the onslaught against anybody who dare buck the false narrative of Wuflu being a pandemic, Americans continue to fight back.

Americans refusing the Wuflu “death pokes” are not anti-vaxxers as the Left proclaim. Almost every American against the Wuflu vaccines has been vaccinated for something. Further, we take other medications (mostly oral), so we clearly understand the advancement of modern science in keeping people alive. That said, we also know when somebody wants us to play “pull my finger.”

Real science pokes holes in every aspect of the Wuflu scam, beginning with the math.

The math of infections, for example. The CDC has just over 40 million people infected with Wuflu since it was released from the Chinese bioweapon facility in Wuhan China. However, others estimate that almost one-third of the American population have contracted the virus.

Why not report the real numbers? Obviously this would completely distort the narrative of the deadly nature of the Wuflu. No emergency; no emergency measures.

What if the Wuflu kills even less than the less than one percent rate?

I’ve written multiple articles on the math of Wuflu. And what’s clear is Wuflu follows certain patterns. I won’t bother to go into more detail, and understand that I have not done any scientific analysis. In other words, I’ve done pretty much what the Fed has done, except I didn’t pay any “experts.” And my conclusion is that countries with the highest GDPs spend the most per capita on fighting this scamdemic.

By now you may have seen the video of the woman talking to a school board and informing them that she’s aware they have been paid off to promote wearing masks and getting vaccinated.

Kudos to this woman for doing the research. She revealed what many of us thought was happening. I equate her to Anita Moncrief, one of the ACORN whistleblowers.

Now, it’s time Americans fight back. And one group has begun, launching an awareness project by billboard.

Don’t be BULLIED billboards are appearing around the country. And they are going viral on social media. 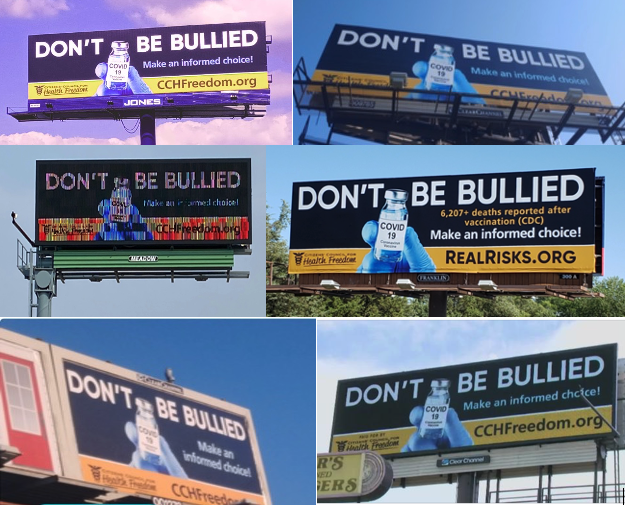 If you visit the RealRisks.org website, you will see lots of information gathered from the CDC, as well as other sources. Much of the information even from the government itself counters the narrative of safe vaccines.

I applaud this group’s action. Far too many Conservative groups are all talk.