Former senior White House counselor to President Trump, attorney, business entrepreneur and the first woman in American history to ever lead a successful presidential campaign, Kellyanne Conway is a legend in work ethic, productivity and strength.

It started in childhood when she spent eight summers working on a blueberry farm–backbreaking labor which poor white sharecroppers used to do in the olden days.

Armed not only with an armor of work ethic, Kellyanne has more courage in a paring of her pinky fingernail than most male members of Congress collectively. Once at a black-tie gala the glamorous, evening gown-clad blonde gallantly stepped between two tuxedoed men duking it out to break up their fight while other men just stood around gawking. The guys wouldn’t stop. The Irish-Italian dynamo slugged one of them at least three times. The fight stopped.

Now Kellyanne Conway just took on Cretin-in-Chief, JoJo Demento: the morally diseased and mentally impaired dictator who, among a non-stop assembly line of failures, abandoned as many as 10,000 of our own American citizens and loyal Afghan allies in Afghanistan to inevitable slaughter by the Taliban.

Conway stood up to a tyrant who decreed against scientific evidence that all of America be forced to submit to experimental vaccines—vaccinations that have caused a never before seen array of grave side effects including but not limited to skin sloughed off the entire body;  cardiovascular pathology including myocarditis, pericarditis and stroke even in teenagers; spontaneous loss of pregnancy; and death. All this when the survival rate of COVID-19 is 99%! And yet illegal aliens pouring across our borders are not forced to receive the vaccine. Nor are Afghan refugees. Nor United States Postal Service workers. Even Congress is exempt from the mandates. I guess COVID decided not to infect any of the aforementioned.

Viciously vindictive Biden also embarked upon a politicized extermination of patriots’ jobs, including the post held by Kellyanne Conway as a member of the Board of Visitors to the United States Air Force Academy. It is a post with considerable responsibilities but zero monetary compensation.

Feeble-minded Biden took on the wrong opponent.  Check out Kellyanne’s September 08, 2021 letter to the White House. (I love that she omitted the customary salutation of “Dear Mr. President” as well as the traditional closing of “Most respectfully.” The impotent infester of the Oval Office doesn’t deserve such niceties.) Here is the letter in toto: 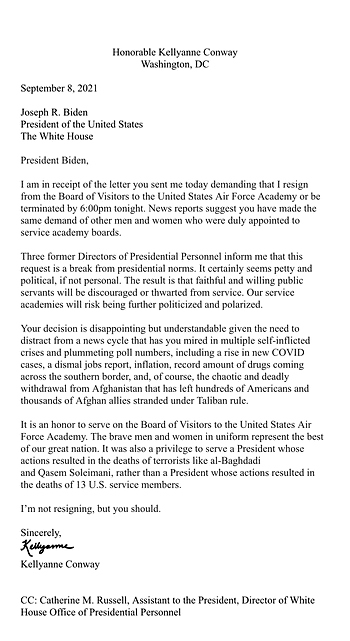 I am in receipt of the letter you sent me today demanding that I resign from the Board of Visitors to the United States Air Force Academy or be terminated by 6:00 p.m. tonight. News reports suggest you have made the same demand of other men and women who were duly appointed to service academy boards.

Three former Directors of Presidential Personnel inform me that this request is a break from presidential norms. It certainly seems petty and political, if not personal. The result is that faithful and willing public servants will be discouraged or thwarted from service.  Our service academies will risk being further politicized and polarized.

Your decision is disappointing but understandable given the need to distract from a news cycle that has you mired in multiple self-inflicted crises and plummeting poll numbers, including a rise in new COVID cases, a dismal jobs report, inflation, record amount of drugs coming across the southern border, and, of course, the chaotic and deadly withdrawal from Afghanistan that has left hundreds of Americans and thousands of Afghan allies stranded under the Taliban rule.

It is an honor to serve on the Board of Visitors to the United States Air Force Academy.  The brave men and women in uniform represent the best of our great nation. It was also a privilege to serve a President whose actions resulted in the deaths of terrorists like al-Baghdadi and Qasem Soleimani, rather than a President whose action resulted in the deaths of 13 U.S. service members.

I’m not resigning, but you should.

“I’m not resigning, but you should“ deserves to be memorialized in the annals of history as one of the truest, toughest and most humiliating comebacks ever against this wannabe president.