In case you are wondering if Democrats are lying skanks and scumbags; I provide more evidence.

Democrats are not to be believed…period. Take the case for unconstitutional Draconian vaccine mandates for example. 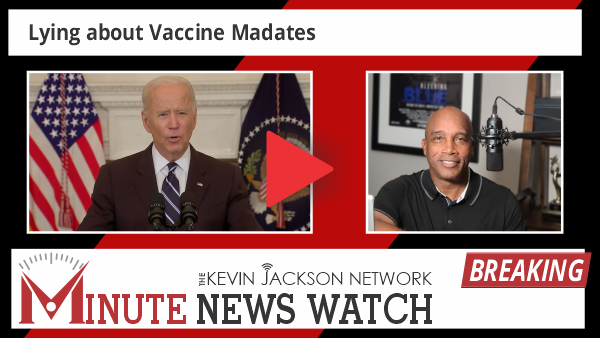 When Joey Demento was a candidate for president, he was hesitant about taking a vaccine that he felt was rushed due to Operation Warp Speed. Further Biden said that treatment would not be mandated.

Post The Big Cheat, Biden and his minions repeatedly reassured Americans that mandates were unwarranted and not enforceable.

“No, I don’t think it should be mandatory,” Biden said last December. “I wouldn’t demand to be mandatory.”

“You don’t want to mandate, and try and force anyone to take a vaccine,” Fauci said earlier this year. “We’ve never done that.”

“We don’t want to be mandating from the federal government to the general population. It would be unenforceable, and not appropriate.”

But Biden’s team didn’t end with the two most influential people on this Wuflu farce committing to no mandates.

Next, Biden’s press secretary Jen Psaki when asked about vaccine mandates only two months ago declared that Team Demento had no such plans:

“Our interest is very simple, from the federal government, which is Americans’ privacy and rights should be protected.”

In another press briefing, Psaki reminded us that mandating vaccinations is “not the role of the federal government.”

And what of Biden’s handlers?

Speaker of the House, Rep. Nancy Pelosi (D-CA) agreed the government has no such power. Pelosi declared only a month ago,

“We cannot require someone to be vaccinated. That’s just not what we can do.”

As I and many other astute people have said repeatedly, Democrats lie to your face.

Reflect on their lies for just a moment to see how things work.

Remember when Democrats offered that Trump colluded with Russians to win his election? Well here are two points of fact:

(1) Trump definitely did not collude with the Russians, and

(2) Hunter Biden was in partnership with Russian oligarchs, their wives, and other prominent Russians.

Meanwhile, Democratic Representative Adam Schiff promised to produce proof of Trump’s Russian collusion. Where is that proof? Did the press push Schiff to provide his so-called evidence?

Team Demento flipped on this issue and in only weeks. Under Biden’s new “wet dream” for vaccine mandates, about half the American work force would be required to get a death poke.

Worse, his information is not based on science, as claimed. Democrats’ claims are based on quackery and manipulation of data.

“First, we must increase vaccinations among the unvaccinated with new vaccination requirements.”

Next, Biden laid out the penalties.

Federal workers who refused getting vaccinated would be fired, and private-sector workers refusing the death poke would be fined more than $13,000 per worker.

And what of the over 40 million people who had the dreaded Wuflu and survived, ergo the 99.4 percent of people who contracted the disease?

Currently, there appear to be no exceptions, even for those who have natural immunity. This fact alone should send out red flags about the real goal of 100 percent vaccinations.

There is no doubt that natural immunity bests anything coming from a lab. But you can bet that Fraudci and team will be twisting studies that prove this, as they continue this BS narrative around Wuflu.