Leftists like to live in a state of denial. Hear no evil, see no evil, so to speak. But it’s hard to deny it when you catch them live on candid camera!

That’s what just happened to the medical field thanks to one Tennessee family. Meet Patrick D. Hampton. He’s a black conservative warrior, much like our own Kevin Jackson.

Recently, Hampton’s brother Marlon was admitted to Erlanger Health System, where he was told he was about to die at least a hundred different times. In fact, the hospital seemed resigned to let Marlon go without a fuss.

Perhaps that is somehow tied to the hefty payout hospitals receive for every WuFlu death, almost $30k per patient. Clearly, this is what class action lawsuits were created for, and you can bet this class action will be a big one. To quote one of my colleagues, “never in history have hospitals been paid to create a certain diagnosis or outcome.” Interesting point.

I can’t help but wonder what would happen if we split that money. What if a death earned  hospitals $10k, but a rehabilitation got them $20k? Who wants to wager the outcome? My guess is that the survival rate would skyrocket.

But I digress. Back to Marlon, he wasn’t making any progress with the current protocols the hospital tried. That’s when the Hampton family stepped in, and demanded better. They wanted the protocol proven effective time after time. Ivermectin, hydroxychloroquine, vitamin C, vitamin D, and zinc.

The hospital only wanted to sedate Marlon, and put him on a ventilator against his will. When the hospital refused the treatment the Hamptons requested, they decided Marlon’s only hope was to get out of the hospital.

Initially, the Hamptons planned to send Marlon home with Hospice.

Sadly, Hospice turned out to not be any better. In fact, they didn’t want to treat Marlon at all considering his desire to take Ivermectin. 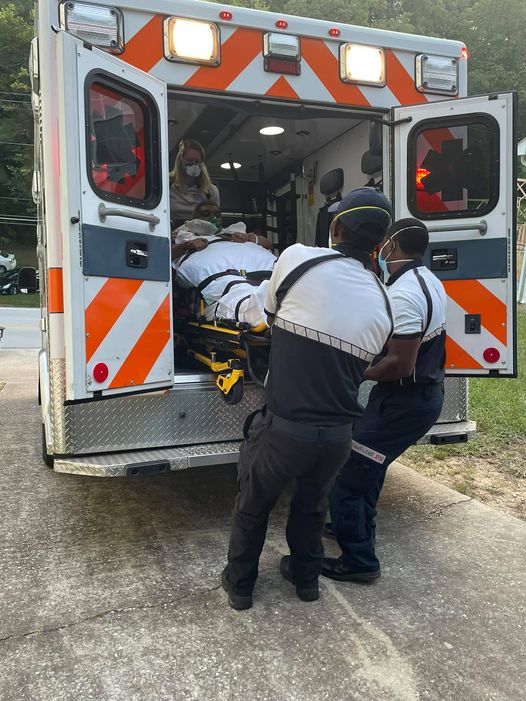 Even after removing my brother from Erlanger and Hospice of Chattanooga telling me that I can’t treat my brother with Ivermectin, Hospice grossly NEGLECTED my brother.
1. Erlanger released my brother at 6:30pm but he was initially scheduled to be released at 1pm.
2. There was no nurse on-site when my brother arrived home. No nurse trained us on how to operate the oxygen machine. PUCKETTS EMS had to train us.
3. After EMS trained us on oxygen machine and turned them on, it tripped a circuit and we had to switch from Hospice machine to Oxygen tank. Praise God this happened because had the breaker not tripped, The EMS wouldn’t have realized that the ONE oxygen tank left by Hospice staff was about EMPTY. EMS had to leave their back up oxygen with us. We fixed the breaker by putting oxygen machines on different outlets. This should have already been determined by hospice when they set up the bed and machine.
4. One of oxygen machines didn’t work! My brother lasted ALL NIGHT on ONE FREAKING MACHINE when he should have had TWO!!!. Nurse shows up the next morning and calls maintenance to fix the second machine. While I’m outside on the phone, Giving her the benefit of the doubt, she mistakenly unplugged my brother from the working machine and plugs him into the [non-working] machine. She leaves and my brothers oxygen plummets.
This was GROSS NEGLIGENCE!!!

I’m going to have to call this an exceptional example of a brother’s love. Patrick took on the establishment to keep his brother alive. And judging by newer posts, Patrick made the right choice.

Erlanger Hospital had him at 81% saturation with hi flow vaportherm at 40 liters per minute at 100% which kept him on the trajectory of the ventilator protocol.
Hampton Home Healthcare and community has him at 93% saturation with regular flow 20 liters per minute at 100%.
My brother has a long way to go but he is alive at home with love ones and not intubated and isolated in Erlanger where most don’t make it out of ther #DeathCare Protocols.
It’s the protocols that’s killing people not COVID!!!! It’s time to expose this foolishness.
I spoke with Patrick today. Unfortunately, no home health agency will help administer the IV drugs. He was able to secure ivermectin. But the moment Hospice starts the IV vitamins, they have to revoke Marlon’s care. Absolutely astonishing that trying to save your brother’s life could actually end his healthcare.
Obviously Hospice isn’t in it to save lives. In fact, they sent a maintenance man over to adjust the oxygen when one of their workers turned it down so low, she left Marlon in serious danger of respiratory distress. If you want to know more of the story, visit Patrick on Facebook. You’ll be shocked by his many encounters during these trying times.

The Blowback is Coming.

The Hamptons are fully aware that their campaign to expose hospitals for their death protocols will likely experience serious consequences, but the truth is the truth. And exposing it shouldn’t make the social media giants try to silence you. But they will.

As we learned last year, in fact, almost a year ago exactly, Facebook thrives on a power trip. Say something they don’t like, and they will brand you as #FakeNews. They unpublished our page that still had almost 600,000 followers. And that’s after two years of Facebook removing followers for us.

Unfortunately, Patrick is preparing for the day his page is removed. I wish I could tell him that is an unlikely move on Facebook’s behalf. But I can’t. Because I know what every conservative now learned the hard way. Truth doesn’t set you free. It paints a target on your back.

Sadly, Facebook is now the world’s largest publisher. And with that title comes power. Too much power. It’s time we reign that in. If Facebook wants to function as a company with the right to edit its users, they should be recategorized as a media company. As such, they would no longer be free of consequences when they practice blatant censorship. Instead, those of us wronged by Facebook could seek a court’s assistance in overcoming the injustice.

Sometimes, all we can do is pray for one another. As such, please join me in a word of prayer for quick and complete healing as Marlon continues to battle covid without the support of the medical community. If you’d like to pitch in and join the fight, you can donate here. 100% of the proceeds will go to Marlon’s care.

It’s quite tragic that political correctness now trumps honest healthcare. Let’s just call it for what it is, a little pomp and circumstance preempting certain death. It’s a good thing the Hamptons decided on a rescue mission instead. Because hospitals can no longer be trusted.