In case you’re wondering if Leftists are winning, I assure you they are not.

Feel free to laugh in the faces of those disingenuous scumbags. Then remind them that Baby Black Jesus ushered in President Donald Trump. And Democrats got so desperate with Trump’s stellar results, they detonated the nukes. They showcased their desperation by cheating Biden into office. Now they live with his results.

But Biden did more than destroy America. His performance highlighted things Leftists were already beginning to thinks about themselves. And this Twitter thread by Michelle Tandler shows why I say daily on my radio show that Democrats are in huge trouble.

The 16 million Democrats and Moderates who left their politics behind to vote for Trump prove my point. Still, what are their concerns?

“We have the most liberal Left-wing government and population in the country and have an $13B budget. Why do we have 8000 people sleeping in the streets?” 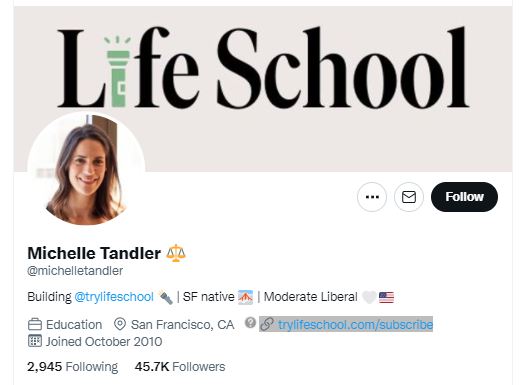 I captured her thread so people wouldn’t accuse me of putting words in her mouth. What I’d like to do now is dissect some of her comments to put in perspective the political change that’s coming. 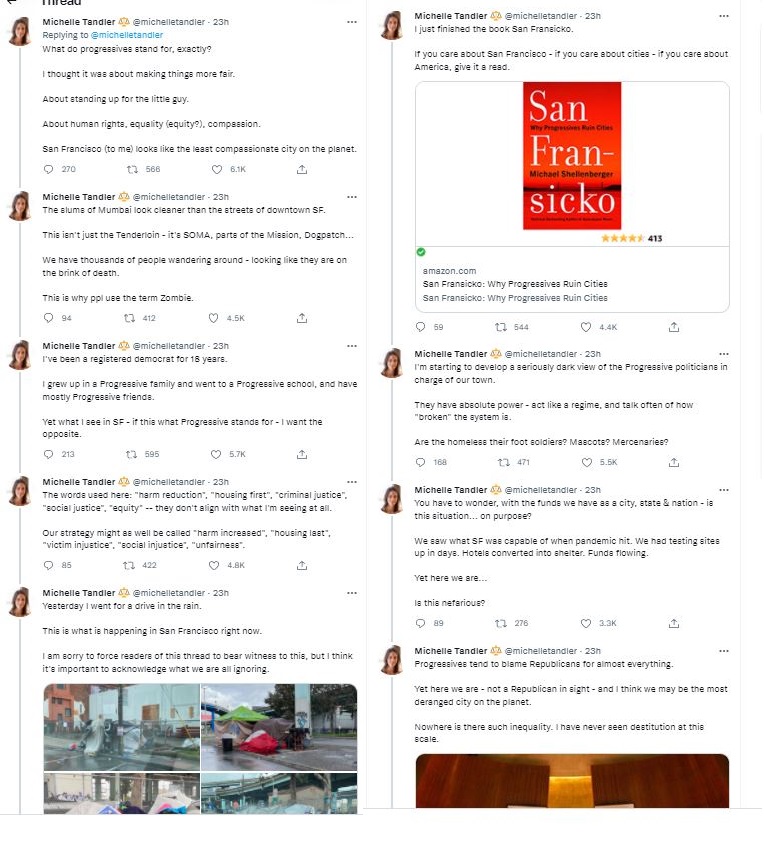 We begin with Tandler calling out a local politician. She blames the woman for what’s happening in the streets, including the increase in crime.

I would really like to know if @fbach4  stands by her advocacy. I personally believe she is the person most responsible for this tragedy unfolding in our streets. But we are all responsible. We are allowing this insanity.

The #1 “advocate” for the homeless, Jennifer Friedenbach – called in to say “Vote no on black lives don’t matter!” She is the head of @TheCoalitionSF  — and has for decades fought against shelters – saying they warehouse people. She is for “housing first”. Well – here we are.

Next, Tandler admits to no longer believing her Leftist politicians. She references her run for student council:

Recently I have been having flashbacks to Junior year when I ran for class representative and lost by five votes. My opponent promised candy vending machines, parties – all kinds of fun things. He won, and didn’t do a darned thing all year.

I’d also like to know why the loudest voices right now against changing our approach are all white progressive women. We have Kate Chatfield from the DA’s office, Jennifer Friedenbach from COH, Hilary Ronen of D8. All yelling about defunding the police. What is this about?

Then Tandler points out the virtue-signaling hypocrites.

Many people in SF came here to “change the world”. They start companies, fight for causes they believe in, recycle & compost, invest in “green” products. This is all wonderful, but what about the humanitarian crisis in our backyard?

One of my friends recently woke up to find a homeless person sleeping on the front step of her multi-million dollar home. I asked her what she did. “We closed the blinds.” I think this is such a metaphor for what’s going on here. San Francisco is turning its head.

Now Tandler wants an answer to these questions. In one tweet, she mentions that there are no Republicans in sight.

So what is going on here? Is this all due to tribalism? Are San Franciscans so desperate to fit in, that they blindly follow the liberal/left-wing causes – even when they make no sense? The book Hate, Inc. suggests as such…

In another tweet, she asks how San Francisco would look under Republican or other leadership. Obviously she thinks the city might actually be better.

She also references the notion that Leftists are afraid to speak out on these issues.

I get messages almost daily from ppl who say they are afraid to speak up for fear of professional ramifications. Some say they are even afraid to like my tweets. I’m afraid to ask questions about the vaccine on Twitter… What kind of “freedom” do we stand for out here?

In college I studied totalitarian governments and how they came to power. The similarities I see to many elements of society today are harrowing. The cancel culture, the “wrongthink”, the adulation of “experts”, the cultishness towards “science”, the blind support by party.

I’ve been critiqued for showcasing SF’s problems – told that I’m “fueling” the “Fox News Narrative.” Accused of using “Trump-like” messaging to rile people up. Am I traitorous for drawing attention to our issues? Is my critique of Progressives unwarranted?

We’re more worked up over gerrymandering than we are about people dying in our streets. My friends in SF read article after article about Trump – and don’t even know who their supervisor is. Since when did local politics become so “pedestrian” so as to not warrant attention?

Tandler is the rule, not the exception.

Leftists have built an environment where their people keep their mouths shut. But they won’t do it at the polls. Not this time. And that’s the one positive we can take from the Biden Administration.