Democrats tell you what dirt exists to your face. All you have to do is pay attention.

For example, when University of Michigan President Mark Schlissel announced an overhaul of sexual misconduct policy changes, particularly the prohibition of relationships between subordinates and supervisors, you should have known that he had no plans on following his rule.

He said at the Board of Regents meeting at that time, that there would be zero tolerance for someone in a leadership position to “solicit a personal or romantic relationship with someone they have a supervisory authority or career influence over.” Would it surprise you to learn that Schlissel was having the exact relationship with a subordinate?

“That’s exceptionally important because of the power dynamic. It makes it difficult sometimes for folks to effectively say no, then you put an employee in a very difficult circumstance.”

Over the weekend, the regents removed Schlissel for cause as president after investigating an inappropriate relationship he had with a university employee.

Shocking how? That some Leftist told people there is gambling in the casino?

Sadly, if you Google “university scandals 2021” the list is quite long. Imagine if you added a few more years to the inquiry. But what do you expect from all this “liberal education?” 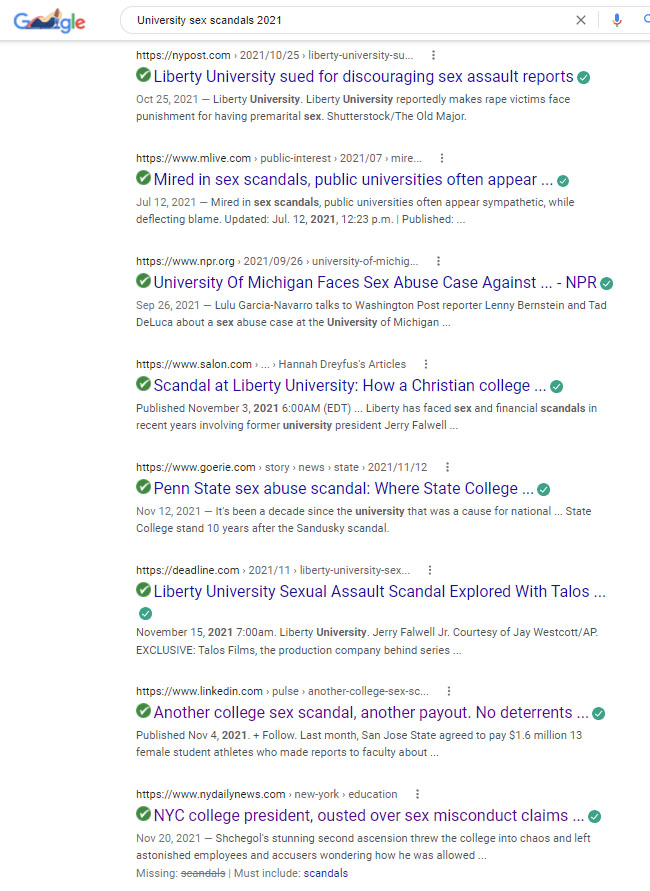 A recent article on LinkedIn explains why this keeps happening. Clearly, there isn’t enough punishment to fit the crime. Leftists pass out a slap on the wrist and look the other way.

Last month, San Jose State agreed to pay $1.6 million 13 female student athletes who made reports to faculty about suffering sexual assault from an athletic trainer. The university president has resigned in recognition of the school’s failure to properly protect its students.

The accused is San Jose State’s then Director of Sports Medicine, Scott Shaw. Initial reports dating back to 2006 document complaints of Shaw inappropriately touching at least 23 female-student athletes in his care. Victims said they were repeatedly subjected to unwelcome fondling of their breasts, buttocks, and pubic areas by Shaw. The abuse is said to have taken place on the school’s campus. Shaw resigned in 2020 after allegations resurfaced, but has not faced any charges as of yet.

If you ask me, that’s completely unacceptable. In fact, predators likely see the lack of consequences as an invitation to pounce on young women.

In a sadly “all too familiar” scenario, whistleblowers who expressed concern for the university’s handling of the incident were punished. After overhearing athletes refer to Shaw as a “Creep” and discussing his actions, a swim coach went to his superiors, and discovered that previous complaints were not thoroughly investigated and swept under the rug. After bringing this to the attention of the NCAA, administrators ordered his superior to discipline the swim coach. When the superior refused and consulted a lawyer on the legality of such an action, his role was terminated at the school.

After a federal investigation was opened under Title IX, the previous 23 student complaints were rediscovered. Investigators lambasted the school for not only allowing Shaw to continue working with students, but also found the two whistleblower firings to be retaliatory.

Most of these creeps never learn their lesson. Last September, “three years after he was forced out as president of ASA College in Brooklyn amid a flurry of sexual misconduct allegations, Alex Shchegol met with the college’s Board of Trustees to beg for a second chance.”

And he tried to sell this idea with the expected excuse of “sex addiction.”

According to the News:

At least 10 female ASA students and employees had accused Shchegol of sexual misconduct including rape, sending unwanted pictures of his penis, and coercing students who relied on him for visas or employment into sex, according to lawsuits, draft lawsuits, letters from lawyers, and college documents reviewed by the Daily News. The allegations had resulted in more than $2 million in out-of-court settlements, according to a letter from the college’s board to the NYC Commission on Human Rights obtained by the News.

Despite the laundry list of accusations, Shchegol insisted at the board meeting he was still the right man to lead ASA, a for-profit college that focuses on prepping its 3,000 students at campuses in New York City and Florida for jobs in tech, healthcare, business and criminal justice, sources present said.

Shchegol referenced a letter from a sex addiction therapist affirming she’d worked with him on concepts like “victim empathy” and “accountability.” The letter, which was obtained by The News, stated he now “understood how he should behave with employees and students.”

Obviously the board rejected his plea. But the story doesn’t end there.

Shchegol had a crooked plan.

At a non-profit college, where the board of trustees has final say over school governance, that decisive rejection likely would’ve put an end to Shchegol’s bid to reclaim the presidency. But in the for-profit college sector, where ultimate power is concentrated with the owner, Shchegol — who’s had full financial control of ASA since he founded the school in 1985 — held a trump card.

In early October, Shchegol used his legal authority as sole owner of ASA to remove five members of the seven-member board who had voted against his reinstatement. He replaced them with hand-picked allies including former Brooklyn Democratic Party boss and state Assemblyman Frank Seddio, who college insiders say is an old friend of Shchegol’s. He also appointed businessman Albert Tylis, who sources said is a nephew of Shchegol’s wife.

Two members of the old board were spared: Diana Reyna — a former City Council member and ex-deputy to Brooklyn Borough President Eric Adams — and New York City Health and Hospitals official Xiomara Wallace. Reyna declined to comment and Wallace could not be reached.

On Oct. 11, the new board voted to reinstate Shchegol.

Shchegol, who was accused in a lawsuit of threatening to sabotage a student’s visa application when she refused to have sex with him, was atop ASA college once again.

Ang get this, now the guy maintains his innocence, which is ironic because his sex therapists claims to have cured him. In other words, his newly declared innocence directly contradicts his “proof” that he is now WOKE and understands the #MeToo movement.

However, those are the lies of the left. Liberals couldn’t tell the truth if their lives depended on it. Just look at all they did to put Joe Biden in office. His victory is the biggest lie ever told in this country. Obviously, we can’t believe one word the man says. Which makes for a very sad state of the union.