Despite what the vax Nazis and others around the world tried in The Great Reset, the people spoke. And the people won.

The Canadian truckers sparked a protest, and proved that governments work for the citizens and not the other way around. In fact, it has morphed into a global movement. And as this article notes, Canada’s government blinked.

This is the covid-19 update from the Province of Alberta for February 1, 2022.

In his address Premier Jason Kenney announced that hospitalizations appear to be plateauing and once that is confirmed over the coming days, the province will announce a three part plan to eliminate covid restrictions.  Vaccine mandates and the Restriction Exemption Program will be expected to disappear in the first part of that plan.
We found this tweet that reported the information back on Feb 5. 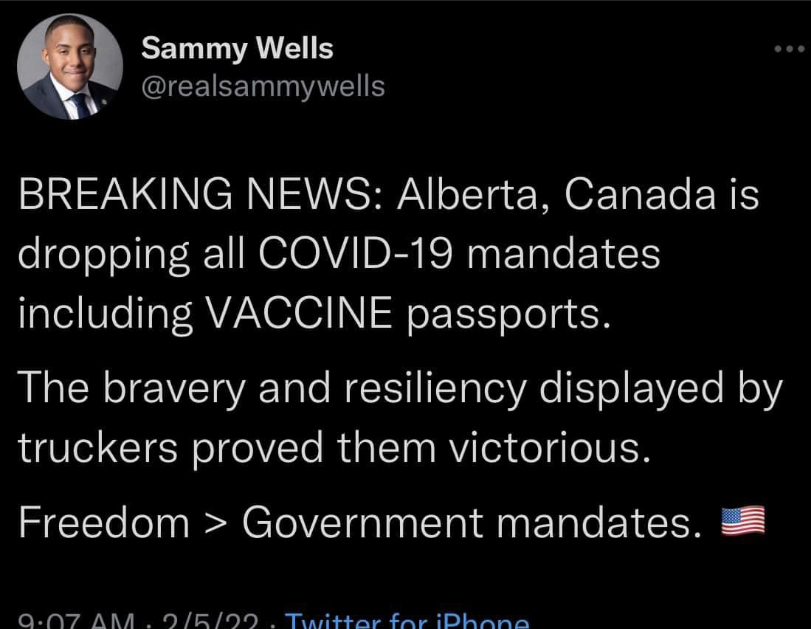 I suggest Trudeau meet with the truckers. But more importantly, Trudeau needs to give up the New World Order nonsense. Especially considering some of Canada’s problems:

• Stricter public health rules aimed at slowing the spread of the COVID-19 omicron variant were blamed for the loss of 200,000 Canadian jobs in January, but they are temporary, economists say. The number is the biggest job loss since January 2021 when 207,800 jobs disappeared, Statistics Canada said. The number of lost jobs pushed the unemployment rate to 6.5% last month compared with 6.0% in December. It reflected the number of people temporarily laid off or scheduled to start a job soon and one in 10 workers who were off sick.

• Canada’s dollar is lower at 75 cents U.S. while the U.S. dollar returns $1.27 in Canadian funds, before exchange fees.

• Canadian stock markets are mixed, with the Toronto index down at 21,330 on Friday while the TSX Venture index was up at 853 points.

Clearly Trudeau has massive problems. So he doesn’t need to add supply-chain issues to the already long list.

While this is no reason for panic, as it hoovers inside this range. It is a reason for concern, because the Canadian dollar isn’t gaining on the American dollar although Biden is ruining the country. The situation really is two idiots seeing who can ruin an economy the fastest.