The Democrats didn’t think The Big Cheat through to its logical conclusion. Or did they?

The only things a Biden presidency would bring are a torpedoed American economy and a world left in devastation. Perhaps that was the mission of the Democrats and other Leftists.

As the scam of Wuflu winds down, Team Demento created another distraction. They got Russia to target Ukraine, and I’m convinced Hunter Biden will pop up somewhere in this equation. Perhaps Putin will install Hunter the Crackhead as the new PM of Russia’s soon-to-be latest territorial acquisition.

Meanwhile Putin will monitor his oil production and count his money, which incidentally has doubled under Biden. SWIFT “sanctions” notwithstanding, Biden seems to be making out like a bandit. And his acquisition of Ukraine only makes things better.

The war between Ukraine and Russia will make the world’s hunger crisis even tougher to fight because Ukraine produces lots of food. Called Europe’s bread basket -Ukraine supplies wheat and corn to much of the world. The war will undoubtedly exacerbate the already strained supply chain. Interruption in food will likely create yet another global humanitarian crisis.

Who will be most impacted? According to Gallup data, people in countries reliant on wheat from Ukraine or Russia, where large segments of their populations struggled to afford food before the war broke out. Countries on this list, include Egypt, Turkey and Kenya. Worse, many countries impacted by the food disruptions currently deal with political instability and conflict. Imagine what will happen as the situation worsens by a “hangry” citizenry.

Biden is starving the world and creating more wars.

Biden is a one-man United Nations, and just as ineffective. The group chartered to end wars has accomplished nothing. Quite the opposite in fact. And Joe Biden, the Left’s great healer, has ushered in yet another war. Perhaps Barack Obama will loan Biden his Nobel Peace Prize? 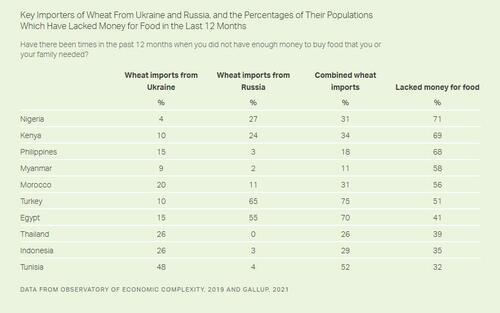 At the top of the list is Turkey which received a full 75% of its wheat imports from Russia and Ukraine in 2019, ranking it among the most dependent on sources from those countries. In 2021, a slim majority of Turks (51%) reported being unable to afford food in the past 12 months. Turkey’s current vulnerability may be further heightened by its lingering economic crisis and high levels of inflation.

The second most reliant country, Egypt, received 70% of the country’s grain imports from Russia and Ukraine in 2019. More than four in 10 (41%) Egyptians in 2021 reported lacking money for food at some point in the last 12 months. This measure was on the higher end of Gallup’s trend for the issue but lower than the record-high 48% of Egyptians that said so in 2016.

I wonder how many leftists have a stake in wheat futures?

While consumers will take a huge hit, leaving many hungry, producers will rake it in. The Big Cheat clearly had oil futures in mind. It’s no stretch to think wheat was factored into the equation.

Wheat futures have surged by more than 40% over the last five days, on track for the biggest weekly rise since at least 1959 as Russia’s invasion of Ukraine crimps exports of the crucial food grain and stokes global inflation fears.

“I am convinced it is going to be the biggest supply shock to global grain markets in my lifetime,” tweeted Scott Irwin, agricultural economist at the University of Illinois, on Wednesday.

“As just one data point. It has been reported that there are 600 million bushels of corn contracted for export that is currently trapped in Ukraine,” he wrote. “And what about 2022 [production]?”

Ukraine farmers likely won’t be able to plant this year. First it will affect Europe, but it will spread across the globe. It’s no longer a question of “if,” it’s a question of “when.”