The Left won’t go down without a fight. And when it comes to Hunter Biden’s laptop, they have a serious boxing match on their hands.

First, leftists must overcome their repeated denials that the laptop was “Russian misinformation”. Joe Biden and his cohorts knew their side blatantly lied about this. All along, it was clear that the laptop belonged to Hunter.

So with that lie exploding in their faces, the left concocts another theory.

According to the New York Post, the spin is in.

As Hunter Biden waits for the outcome of the Delaware criminal federal investigation into his taxes and overseas business dealings to be made public, new allies are attempting to flip the script on the scandal of his infamous laptop.

Kevin Morris, the generous Los Angeles entertainment lawyer who loaned Hunter more than $2 million to pay off his tax debts, has launched a sensational public-relations campaign to discredit the laptop and divert attention from its damning revelations of the Biden family’s international influence-peddling scheme.

Morris, 58, has assembled a team of 30 lawyers and investigators to help his friend Hunter, 52, “blunt the impact” of the Delaware probe, according to CBS News.

Can you imagine needing a coverup so badly, that you must try to prove a story false; a story that is irrefutably true?

Oh wait, yes. Russian collusion by Trump. Because Democrats like Adam Schiff continue to push this now thoroughly debunked lie. And what did we learn most recently in the “Russian collusion” saga? We learned that Hillary Clinton issued the ‘code red’.

But things are bad for Team Hunter, as they have a mole:

But leaks from inside the Morris camp, and a hand-scrawled mind map he has shared with confidants, show a chaotic disinformation project attempting to rewrite the story of the laptop’s origins.

The counternarrative Morris is mounting on Hunter’s behalf has nothing to do with the damning contents of the laptop, which have been repeatedly verified as authentic by multiple media organizations since The Post broke the story in October 2020.

Instead, Hunter’s team is attempting to sow confusion about how the laptop became public, by denying that he abandoned his laptop in John Paul Mac Isaac’s Delaware repair shop on April 12, 2019, and claiming his private information was somehow stolen, “hacked” or “cloned.”

But the chain of custody of that laptop has been well established by The Post. 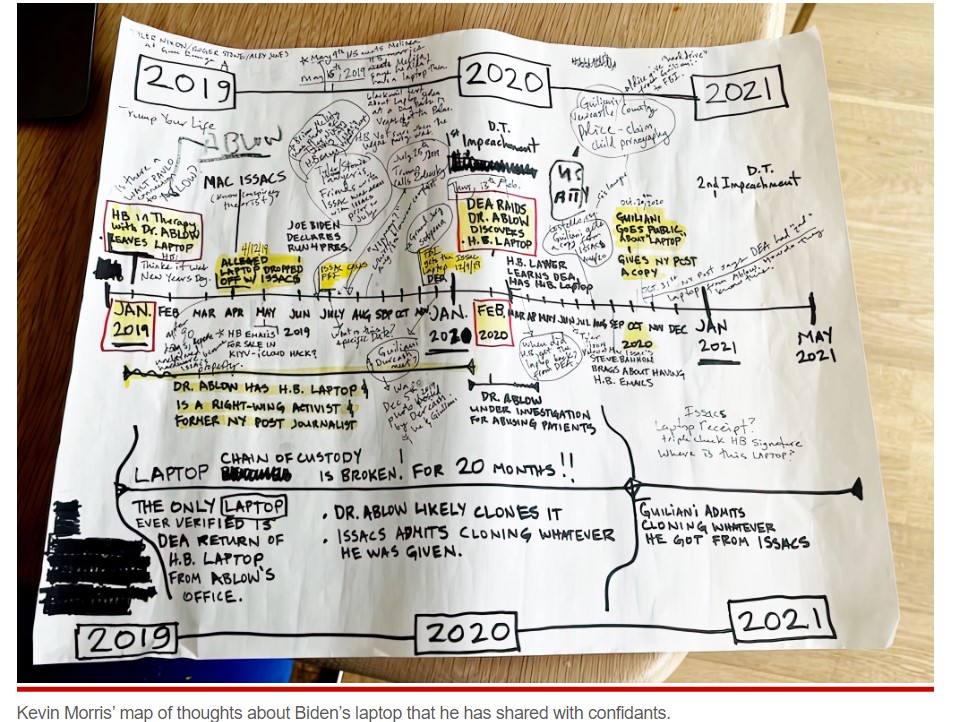 By now, only the most braindead Leftists (some remain) believe the Biden family lies about their chief crackhead and his laptop.

As for the mole who leaked the notes, this is the same type of person who will not allow Democrats to rig any more elections.

Hunter Biden is going down. And he will take The Big Guy with him. And The Big Guy will drag down the Democrats, exposing them for what they are and have always been. Evil.