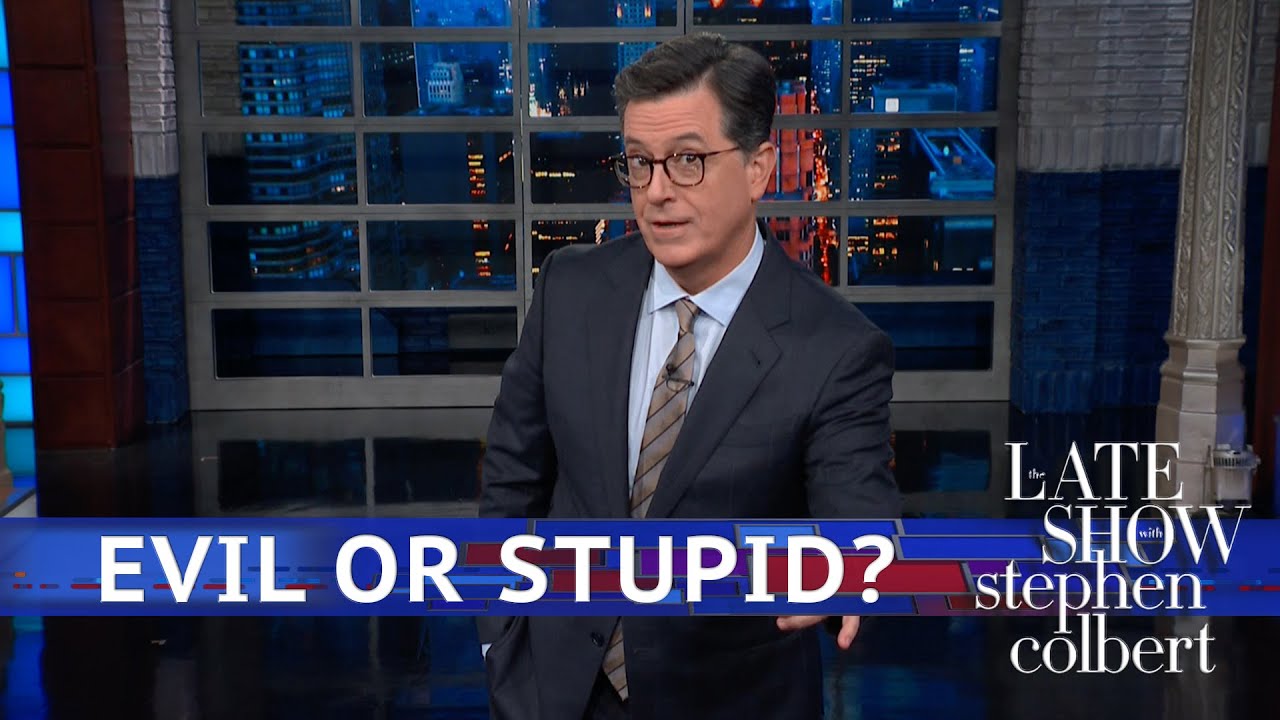 CBS’ unfunny, pro-liberal, late-night political hack Stephen Colbert sanctimoniously went before the TV-cameras after the January 6, 2021 protests to lecture Conservatives, and America in general, about behavior and ‘decency’.

The ever-holier-than-thou Colbert smugly told his (dwindling) audience at the time:

“Lord have mercy,” Colbert began. “Hey, Republicans who supported this president—especially the ones in the joint session of Congress today: have you had enough? After five years of coddling this president’s fascist rhetoric, guess whose followers wanna burn down the Reichstag?”

“It’s a horrifying day that will go down in U.S. history—however much longer that is,” he continued.

But how the ‘mighty’ have fallen.  Because now it is Colbert that has some explaining to do.

Days after Democrats on the House January 6 Committee called on Rep. Barry Loudermilk‘s, R-Ga, to answer questions about a tour he gave the day before the Capitol riot, several people, including CBS employees who work Colbert’s late-night program were arrested for unlawful entry to the complex.

Late Thursday, the individuals, including “Triumph, the Insult Comic Dog” puppeteer Robert Smigel – a frequent guest of Colbert’s — were not credentialed to be walking around without an escort, a House Republican source told Fox News. Others arrested included Colbert writer Josh Comers and associate producer Allison Martinez.

The group reportedly banged on doors of several Republican offices –  including that of Minority Leader Kevin McCarthy of California, Jim Jordan of Ohio and Lauren Boebert of Colorado — as they allegedly filmed a skit for Colbert’s “Late Show” program that was to center around the January 6 hearings.

The group was cleared into the complex by staffers for Rep. Jake Auchincloss, D-Mass., and House January 6 Committee Member Adam Schiff, D-Calif.

11) USCP: “They were charged with Unlawful Entry.  This is an active criminal investigation, and may result in additional criminal charges after consultation with the U.S. Attorney.”

Colbert made critiquing the events surrounding January 6, and the ‘star chamber-eques’ hearings, the cornerstone of his late night show.  Now Colbert and his people stand charged for the very crimes that thousands of Americans who were exercising their 1st Amendment rights, most of whom never entered the US Capitol on that day, are now in jail.

Around six dozen defendants who have been charged in Jan. 6 cases remain jailed awaiting trial, according to an Associated Press tally. More than 200 people have pleaded guilty and more than 80 have already been sentenced.

More than 700 people have been charged in the Jan. 6 insurrection, according to the Justice Department. They were arrested mostly on federal charges ranging from unlawfully entering the Capitol to seditious conspiracy. Suspects include more than three dozen members and associates of right-wing extremist groups such as the Proud Boys and the Oath Keepers.

Each of the suspects charged was arrested based on a criminal complaint signed by a federal judge and requiring investigators prove they have probable cause the person committed a federal crime, or an indictment from a grand jury. Information on individual cases is publicly available. The charges can be seen for each defendant.

A charge in a criminal case is an accusation of a crime.

So why was Colbert’s crew there?  How did they get into a federal building after hours without the proper clearance?  Who were the accomplices?  What were their intentions?

The Late Show Stephen Colbert is a late-night comedy show that airs on CBS. A source familiar told the Washington Examiner that the Late Show staff were initially let into the Capitol complex on Thursday for pre-arranged interviews with members of Congress, but “overstayed their welcome.”

The source added. “They were not credentialed to be walking around without an escort, and they were banging on the doors of the offices of Republicans like Kevin McCarthy, Jim Jordan and Lauren Boebert as they were filming a skit on the Jan. 6 hearings – a topic the Left and woke media keep trying to use to distract the American People from issues like inflation, crime, and the border.”

All Equal Under The Law?

These trespassers from the Colbert show are now being charged for the same crimes as the January 6 protesters.  Many of the protesters have been given felony prison sentences.

And what about Colbert himself?  What was his role in this ‘conspiracy’?  What did Colbert know, and when did he know it?

So when will Adam Schiff and Liz Cheney hold those hearings?  Has Adam Kinzinger stopped crying?  Was AOC in fear for her life during the rampage?  The American people deserve answers.

The precedence has been set, and is being broadcasted on NBC primetime.