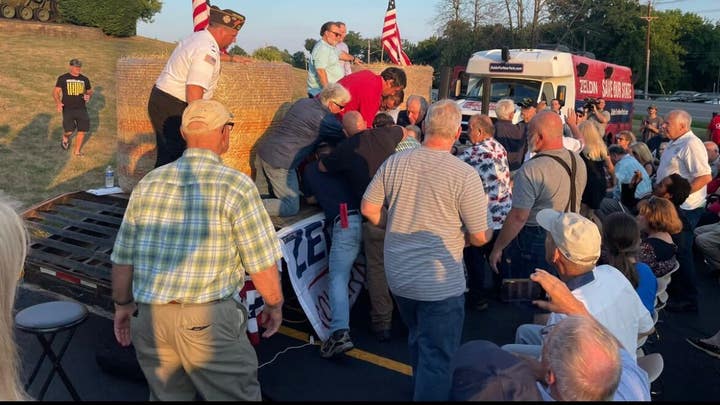 Congressman Lee Zeldin, the Republican nominee for Governor of New York, was attacked at a Republican rally near Rochester.

The videos show Mr. Zeldin, standing on the bed of a truck, addressing supporters gathered outside a V.F.W. hall in Fairport, N.Y., when a man approaches him slowly from the right, grabs him by the arm and brandishes a weapon. Mr. Zeldin responds by grabbing the man’s wrist and is then joined by several men in containing the attacker.

He has made crime a centerpiece of his campaign for governor, using apocalyptic terms to paint a dark picture of the state of public safety and to appeal to New Yorkers’ sense of unease. He has specifically pinned blame on rising crime on Democrats and Ms. Hochul, calling on them to reinstate most cash bail and ratchet up policing.

Governor Kathy Hochul had doxed Zeldin earlier by releasing his entire schedule on her social media and encouraging her supported to crash his events.

David G. Jakubonis, an Iraq War veteran is the suspect in the assault of the sitting member of Congress, and gubernatorial candidate for a major state.  Jakubonis was immediately released from jail without bail!

A man who allegedly attacked Rep. Lee Zeldin, R-N.Y., with a sharp object at a campaign stop in Perinton, New York, Thursday evening was charged with a felony and released from custody within hours of his arrest, the Monroe County Sheriff’s Department said.

The suspect, identified as David G. Jakubonis, 43 of Fairport, N.Y., was charged with attempted assault in the second degree.  He was arraigned in Perinton Town Court and released on his own recognizance, the sheriff’s department said.

It all started with the “‘scoff’ heard around the world”.

Democrats won’t be happy until a Republican lawmaker is dead.

But this cannot be allowed to distract the country’s attention from Jan6.  There are voters that need to be swayed before November!