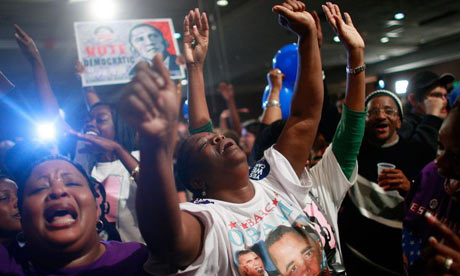 Interesting points from Your Black World — a refreshingly unexpected critique of black America.

Obama and Sharpton and Sheila Jackson Lee (some people can really ruin a good name) revel in calling people racist. Louis Farrakhan joyfully proclaims whites are “devils.”  The Democrat party loves the stereotypes that keep blacks on their plantation: no questions or second guessing allowed.

What happened to judging a person by the content of their character, rather than the color of their skin? Why is it that, though the goal is a “color-blind” society, the Congressional Black Caucus rants and raves for reparations and quotas based on skin color alone?

Clearly the MSM won’t draw any more attention than is absolutely necessary to the millions of blacks who live tremendous lives predicated upon good and godly AND conservative principles.

Rather, the Main Stream Media highlights daily the Jesse Jacksons and the Hank “Guam is Tipping Over” Johnsons who say ridiculous things intended to create constant victim mentality and anger at whites and at black conservatives.

The Your Black World team had a meeting and decided upon a few ways that we could tell that black America has lost it’s mind under President Obama.  We don’t know which way is up or down, and it seems that good politics has been thrown out the window.  So, here’s a list of ways that we know that black people have lost their minds over the last five years.  No, the list is not meant to be funny:

2) When every black commentator on MSNBC and TheGrio always supports every policy put out by the Obama Administration.  We expect that, pretty soon, they’ll all grow perms like Al Sharpton.