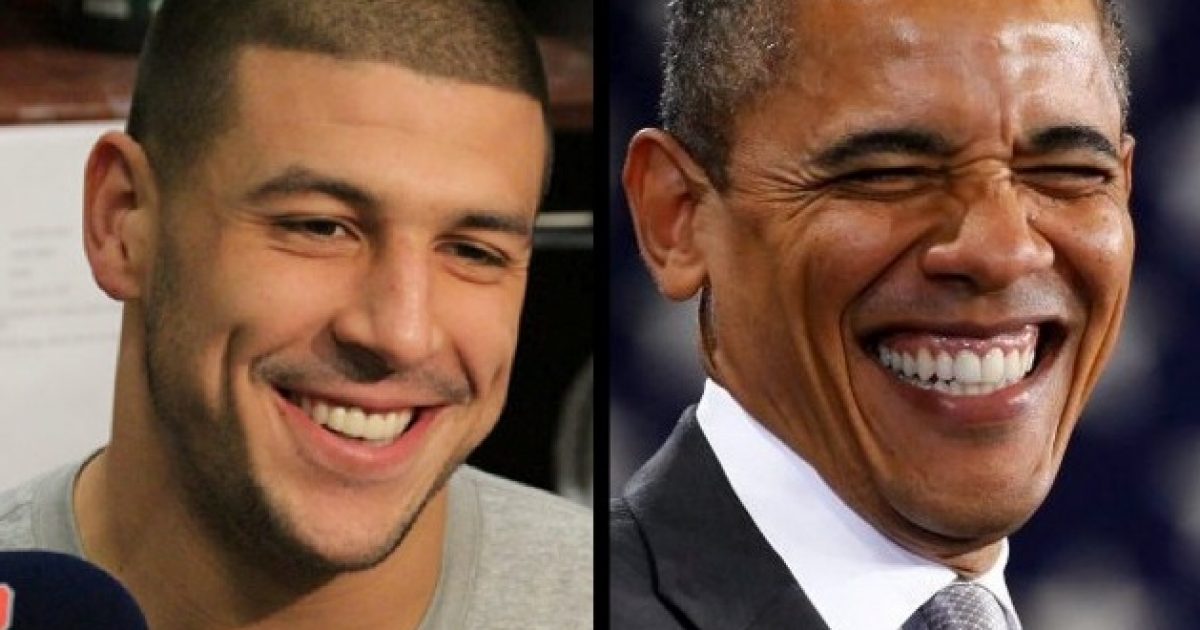 America is finding out too late that Barack Obama, the popular politician with the big smile and sunny personality, much like football star Aaron Hernandez is not who he has pretended to be.

It’s a harsh comparison, but  is Barack Obama turning out to be the Aaron Hernandez of politics, with America as his Odin Lloyd?

One day Odin Lloyd was partying with Aaron Hernandez, and the next day Hernandez shot Mr. Lloyd dead.  For more than four years, America has raised a cup of good cheer with Barack Obama, and meanwhile he’s slowly killing us. If he succeeds, we’ll end up like Odin: face down in a field, taken out by someone we were impressed with and thought was a friend.

According to prosecutors, the execution was prompted by a fight between two friends, underscore “friends,” in a Boston nightclub.  Hernandez stewed for three days, then gathered up two other “friends” and picked up a clueless Odin at 2:30 am.

Here’s how clueless Odin was:  Clearly impressed with the company he was keeping, acting like a beguiled Obama voter, Odin allegedly texted a family member, bragging, “Did you see who I am with?”  Yeah, we see who you’re with – a guy who’s acting like your best buddy with plans to kill you.

While Odin was bragging about his high-status friends, Aaron was steering his vehicle toward the gallows in a remote industrial park, smiling, but fully intent on blowing Odin away.

Once Lloyd was in a vulnerable position, he was shot in the back and after he fell, for good measure, two fatal shots followed.  Hernandez, fully aware of what he was doing, orchestrated the crime and then attempted to dispose of the weapon.

After his arrest Hernandez exhibited zero emotion as prosecutors described what happened, all of which was variously caught on surveillance cameras, in text messages, and by witness accounts.

Which brings us back to why Barack Obama is the Aaron Hernandez of politics and why America has been behaving like Odin Lloyd.

Barack Obama does not take kindly to differing views or challenges, and for the last four years America might as well have been carousing in a pub with the president, who deep down holds animosity towards those he pretends are his friends.

During his first term, America was ebullient over Barack Obama, and for all intents and purposes the nation was acting like Odin Lloyd tweeting to his friends, “Did you see who I am with?”  Yet, while the braggadocio was going on, Barack was steering America toward an isolated spot with full intent to end life in America as we know it.

Many people realized after Obama’s first term that the guy with the mysterious background wasn’t who he presented himself to be.  Most liberals and millions of clueless Americans still haven’t realized it.

When 2012 rolled around and it was time for reelection, voters sounded like Hernandez’s neighbor Dan McKin, who said, “Innocent until proven guilty, that’s what I say. I’ve met him before, he seems like a great guy. He’s all smiles, just a nice guy and I’m surprised.”  So America decided to give Obama another chance and reelected him.

Now six months into his second term, with Barack Obama doing the driving America is closer than ever to that remote spot where his plan is to point his political weapon, filled with Obamacare, amnesty for illegals, gay marriage, Constitutional infidelity, climate change regulations, and much more, right at America’s back, pull the trigger, and take us out.

Sad to say it, but Barack Obama is the Aaron Hernandez of politics.

Obama is arrogant, calculating, emotionless, and vindictive, full of hostility, and yet, while hiding that he’s got political, social, and economic annihilation on his mind, is still able to captivate easily impressed Americans who insist on behaving like Odin Lloyd.

Fauci Appears to Downplay Concern Over Omicron Variant
The Lid

Kevin Jackson - December 5, 2021
Why would any sane person work for Kamala Harris? The answer is: none would. Ergo, Leftists are insane. Nobody, repeat nobody wants to work for...