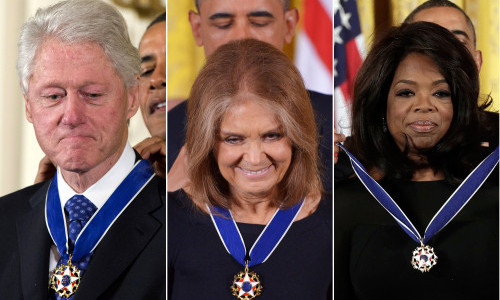 At the 2013 Presidential Medal of Freedom ceremony held in the East Room of the White House, 2009 Nobel Peace Prize winner Barack Obama chose to honor more than just a few ‘winners.’

The colorful collection attending the Medal of Freedom ceremony was a cacophony of politically correct Democrat darlings, with a journalist, a RINO, two deceased homosexuals, a few Latinos, and an occasional black sports figure thrown in for good measure.

In addition to the eclectic array of 13 relatively benign forgers of freedom, three controversial awards also went to a race-baiting billionaire, a misogynist former president, and an abortion-supporting, man-hating women’s rights activist.

It was three centuries ago that English Bible commentator and Presbyterian minister, Matthew Henry, wrote:

“The wickedness of a people is great indeed when noted sinners are men renowned among them.”

Henry’s words sum up why Bill Clinton, Oprah Winfrey, and Gloria Steinem ended up being commended by the president.

As for Bill Clinton, there’s no arguing that the 42nd president of the United States is a “noted sinner.” Even still, the often-dishonorable Honorable Bill Clinton does deserve a medal.