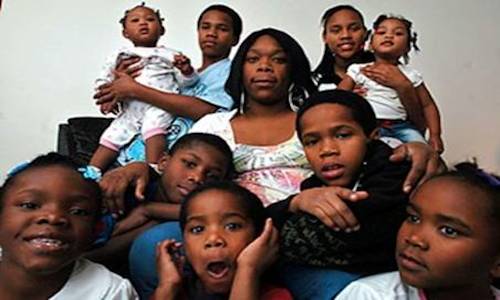 Black women can learn a LOT from Leftist white women, when it comes to building wealth. And what better example than Wendy Davis.

Wendy Davis has a simple rule: pick men who are better than you. And that’s exactly what Wendy Davis did.

When Wendy Russell met Jeff Davis, she had a “burden” of her own, at least according to Barack Obama. Yes, then-Wendy Russell had a baby by another hombre.

It appears that Wendy “Abortion Barbie” Davis’s stance on killing babies and her famous filibuster to block Senate Bill #5 to “protect women’s reproductive rights” might be based on the perception that her “burden” necessitated she rely on a man.

If only Abortion Barbie  had demonstrated the foresight to kill her first child–the child used to trap husband #1–she might have more credibility in her stance to “protect the reproductive rights” of women.

However, Wendy’s nefarious plan to use her “burden” backfired. Wendy found out that her high school sweetheart was a deadbeat who could not further her ambitions. She needed a Plan B.

Introducing the two-part Plan B:

Black Leftist women pay attention. Because this is the key part of Wendy’s plan.

She wasted no time, going right to work. Wendy sought her prey and found her “mark”. The unwitting rube was Jeff Davis, a man 13 years her senior and looking for eye-candy. Jeff soon became husband #2 as soon as Wendy fought her way out of the trailer park.

For the black sisters, note the next move for Wendy: education.

Quick to impress his new trophy wife, hubby #2 Jeff paid for Wendy’s last two years of education at TCU, one of the most expensive colleges in Texas. With that burden handled, [Wendy’s Burden #2 for those keeping count], Wendy set off for the big time, Harvard.

While a Harvard education is as meaningless as toilet paper, the paper trail is important in the eyes of Leftist elitists. Wendy knew this, and set on a path to have Jeff fund her next career move.

So while Wendy went to Harvard, Jeff stayed home caring for Wendy Burden #1, as well as Wendy (and Jeff’s) Burden #3 (their child), while paying for the new Wendy Burden #4 (Wendy’s Harvard tuition).

Wendy found it necessary to obtain comfort with other men, as Jeff dutifully cared for all those burdens.

The Liberal’s new poster child and 21st Century Mary Tyler Moore (apologies Mary) was now ready to “make it after all.”

Wendy’s life shines as a beacon of self-sacrifice and determination…BY HER HUSBAND!

Holy Hillary, had it not been for the Dallas Morning News (a Liberal rag) exposing this lying wench, she might have been elected governor of Texas.

The Equity Center had the gall to award a champion of baby killing the “Champion for Children Award.” And the Texas Association of OB-GYNs bestowed on Davis their “Texas Women’s Health Champion Award.”

Finally, Davis was chosen by the readers of Fort Worth Weekly as the “Best Servant of the People”.

Too bad the unborn can’t vote.

I don’t blame Wendy for trying to pull a fast one. Who wants that deceitful piece of crap “reality” life of hers! But then again, politics and Leftism is all about making yourself appear bigger than life. Especially when you know you are a fraud. Wendy Davis excelled at appearances, like all Leftists.