Despite complaints from Google and Facebook about fairness, these social media giants were in the bag for Clinton.

Conservatives have said time and time again that social media giants don’t like us. They all claim to want the free flow of information. Further, they say all they want is truth. Yet, they unlevel the playing field, siding with Leftists every time.

We learned from Free Beacon, that a Google executive blatantly displayed his support of Clinton.

Google came under fire earlier this year for allegedly altering search results to paint Hillary Clinton in a more favorable light than Donald Trump. Schmidt stated at the time that Google did not pick sides in the presidential race. 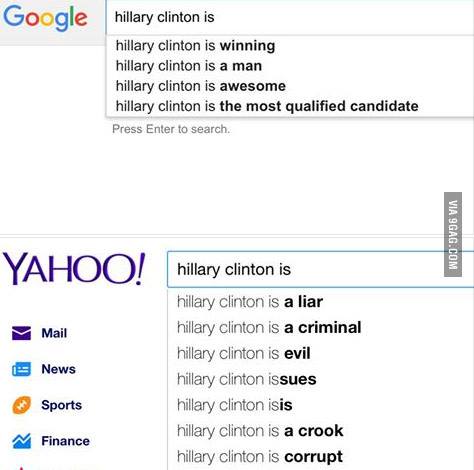 Here are a few examples of what people are talking about, when you compare Google’s search results for Clinton versus Yahoo’s.

Further, we added Bing, just so you can see that Yahoo wasn’t biased against Clinton.

These results are supposedly based on what people want to see.

Yet, according to the article, Schmidt said at the time:

“We have not taken a position on the American election and nor do I expect us to.”

Nor do I expect us to? What an assurance! The largest search engine in existence, and one of the wealthiest organization was making up its mind about whether to interfere?

The article goes on to illuminate Schmidt’s role,

Despite this assurance, Schmidt provided funding to a tech startup called The Groundwork, one of the Clinton campaign’s biggest vendors.

Michael Slaby, the Obama campaign’s chief integration and innovation officer, developed The Groundwork through a company he co-founded called Timshel. The Clinton campaign paid the group $600,000 throughout the election cycle.

And if that wasn’t enough, it was from WikiLeaks, that Schmidt not only funded a Clinton campaign vendor, but helped with the campaign’s technology strategy.

The revelation was contained in a memo sent by Robby Mook, Clinton’s campaign manager, to Cheryl Mills, David Plouffe, and John Podesta on Oct. 26, 2014. The memo’s author was Teddy Goff, Clinton’s former chief digital strategist. It was addressed to Clinton.

“I have been kept apprised of the work being done by Eric Schmidt’s group and others working directly and indirectly with your team. On the whole, I am comfortable with where we stand and confident in our roadmap to launch day and beyond,” Goff wrote at one point.

Conservatives are too trusting of social media. For the most part, these are owned and run by Millennials who have been brainwashed by Liberalism. Most of them have no idea of the power they possess with their technologies. As more and more uses are discovered, things will not improve for Conservatives.

These young men and women also have the fortunes to back up their naivete.

How Leftists CRIPPLE the Next Generation
The Black Sphere