Remember when Leftists declared that climate change is the biggest problem facing the world today.

Here’s Obama declaring in 2014 with this insane statement.

Even Leftists found Obama incredulous. So he was asked to clarify his comments.

Thus, Obama explained that man-made terror can be defeated. But the oceans rising can’t be defeated by the military or interestingly, more money.

Surprise, as Obama inadvertently predicted the current riots in Paris.

He mentions that when people can’t feed their families, or in the case of the French, sicken of the New World Order forcing illegals down their throats, they get upset.

John Kerry too recognizes the threat of climate change.

Kerry admits that other potential threats that exist. However, he still declares global climate change the biggest threat facing mankind.

Because if the riots escalate, Macron won’t call on meteorologists to quell the angry hoards. Instead he will use a more tried and true method: the military.

Where’s an earthquake or a typhoon when you need it? Over 100,000 yellow jackets running around Paris defacing national monuments, and not a storm cloud in sight. At this point, even a targeted mudslide could be justified.

Consider the climate arsenal the global Leftists have at their disposal.

Hurricanes, cyclones, tornadoes, volcanic eruptions, tidal waves, tsunamis, along with the  earthquakes, typhoons and mudslides I already mentioned. Hell, even a heatwave or a freak snowstorm could help stem the violence.

What did Macron do with that “easy weather” button that cost American taxpayers billions?

One would think that in this time of crisis, the members of the Paris Climate Accord could figure something out to stop the nonsense. After all, the world has paid for climate to step in and do its job. Where is this mean-spirited weather?

If Climate doesn’t show up to kick the crap out of protesters, Leftists will just blame Trump.

After, all, Trump pulled the United States out of the Paris Climate Accord. So these riots rest on his Earth-destroying shoulders.

Had the U.S. kept putting money in the kitty, the French could have paid their poor. Then the EU elite could continue to rationalize the importation of Muslim terrorists. Nobody would be the wiser, as climate change would continue to be the biggest potential terror issue on the planet. Well, at least until the Muslim takeover in about a decade.

But Trump upended that working strategy. Thus, Macron finds himself on shaky ground, just not that needed earthquake.

Sadly, a drought offers no help. Takes too long, and Macron needs something more immediate.

Oh what Macron would do for a habib? That’s Arabic for “dust storm”. And how about the irony of a dust storm ending the dust up. But no habib comes to save the day.

Perhaps just a 100 mile an hour straight line wind. That would knock a few protesters on their asses and help remind people of just how power Mother Nature is. And talk about just what the doctor ordered to get people to remember man is the enemy of Earth, not his fellow man.

Right now, I bet Macron would welcome a torrential downpour. Nothing like some natural disasters–caused by man, of course–to remind people of the real problems facing the world.

Back to the military.

As it turns out, Macron isn’t considering using the weather in his response to the rioters. Instead he’s considering the military. Because like Trump won’t bail out the globalists in their lust for American taxpayer money, climate won’t bail out Macron from his very serious problems.

I have no doubt who France would choose between Obama and President Trump. French people have tired of pansies who look good in suits. They now prefer real men, and not the Leftist definition of the metrosexual eunuchs they call “men”.

France could use a real leader right now. 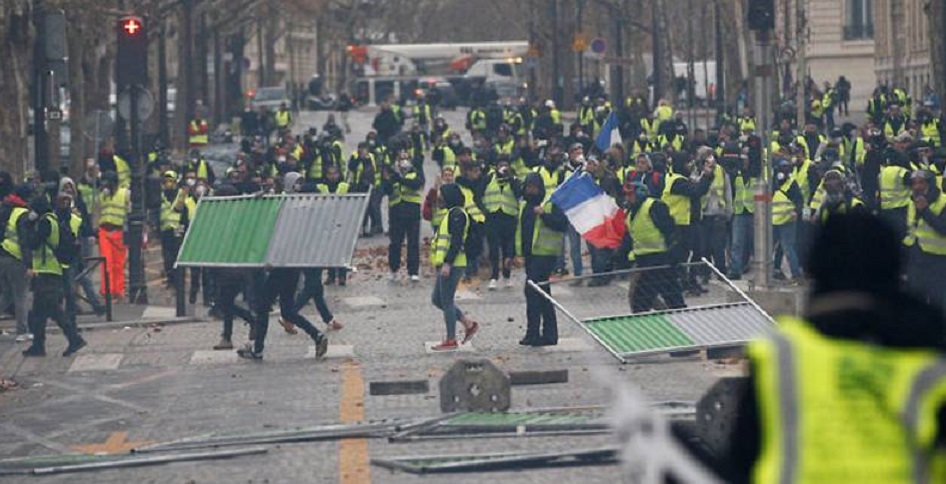 Authorities across France braced Thursday for the possibility of more riots and violence at anti-government protests this weekend, holding emergency meetings and deploying tens of thousands of police and security forces. Museums, theaters and shops in Paris announced they would close Saturday as a precaution — including the city’s famed Eiffel Tower.

Police unions and city authorities met to strategize on how to handle the protests on Saturday, which are being held even though French President Emmanuel Macron surrendered Wednesday night and cancelled a fuel tax hike that had unleashed weeks of unrest.

On the other side of France’s volatile social debate, disparate groups of protesters did the same thing, sharing their weekend plans on social networks and chat groups.

Prime Minister Edouard Philippe told senators Thursday that the government will deploy “exceptional” security measures for the protests in Paris and elsewhere, with additional new forces on top of

Speaking on TF1 television, Philippe said 89,000 police officers will be deployed on Saturday across France — up from 65,000 last weekend.

Sadly for France, things have gotten worse; a lot worse.

Because on top of their citizen problem, they have their immigration problem. Soon these two groups will battle, because this protest is not just about taxes on petrol. This war is about sovereignty.

Somebody must pay the bills. And currently the French people pay for all the “humanitarianism” their leaders can stack on their boney little shoulders. Muslims mock the Europeans for allowing this nonsense to happen.

Certainly all Muslims don’t feel as this man does. But as the saying goes, “In comedy there is truth!”.

The Cost of Socialism

There are the obvious costs of socialism. Most socialist countries are broke. They have far too many people on the public dole. No longer are people willing to take a menial job to get by, when government offers almost as much to sit on one’s ass. Those cost are untenable, but EU countries have kicked the can down the road. So now France finds itself in a precarious position. 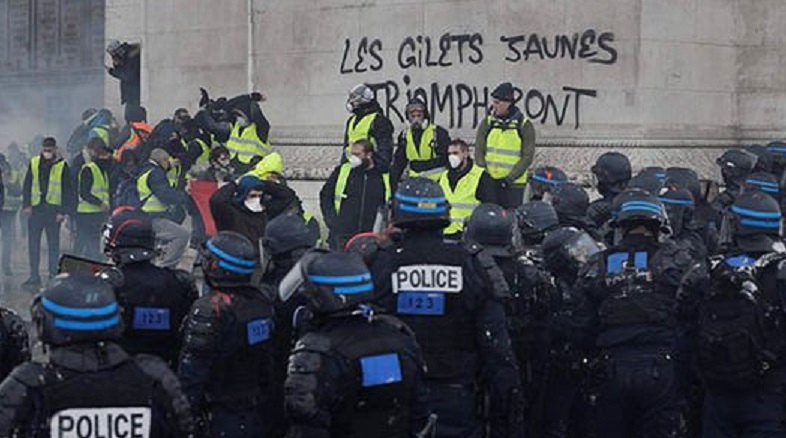 The City of Passion, Paris now closes it iconic monuments as a precaution. The Arc de Triomphe was defaced, and now they deploy tens of thousands of police as a precaution? But only for a day, right?

What is the cost of deploying 89,000 police, many of whom weren’t supposed to work? But that cost is minimal compared to what comes soon. Because socialism comes at a high price.

There will be more riots, because the country has reached a tipping point. France lost its way decades ago, just like most EU countries. The U.S. wasn’t far behind, as the Obama Era ushered in what France experiences now. Barack Obama tried to tip the cauldron, and we got glimpses in Ferguson, MO and Baltimore, MD to name two examples.

But America is far different than France. Because we have something the French never had: the American Spirit. Despite the worst decade in American history, and a president who tried to kill that spirit, Obama ignited it. And now we have Trump.

Protests in Paris: As the French now say, “We want Trump!”

France devotes more than one third of its GDP to providing its citizens with welfare protection, according to new figures. No other country in Europe is as generous.

The new figures from Eurostat will give ammunition to right wing presidential candidate François Fillon, who has vowed to dramatically shred pubic spending if elected next May.

In the year 2014 France spent 34.3 percent of its GDP on welfare, well above the European average of 28.7 percent.

And the French outspend other countries, though many people give up on the system due to the bureaucracy.

She concluded that being poor in France is a full-time job:

After filling away everything, I headed to social services where the claim folder had to be filled out again online by a social worker. Beforehand I had imagined social services waiting rooms to be full of poor mothers with crying babies in their arms. The atmosphere was far less lively. Most clients were shabby oldsters in need who looked ashamed, or lonely retired Parisians or widows forgotten by relatives but also by French social security, which focuses benefits on families. I couldn’t help but notice the employees’ exaggerated kindness. They must have been taught that their clients were too desperate to cope with the usual arrogant French bureaucracy.

The social worker had some difficulties in writing my name. She told me she had never had a Finnish customer before. She carefully verified all the photocopies stating my family’s situation and financial issues and then classified the ‘dossier‘. My first claim was finally made.

I started to realise then that being poor is a full-time job in France.

Frankly, I like knowing there is a thick layer of bureaucracy before somebody can get my hard-earned money.

Far too many able-bodied people clamor to a system long broken. The system was built for the truly needed, not the lazy.

I suspect other EU countries watch the French situation carefully. Because their protests are right around the corner. Moreover, I suspect many world leaders watch the renewed America, led by President Trump.

To paraphrase Dickens, currently France and the United States is indeed a tale of two countries. Going in very different directions.