Donald Trump Jr infuriated the Left with what they hate most: truth.

For Leftists, hatred of the truth is second only to their hatred of the Trumps. So when he targeted newly-elected Congressman Ocasio-Cortez with the truth, she rebelled two-fold.

Trump posted this meme on Instagram, where he explained that Americans enjoy walking their dogs, not eating them. 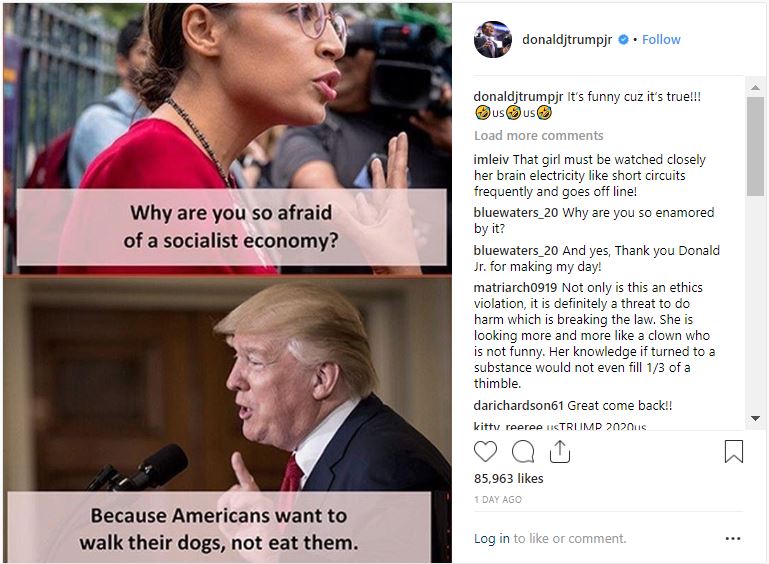 An obvious reference to the situation in Venezuela, a socialist mecca.

In the past, Leftists like Bernie Sanders applauded Venezuela for its socialism. Sanders was joined by Hollyweirdos like Sean Penn who actually visited with dictator Hugo Chavez.

Those accolades didn’t age well. Before I get to Venezuelans eating their dogs and Ocasio-Cortez, check out who we found actually fare well in Venezuela.

American taxpayers should learn from Venezuelan prostitutes. Not only do these ladies represent what the American taxpayer really is, they have also shown us the future.

It is illegal to trade dollars in the streets of Venezuela, so those who have them are able to make a killing in the underground market, where dollars are worth 11 times the official rate.

That, of course, has produced unintended results and consequences for society. One of those, Bloomberg’s Anatoly Kurmanaev reports, is that prostitutes and other people with access to dollars are doubling as currency traders.

Prostitutes get their greenbacks from sailors carrying them into the country.

I don’t know what you currently do to provide money to the pimp known as the Federal government, but whatever it is, you may soon find yourself part of this underground Black Market, as the dollar ends up in the toilet.

Venezuela would make Michelle Obama proud, however. We wrote of the average weight loss of Venezuelans.

So why not combine the two, and try the Venezuelan Socialism Diet.

Along with your loss of liberty and justice for all, it comes with no food.

The failed socialist revolution state under Venezuelan president Nicolás Maduro has resulted in economic and humanitarian crisis. Things became so desperate in the socialist country that Venezuelans slaughter their pets to survive. By pets, I mean personal and zoo animals.

In short, no furry creature is safe in the country these days.

According to the new data compiled by NGO Human Rights Watch on Tuesday, malnutrition continues to rise aggressively in Venezuela under socialist leadership. The study estimates that 80 percent of Venezuelan households access enough food to live.

Despite the evidence of happenings in Venezuela, Ocasio-Cortez ignored it. However she took time to respond back to Trump, threatening him.

I have noticed that Junior here has a habit of posting nonsense about me whenever the Mueller investigation heats up.

Please, keep it coming Jr – it’s definitely a “very, very large brain” idea to troll a member of a body that will have subpoena power in a month.

I tweeted this to Ocasio-Cortez about her blatant threat!

Not that WaPo said that Trump Jr “trolled” Cortez. Apparently using her words, then pointing out facts about socialism is trolling her? 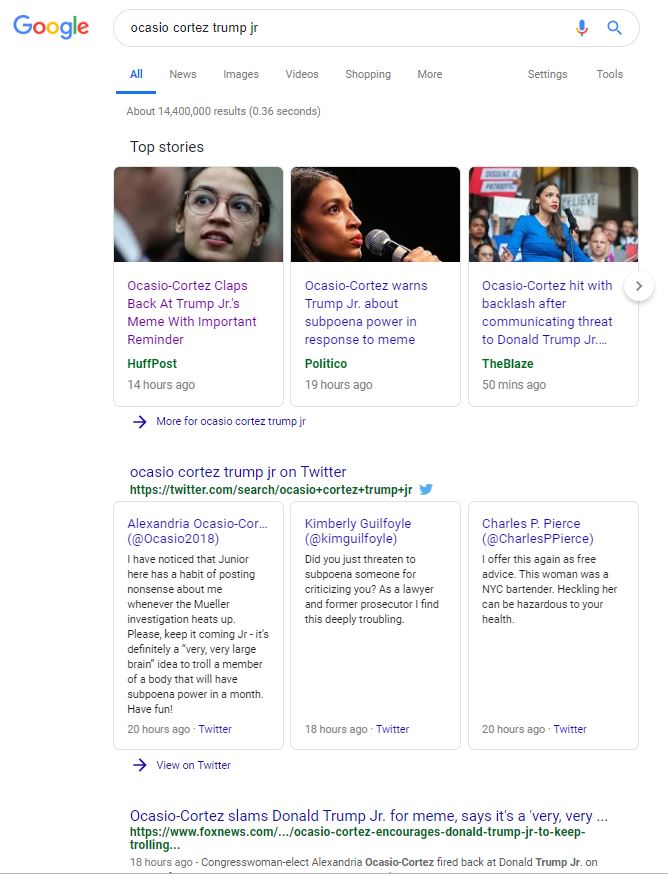 Next is a continuation of the Google search.

You can see the media attempt to mitigate Ocasio-Cortez’ threat. They use terms like “warns” and “fires back”. All attempts to provide bona fide to Ocasio-Cortez. It won’t work.

But what Ocasio-Cortez did was clearly a threat. 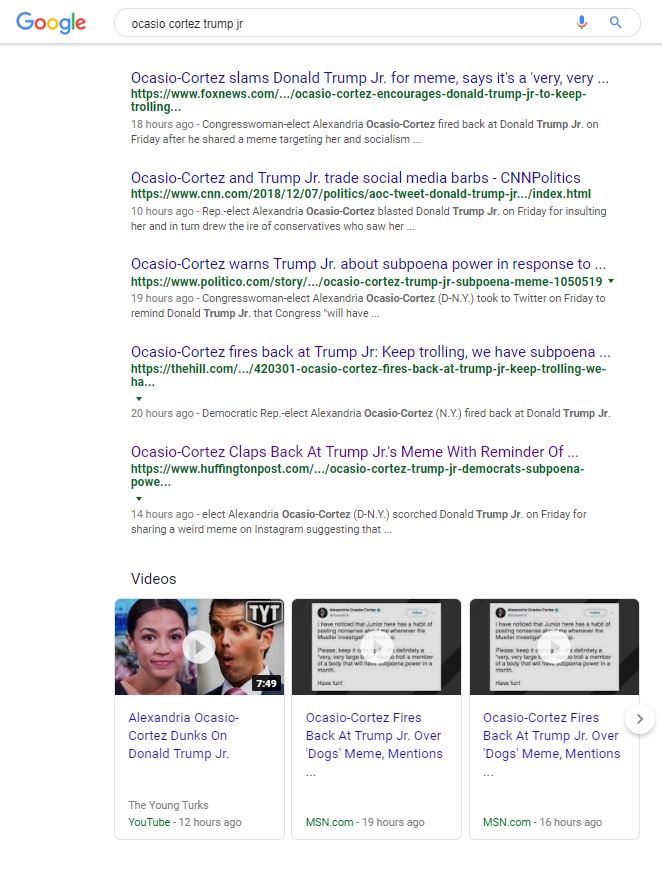 I’m certain somebody on her staff or some prominent Democrat(s), likely attorneys counseled her on her statement. Her tweet reads like somebody else did the research. Frankly, Ocasio-Cortez isn’t smart enough to attempt this backtrack.

Nevertheless, that didn’t stop her from trying. 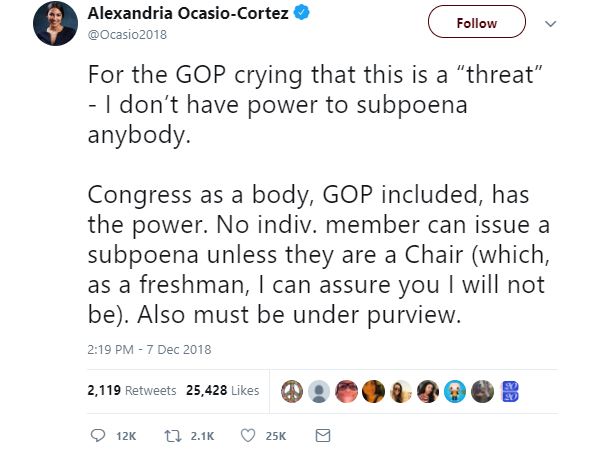 I tweeted this on the backtrack.

Ocasio-Cortez hasn’t served a DAY in office in her official capacity, and she’s already drunk with power.

And in fact what she did was a violation of ethics as The Federalist explains:

Now, in a perfect world, we’d be holding debates about the merits of state-controlled economies versus markets via more dignified forums and mediums, but that’s not how things go in 2018. Not only is this all absurdly juvenile, but Ocasio-Cortez should be aware that, per page 150 of the House Ethics Manual, “Members…are not to take or withhold any official action on the basis of the campaign contributions or support of the involved individuals, or their partisan affiliation. Members and staff are likewise prohibited from threatening punitive action on the basis of such considerations.”

Don’t think this will be last time Ocasio-Cortez pulls a stunt like this. She believes herself to be the female Spartacus.

Democrats see their violations as “for the greater good”. Let’s hope Congress and the judiciary start enforcing the rules, so both threats and grandstanding cease.