Leftist cries of gun control are nothing new, but Beto O’Rourke just promised to go around and use force to remove guns from their rightful owners if he’s elected president.

Frankly, I’m not sure why Beto believes he’s still in the race. At last glance, he was polling around 5%. Hillary’s 46% couldn’t beat Trump, so Beto’s already toast. But just for grins, let’s pretend he has a chance of getting to the primary.

O’Rourke needs a gimmick, and grabbing guns just might be the ticket. At least that’s what Beto believes.

Recently, Beto used the shooting in El Paso to garner media attention. At least twenty people died, and 26 more were injured. But before first responders could triage the scene, Beto starting screaming “gun control” like all leftists do.

Of course, we know this is flawed thinking all the way around. First, guns don’t kill people. People kill people. So if you take away the guns, there are still knives, billy clubs, baseball bats, bombs, and according to the FBI, even feet. That’s quite a few weapons readily available without a license or a background check.

Don’t get me wrong, I believe in gun licenses and background checks. But I don’t believe removing all the guns will magically put a stop to homicides. In fact, even mass shootings would still happen- just with a different weapon, such as a car bomb or an airplane crashing into a building on purpose. We’ve seen it happen before. Guns aren’t the only way tragedies unfold.

Second, criminals don’t care about obeying laws. My grandpa used to tell me a lock is good for one thing. It will keep an honest man out. A criminal will bust the lock every time. In other words, you can outlaw guns, and the only guys who would show up to turn them in are the law-abiding citizens who weren’t going to shoot anyone anyway.

Third, violence will actually increase under stricter gun control. Criminals won’t worry about a homeowner shooting them in the middle of the night, so they’ll go ahead and take what they want. Your new TV, your sweet ride, or maybe one of your kids. This is the very reason the constitution granted us the right to bare arms. But apparently, Beto hasn’t read it all the way through.

The same liberals who sat silent after mass shootings under Clinton and Obama now want to blame President Trump for the crazed delusions of a mass shooter. You know what they say, another day, another leftist hypocrisy. This time, Beto went for the juggler with his claims that Trump is responsible.

“He is a racist, and he stokes racism in this country . . . We have a president with white nationalist views in the United States today,” the failing Democratic presidential candidate told CNN all Saturday night and Sunday.

He likened Trump’s “anti-immigrant rhetoric” to something out of the Third Reich. “He is an open, avowed racist and is encouraging more racism in this country and this is incredibly dangerous . . .

“Let’s connect the dots here on . . . who is responsible for this right now.”

CNN’s Jake Tapper cut to the chase: “Do you think President Trump is a white nationalist?”

What disgusting opportunism from a man whose first recorded reaction to the news of Saturday’s massacre in his hometown was a weird smile, quickly suppressed, a man so lacking in empathy, he once wrote of his teenage fantasy of plowing his car into two children crossing the road.

But when it comes to publicity for his ridiculous presidential bid, he’s never had it so good. CNN can’t get enough of him.

It doesn’t get uglier than scoring political points on the deaths of 20 people.

Using a mass shooting to get attention is a low blow, even for O’Rourke.

Now, Beto takes it to the next level.

I’m pretty shocked to hear Beto say he’s going to walk in and take people’s guns by force. This guy is from Texas. In Texas, you don’t mess with a man’s BBQ, his football, or his gun!

In fact, I thought the headline might even be #FakeNews. But sure enough, Beto said it.

According to the Gateway Pundit:

On Saturday, a reporter asked Beto in Charlottesville how he’d reassure people afraid the government would take their assault weapons away.

“I want to be really clear that that’s exactly what we are going to do,” he said.

But you know what they say in Texas? 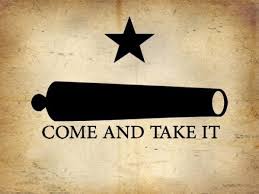