While a crowd gathered at a Bernie Sanders rally, AOC took the stage to degrade America again.

This time, she said we haven’t formed an advanced society. Instead, we live in a nation of fascism.

Honestly, I’m surprised she knows such a big word. But liberals drank it up like free liquor on New Year’s Eve.

.@AOC on Bernie’s rally in LA yesterday: “It is fascism what we have” in the United States, “what we’re evolving into.” pic.twitter.com/M6pjhneTxm

In fact, AOC blamed Donald Trump for our “new status” as a fascist nation.

“They say the United States is the richest country in modern history… For who? The richest country, who cares about how much gold is being amassed if we can’t realize an advanced society with those resources?” Ocasio-Cortez asked the crowd.

“What we’re living in right now is not an advanced society. It is fascism what we’re evolving into as well,” she added.

And she wasn’t smart enough to stop there.

Ocasio-Cortez, 30, had been quoting the speaker before her, Harvard Divinity School professor and left-wing activist Cornel West, who once said, “Justice is what love looks like in public.”

Ocasio-Cortez, who came to Congress in January after beating a member of the House Democratic leadership in a primary, riffed on West’s theory.

“Establishing a loving society in the United States of America” is not “an irrational, overly feeling, sympathetic statement,” she said. Rather, it’s the pursuit of “an advanced society.” And an advanced society, Ocasio-Cortez said, guarantees healthcare and tuition-free college and trade schools, among other benefits.

“What we are living in now is not an advanced society,” she said.

Ocasio-Cortez, who also ripped the increased military budget just enacted Congress and President Trump, called California the “heart of where we’re going to change this country.” The “Super Tuesday” state, which goes to the polls on March 3, is a prized pick-up for all the candidates vying for the 2020 Democratic presidential nomination. She urged Sanders supporters in the crowd to wear out their shoes and “paper the streets” to boost the Vermont senator and White House hopeful’s “revolution.”

“This is about a movement that has been decades in the making,” she said. “We can’t go back to the way things were before, because the way thing were before is how we got to where we are now. We cannot go back to a world where the rich are put first and working people are put last in Washington day in and day out.”

A Bernie Sanders rally is definitely the right place for a message like that. Anywhere else, those with common sense would’ve booed AOC off the stage in five seconds flat. But to be honest, I didn’t realize Bernie still thinks he’s a contender. He’d make better use of his time writing out his funeral wishes at this point.

Luckily, not everyone buys whatever AOC is selling. 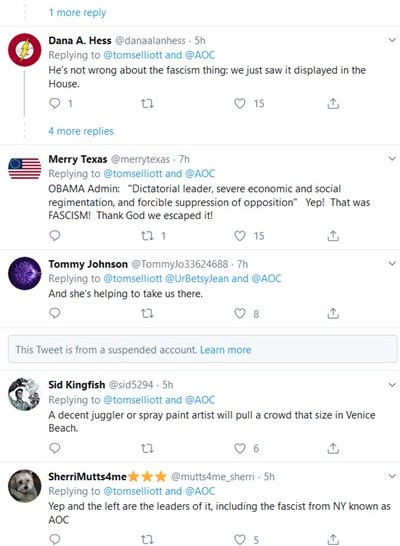 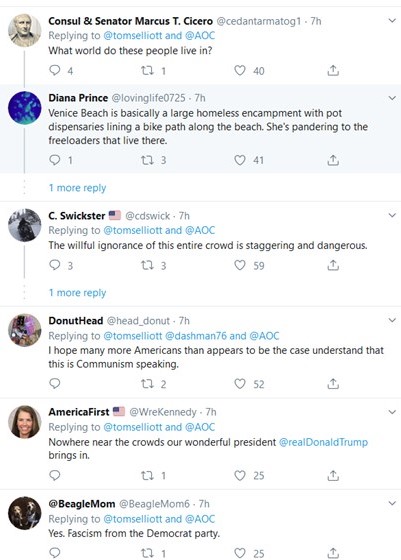 It looks like Twitter feels a little differently than the Venice Beach crowd. Ironically, some mainstream media sites boasted that Sanders pulled in 10,000 people. I’m sure that’s a huge crowd by democrat standards. However, Trump’s Florida rally had more than 22,000 people inside the building, and thousands outside as well. Actually, he’s yet to leave an empty seat in the house.

AOC is a lot like impeachment if you think about it. They’re both a ball of lies. They both wish they could get Trump out of office. And they both do nothing but energize the president and his loyal followers to just keep going. Next stop, Election Day 2020.

Right Report
A Hit From This 12 Gauge Shotgun Slug Will Make A Real Mess Out OF A Human Being: The ‘Black Scarab’ (A Supersonic Freight Train)
Great American Outdoors
WATCH: Bill Maher Just Asked Some FORBIDDEN Questions About The Alphabet Lobby
Clash Daily

SOURCES: China preparing for “D-Day” INVASION of the continental United States, with forces to land on the beaches of California, as Biden and Newsom serve as China’s accomplices
DC Clothesline