Not long ago Fox News jettisoned Leftist Shepard Smith from the company. Most Conservative Americans wondered, “What took so long?””

Surprisingly, Smith was not the first fake news journalist that Trump trumped. Recall a while back when CNN fired a group of clowns who reported that Congress was investigating a “Russian investment fund with ties to Trump officials”. The story cited a single anonymous source.

I love how CNN covered the ultimate retraction. Essentially they claim to have conducted an internal investigation by CNN management. In their “investigation” they found that some standard editorial processes were not followed when the article was published.

No investigation needed. Almost all the reporting by CNN on President Trump or his satellites involves “anonymous” sources.

Thomas Frank wrote the story in question. Eric Lichtblau edited the story. Finally, Lex Haris who oversaw the unit ran with the story.

“In the aftermath of the retraction of a story published on CNN.com, CNN has accepted the resignations of the employees involved in the story’s publication.”

So we had the CNN staffers, Shepard Smith, and now another Leftist “journalist” bites the dust.

Why did Jessica Kwong get fired?

Newsweek reporter Jessica Kwong prepared a Thanksgiving story a week early. She had President Trump golfing, when in fact he flew to Afghanistan to meet with the troops stationed there. 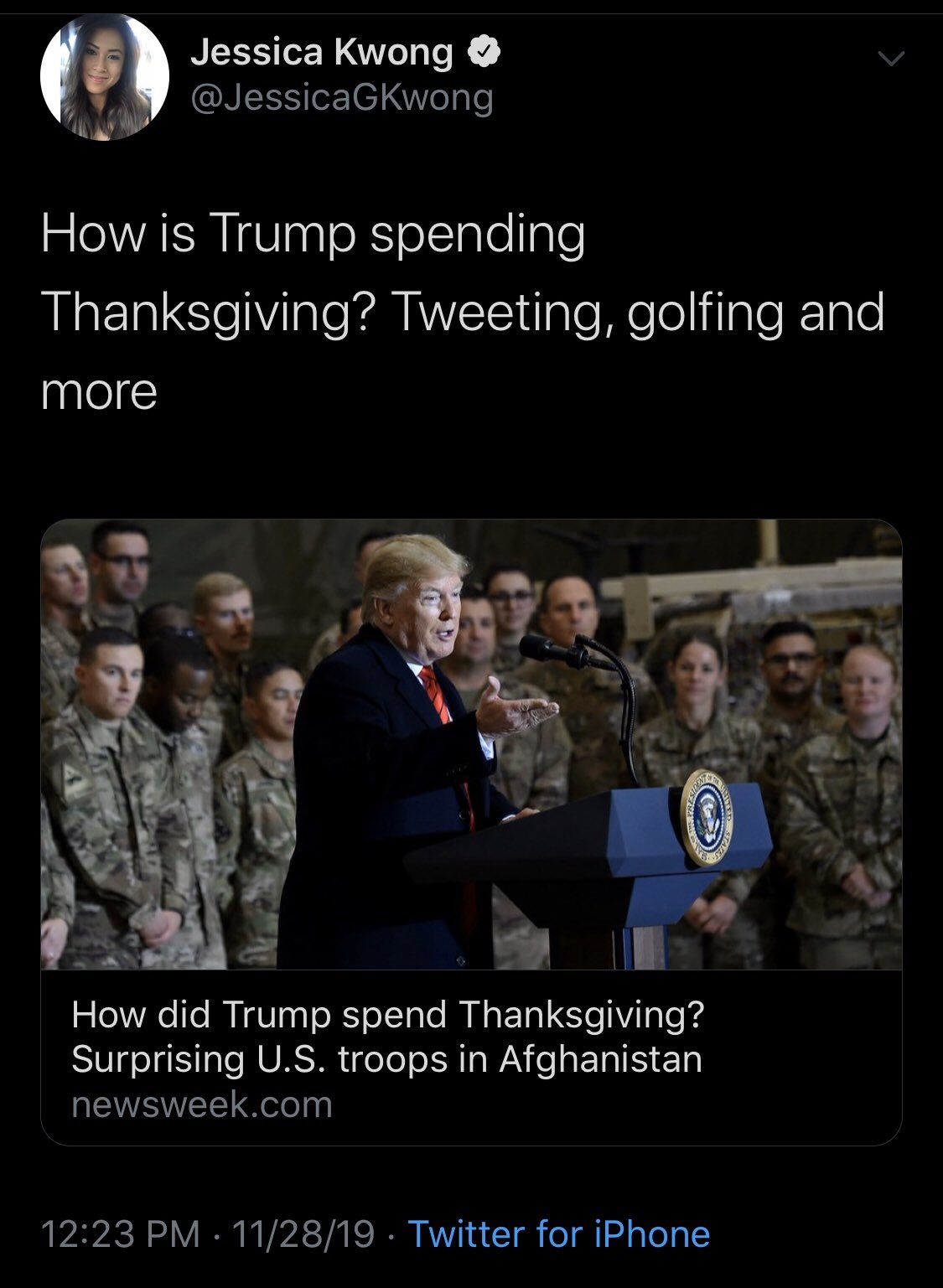 Shortly thereafter Newsweek fired her. Newsweek used a similar decision to that of CNN to oust Kwong.

According to Newsweek, the decision to let Kwong go was made after an investigation into “the failures that led to the publication of the inaccurate report that President Trump spent Thanksgiving tweeting and golfing rather than visiting troops in Afghanistan.”

“The story has been corrected, and the journalist responsible has been terminated. We will continue to review our processes and, if required, take further action,” said Newsweek’s spokesperson.

Kwong was supposedly told by her boss to write her story a week ahead of Thanksgiving. While she could have prepared multiple stories for various eventualities for the president over the holidays, she wrote only one. And the editor and unit boss accepted the story. Kwong had a “cya” of sorts, but she was still fired. Yet nobody else was.

Be still my heart if NBC suddenly raised its journalistic standards. Could that really be the case? Of course not.

I don’t remember the exact first time Donald Trump used the term “fake news”. But I do remember asking myself if the term might stick. I questioned this because typically Republicans don’t do a good job with the lexicon. Trump showed success with nicknames, but mainstream terminology hadn’t been tested. Nevertheless, three years later, and “fake news” is embedded in the lexicon. Hard to believe given that the mainstream media pushed back, big time. Despite their whining like toddlers, the media figured out they couldn’t beat Trump on the term fake news. So, they tried a new tactic.

What is Fake News? We will tell you!

As monopolies and autocracies increasingly dominate not just what information is shared but how it is shared, it is ever more crucial that democracies assert principles to guarantee citizens the right to freedom of opinion, based on reliable and pluralistically sourced information, without algorithmic, political, or religious bias.

In October, Mark Zuckerberg used freedom of expression as an argument to contrast Facebook’s values with China’s vision, calling for regulations that won’t undermine free speech and human rights. The problem is that he defends a system where there is a direct and unfair competition between different types of content, propaganda, advertising, rumors, and verified facts. The “Zuckerberg doctrine” does not take into account the necessity to promote pluralism and trustworthiness of news and information through appropriate mechanisms to guarantee freedom of opinion.

Democratic debate requires verification and editorial independence. Facebook, Twitter, and Google—companies with more power than most countries when it comes to the dissemination of information—need to reassess the systems they have put in place. Therefore their participation is essential.

Zuckerberg recently went on record, saying “people should be able to see for themselves what politicians are saying” and “judge for themselves the character” of said politicians. That’s exactly what Kwong and her many colleagues fail to do. They’re so busy writing their own narrative, they don’t tell the real truth. Now it’s starting to backfire, as Trump wins.

Expect more “journalists” to be a bit more circumspect when publishing.