Trump rattles the Left. And for many reasons. That’s why they hate him.

First, he speaks the unadulterated truth. And Leftists live lies, ergo they hate dealing with truth. Trump’s frankness mystifies them.

How dare he call out Mexicans for trespassing in America?! Call some of them drug dealers and human traffickers. Trump can’t be allowed to speak the truth about what’s happening. Then threaten to BUILD A WALL AND HAVE MEXICO PAY FOR IT!

Actually, you don’t need to go back to President Trump’s 2016 campaign, because Leftists still claim the man is unhinged. 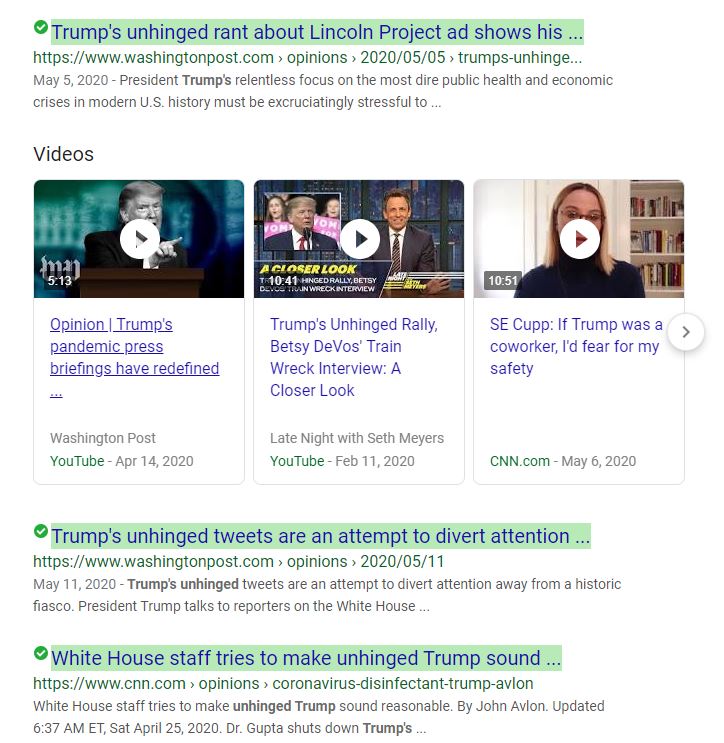 WaPo has two articles at the top of a Google search on the subject of Trump “unhinged”.

These are the same people who, despite Mexico’s former $70 billion trade deficit and the billions that illegals send back to the country, declared that Trump had no leverage.

Outcome: the border wall is being built. Next, the USMCA trade agreement that includes Mexico more than pays for the wall. Finally, illegal immigration drips compared to Obama-era numbers.

In short, the truth hurts Leftists. But Trump has another trick that Limbaugh pointed out.

He commented recently on his radio show:

“When you get to Trump and his conspiracy theories he does it in a really clever way.

And this is where people don’t get the subtly of Trump because they don’t think he has the ability to subtle.

Trump never says that he believes these conspiracy theories that he touts.

He simply passes them on.

Like during the campaign of 2016. Folks, I ran the gamut of emotions on this.

When Trump said he had seen a picture of Ted Cruz’s dad standing next to, next to Lee Harvey Oswald.

I said ‘what the hell is this?’ And I thought he’s going to have to walk this ficticious thing back.

Ted Cruz’s dad had something to do with the assassination of JFK? He is going to have to walk this back.

He never walked it back but more importantly he never asserted it himself. He simply said it was out there and people ought to know.

And with virtually every conspiracy theory Trump touts he never actually touts them himself.

Great observation by Limbaugh. Leftists can never officially say that Trump believes the conspiracy theories. Those who do become lying skanks.

Do you think Trump cares whether [Joe] Scarborough murdered anybody or not? No of course he doesn’t care.

So why’s he tweeting it?

Well because it’s out there. He didn’t make it up.

It’s long been out there that this death had something suspicious about it. So Trump is just throwing gasoline on a fire here.

He’s having fun watching the flames.

And he’s having fun watching these holier than thou leftist journalists react like their moral sensibilities have been forever rocked and can never recover.”

Trump’s tactic has the added benefit of reaching the lowest level voter. No highbrow discussions, a la Romney. Trump fights in the gutter wearing a tux. When the fight is over, Trump emerges clean.