I recently went on a trip to Colorado. While I found the face masks annoying, it was still beautiful. Between enjoying the mountains, wildlife, and old houses, I was willing to endure the pesky masks. 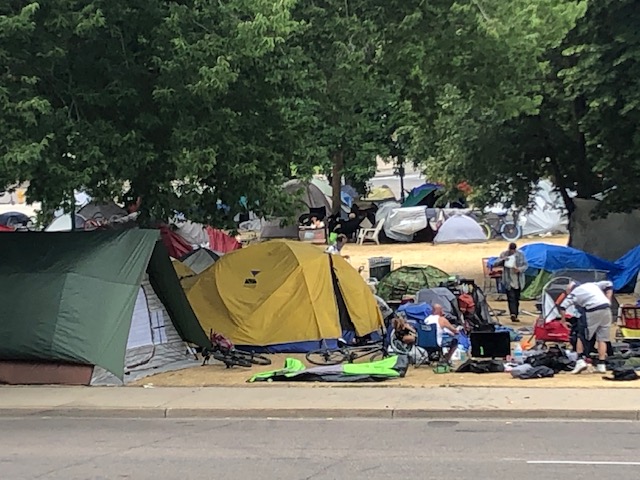 I was supposed to go to Denver at the end of my trip. It’s a very cool city, and I wanted to take my kids to some of the amazing places. I planned to show them the Smithsonian. Then, I wanted to check out the mint. Unfortunately, most of these attractions were in close proximity to the capitol. And the capitol morphed into an Antifa/BLM zone. There were a bunch of these terrorists camping on the capitol lawn. They’d already destroyed a lot of property. Further, they turned aggressive. Then, to make matters worse, something happened close to me.

The night before I planned to head to Denver, I was at a relative’s house. Some thugs were protesting outside a Law Enforcement Officer’s (LEO) house over a justified shooting. Said shooting happened exactly a year ago. The LEO was cleared of wrongdoing, but that doesn’t seem to matter to these punks. They’d rather twist the truth, chant and yell, create a scene, and antagonize people just driving through.

Sadly, a man with no ties to the chaos was driving through the neighborhood to get home. Protesters wasted no time attacking his truck. Some were actually carrying AK-47s. The police only told the protesters to let the man through. (Sidenote: A St. Louis couple was recently arrested for pointing guns at protesters on their own property. But these protestors are fine to wave around AK-47’s. How do leftists not see the flaming hypocrisy?)

In fact, the police were happy to make commands from loudspeakers. Far away. I’m sure threats of defunding the police play a huge role in their response. I guess the “shelter in place” order was an example of the new “peaceful policing” liberals are demanding.

Predictably, the protesters refused to adhere to the police suggestions and went back to hitting the man’s truck. It wasn’t until the truck owner produced his weapon that the thugs backed off. The video seems to be gone of the actual brandishing of the firearm, but there’s still some of the attack. (Caution, adult language.)

CSPD again telling protestors to continue moving. This truck on the right tried to drive through but was stopped. pic.twitter.com/3rbvXsy2oc

Undoubtedly, these protests will continue to pop up all over the state. And as police departments face cuts in funding, responding to the leftist’s reign of terror will fall to the bottom of the priority list.

Right before I left, there were some other instances in Denver as well. Honestly, I did have a firearm. Because I tried to be prepared, but the simple facts are these:

So that’s what I did. I came home instead of going to Denver, I just went home. I’m disappointed, and I know there’s a possibility that nothing would have happened, but the chance that my family could be hurt at all was just too great, and simply not worth it.

But here’s my problem. I SHOULDN’T HAVE TO WORRY ABOUT THIS. This isn’t Israel. This isn’t even Mexico. This is the United States of America, and I shouldn’t have to be worried about my family’s safety because I went on a vacation to Colorado Springs! My biggest fear should be crossing paths with some Elk or mountain sheep.

And here’s Colorado’s problem. Their economy is driven by tourism. In fact, Colorado travelers spent $22.3 billion, generating $1.37 billion in local and state revenues, reducing the tax burden for every Colorado household by $659. And let’s not discount the jobs tourism creates. In Colorado, visitors fuel the state’s second largest employer, directly supporting 174,400 jobs.

I know I’m only one dad, but I can’t be the only dad that took my family out of the line of fire. The economy is already suffering from this WuFlu pandemic. Wiping out tourism will destroy the remaining shambles.

Yet the big question still remains. What happened to us? This country is in the middle of a full on assault. And for the most part, it seems that our leaders are either simply tolerating the rioters’ actions or worse, cheering the thugs on. Either way, it seems the back bone of America disintegrated under leftism.