Always the showman, Donald Trump monitored the freak show put on by the Democrats. And now we got hints of what was to come, as Trump plans his second “Coming In” party. The event presented many possible explosions for Democrats.

As I’ve said on interviews and my own radio show, what a monumental backfire the Democrat convention was on their already limited prospects to regain the White House. Moreover, what ironies and hypocrisies they presented at their laughable event.

Take for example this graphic of Elizabeth Warren. It contains a subliminal message of divisiveness and racism. Do you see it?

Look to the right, and you will see the letters: BLM.

Clearly an homage to the racist domestic terror group of the same initials. Initials PLACED there intentionally.

As it there weren’t enough irony to have Warren address the Native American caucus?

Still more irony. Recall when Warren ran in the primary, and filmed her beer drinking. Upon examination of the video, people noticed that it featured a family heirloom. That heirloom provided a hat-tip to the racism of Democrats as the graphic below suggests.

I wonder if we look hard enough at the other graphic might we will find this watermelon-eating Sambo as well?

The symbolism of these graphics speaks loudly. Democrats sneak in their messages of racism and divisiveness, then pretend they were aware of who they are.

Still, Warren represented only one of many hypocrisies and ironies of the Democratic convention. Like former President Bill Clinton lecturing the nation on the propriety of the office of president?

Seriously? Clearly nobody checked his speech in advance and recommended he remove that part.

The DNC rolled out loser after whiny loser, most making the case for more Trump and no Biden. Obama’s speech resonated most with me, as he explained his own presidency in his accusations against Trump.

As I’ve written, Democrats got no post-convention bounce. No surprise there. Then I read that former Senator Joe Lieberman decided post-Democratic convention that the Democrats are the Party of Biden. I agree. Democrats are old, demented, feeble, white elitist racists. Congratulations to the Democrats for circling back on their history and the origins of their party.

Trump on the other hand at 70-something is a fresh start for the Republican Party. He’s youthful, energetic, upbeat, and let’s not forget the trophy wife. And his convention was anything but conventional.

Unlike the Democratic convention, the RNC convention offered pageantry. Team Trump learned from the sh*t show of the Democrats, and the Republicans knocked it out of the park.

Clearly in the battle of the conventions, Trump Team 1, Biden Team 0.

But it could have been far worse for the Democrats, and here’s why:

I heard that Tara Reade was invited. I’m sure she would have been happy to discuss Joey “Fingers” Biden and what he did to her. And while Reade’s presence would have addressed one aspect of the #MeToo movement and how Democrats really don’t care about women, this next move could have been even more bold.

In a blow to Kamala Harris, Trump could have invited Blanche Brown. The thought of allowing Blanche to speak makes me go “Chris Matthews Obama-loving tingly”. Below is a graphic produced by somebody offering the idea of what Blanche might say: 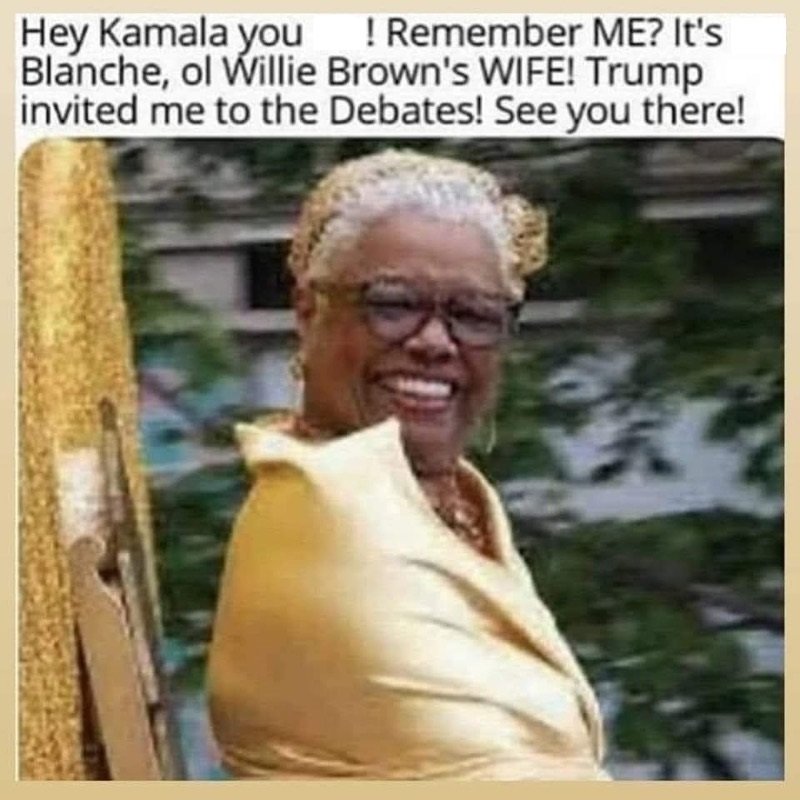 Can you imagine the people Trump could have brought to put the spotlight on the Democrats? People like Peter Strzok’s wife?

Imagine all the women raped by illegals, or the family of murder victims of illegals? Or the black family members of those killed by black on black crime. Next, what of those who suffered from violence by Antifa?

Let’s not forget the people who lost businesses during the Wuflu plandemic, and doctors who can speak of this orchestrated charade?

Trump took the high road. He brought people who bring America together. Because that’s the message America needed to hear.