Some days just make you proud to be an American. Especially when a hot bed of liberalism rears its conservative head.

Recently, I drove to Austin, Texas to run some errands with my mom. It’s not my favorite city. Sure, the music is awesome. But the leftism will give you a headache as soon as you cross the city line.

But Saturday, I saw something I never expected to see. A line of Trump supporters parading their spirit. 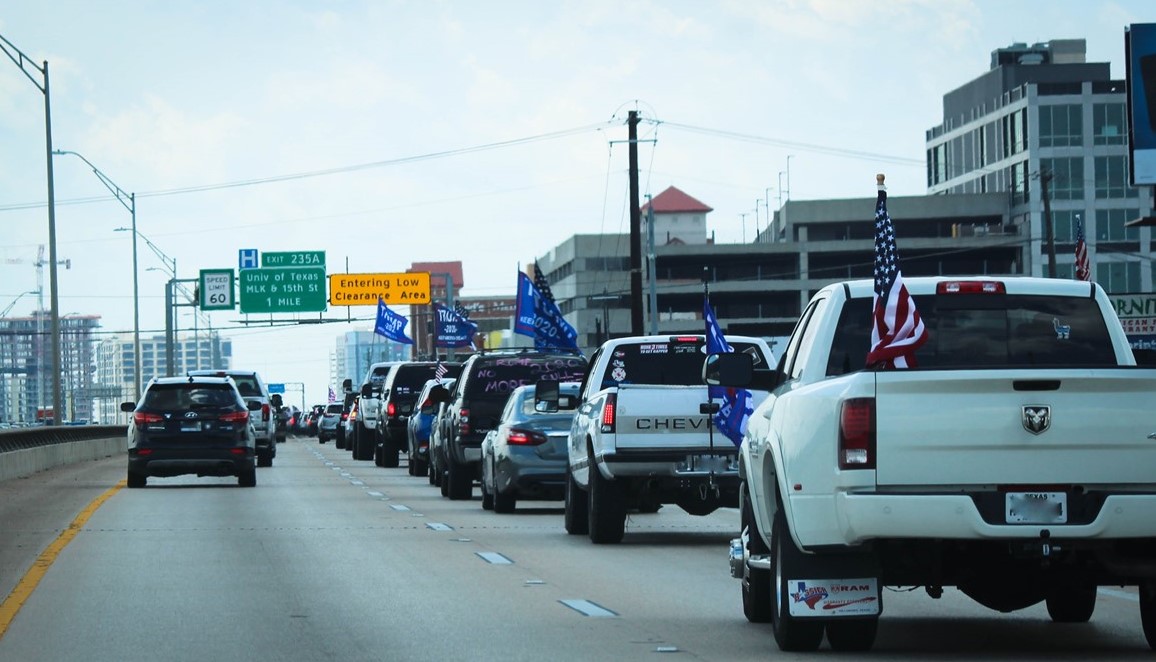 Let me further paint a picture. These were people of all different demographics. There were brand new trucks and decades-old SUV’s. Clearly I was among both the wealthy and the strugglers. There were white, black, and Hispanic participants. And both the old and the young were in the line.

All we could see were the Trump flags flying and the American pride painted on every car. I don’t know where they came from, but immediately I recognized that I was among my people.

Places to go and people to see.

Honestly, I should have only been behind this amazing parade for a few exits. But sometimes, you just go where the spirit moves you. 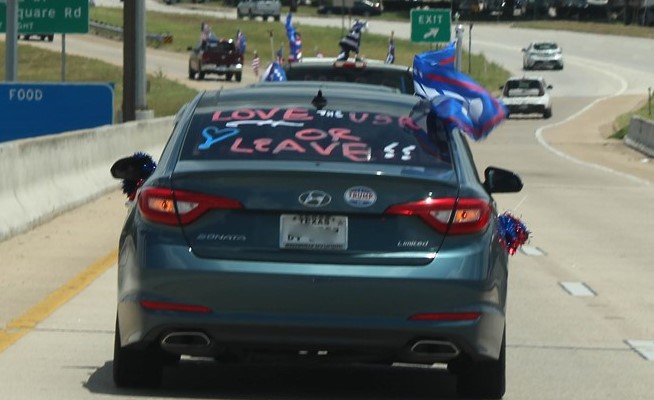 I instructed my mom to search Facebook for some kind of Trumpers of Austin group. She quickly found the meaning behind this gathering.

Supporters of Donald Trump from across Texas formed a caravan on Austin’s highways on Saturday in a show of support for the president.

Starting at noon, participants in the MAGA Drag the Interstate event drove a loop around I-35, US 183, Mopac and SH 71.

Organizers of the event claimed that people from Houston, Dallas and San Antonio drove to Austin to take part in the parade.

Sounds like a friendly show of support if you ask me. But make no mistake, liberals were ruffled by the idea. 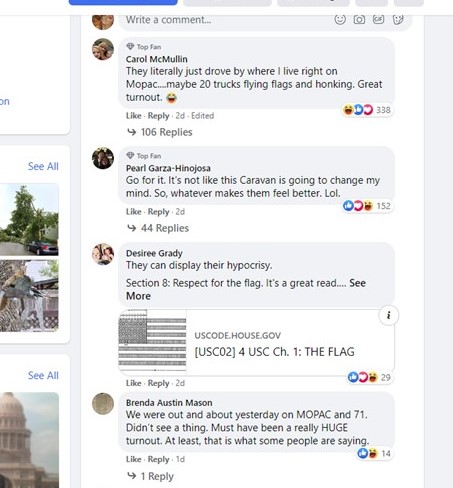 I personally saw way more than twenty vehicles, but we all know people try to minimize Trump turnouts. However, notice that some liberals seem offended by the treatment of the American flag!

Don’t liberals support burning the flag? They’ll stomp it and rip it to shreds. Without a second thought. 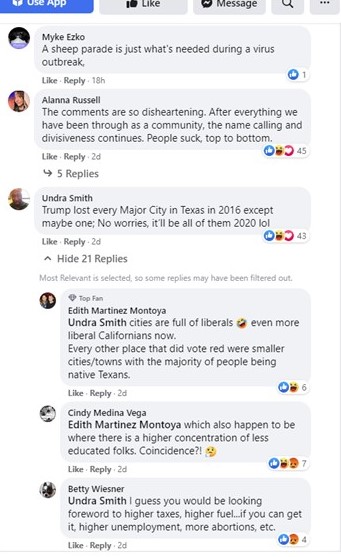 These people are trying to console themselves with claims that Trump is losing in the big cities. But I’m not sure the big city vote is what put Trump in the White House to begin with. 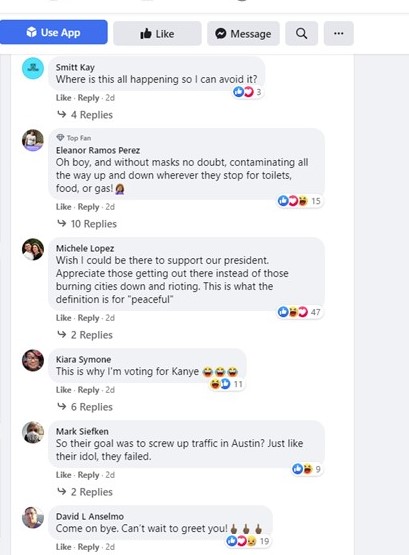 Without masks? Is she kidding? These Trumpers were staying in their own vehicles. Why would they need masks? Talk about mindless followers.

Then there’s the guy wondering if Austin traffic was hit hard. Of course, that doesn’t even jive with the low turnout leftists claimed.

But that does bring me to the most interesting part of my day. I personally watched people honk and cheer at this parade. Then, I witnessed one woman stand up and take a video. (I assure you traffic was slowed at the moment, thus no dangerous move was made.)

I saw more love and support for Donald Trump than I could’ve predicted. At least in Austin. I’ll be honest. The sea of flags was far deeper during my recent visit to Port Bolivar. But the spirit was exactly the same.

But the day couldn’t pass by without triggering a few liberals.

Like this guy. He couldn’t wait to make his feelings known. 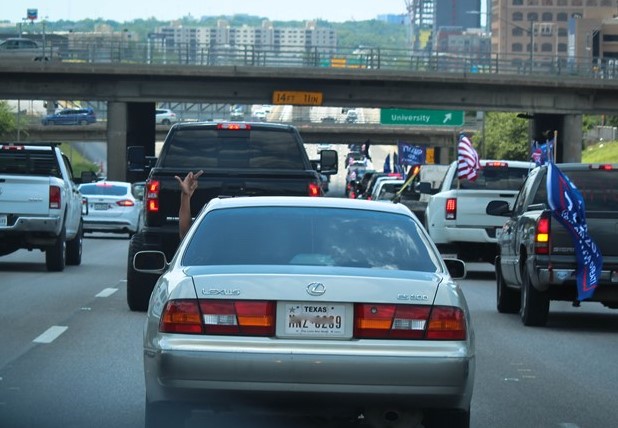 And he wasn’t resigned to just shoot the finger and move on with his day. Instead, he decided to stick around and see if he could put a few lives in danger. Just look at the way he let’s his emotions get the best of him!

Notice none of the Trumpers decided to engage with this moron. Although, I’m fairly certain a few of those country boys in big trucks could’ve easily run him over. Instead, conservatives acted with class. They sent a message. But they refused to resort to vandalism, violence, or outright stupidity. They weren’t littering, looting, or threatening the opposition. Heck, these Trumpers were even social distancing, a practice conservatives know to be unnecessary, which is quite ironic considering what happened next.

Once I made my trek back home, I turned on the evening news. Exactly what did I see? Austin protesters completely out of hand!

Austin police officers have arrived on horses at 4th and Congress pic.twitter.com/E2MkYqqxJl

The Austin protests ended with a great deal of police intervention. To quote the mainstream media, “police and protesters clashed.” Several arrests were made. And I can’t help but notice, when you put them side to side, the Trump parade was peaceful from start to finish. Even the loony liberal was unable to spark a violent response.

Further, even though conservatives see the fallacy of these mask mandates, they still organized an event that followed current protocol. Meanwhile, liberals were busy on Facebook speculating that such an event would spark more cases of covid-19.

I wonder where those same leftists were when news of the protests hit social media? Or is it uncool to point out when your own party is completely bananas?