Facebook should be dismantled. No longer is this a social media platform, but a bona fide operative of the Democratic Party.

They and the other social media platforms should face the same rules as any other company, particularly in their persecution of Conservatives.

If you think the IRS targeted Conservatives under Lois Lerner and the Obama administration, understand that Facebook is FAR worse.

Look at the stats from my page. 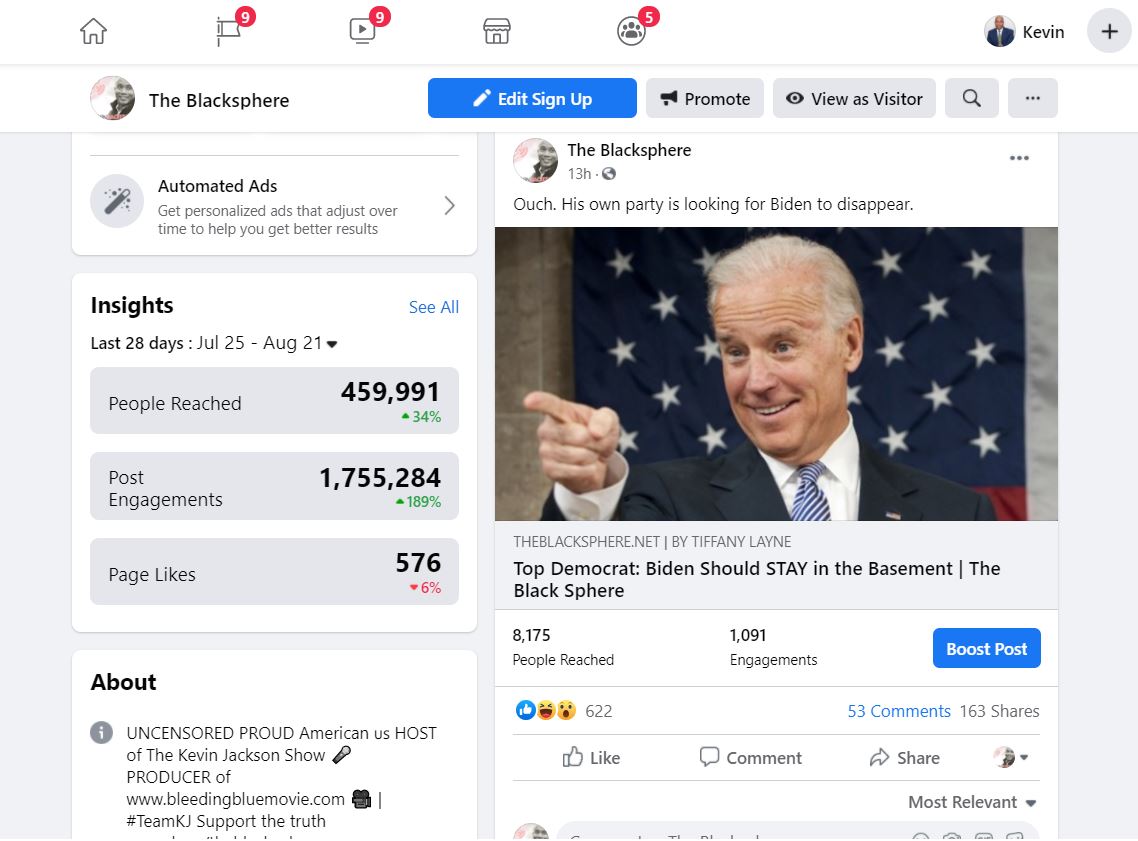 How is that possible, unless I’m being shadow-banned or trolled.

My page numbers are up, because my team worked extremely hard that week to see if we could move the needle. If you visit my page and look at comments, there are few trolls. People love the work of my team, and support what we do.

That’s why we tried our experiment, to prove that Facebook targets Conservatives.

A bit of history:

5 years ago our page grew by roughly 4,000 per day. I could go to the bathroom, and return to 100 new followers. Because the work we produce is relevant and clever. No begging for clicks, because our messages resonated, then and now.

However, to put this in perspective The Black Sphere page has grown less than 1,000 new followers in over 5 years! At the rate of growth 5 years ago, my site should have over 7 million more fans. Clearly, that’s not the case.

Sadly, over the past 2 months The Black Sphere Facebook page actually lost about 100 subscribers per day. I’m sure if Zuckerberg appeared before Congress on this, he would say that my page lost follwers due to deaths from COVID-19.

Worse, the Facebook Gestapo ding us for articles posted on our page by others. Below is a list of FB violations reported on my page: 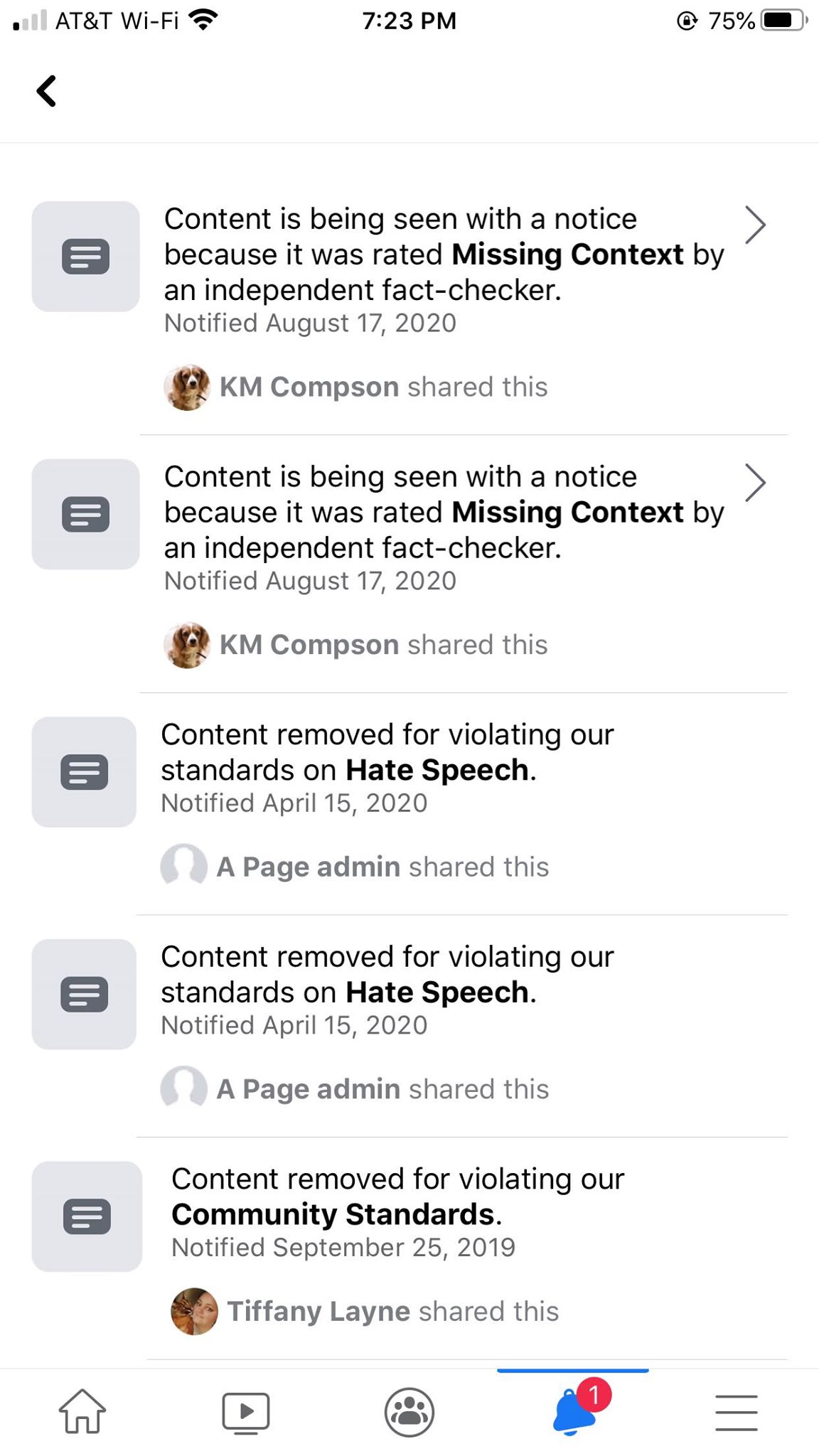 Do you think Facebook gives any evidence of “Missing Context”, “Hate Speech”, or specifically what violated their “Community Standards”?

Further, Facebook often pulls articles after their so-called “fact-checkers” cry foul. I’ve submitted evidence to the fact-checkers, and they still refuse to relent.

Facebook doesn’t even have an appeal process. These third-party researchers are given the final say-so.

There is just no recourse in fighting these goons. No matter how much money you’ve spent building your page, Facebook controls your virtual life and in some cases livelihood.

In my case, these so-called violations prohibit me from running ads on my page. The warning is “clean up your act and say only what we want, then we may approve the ads we deem appropriate.”

How does Facebook “own” your site? They provide a platform that earns billions, soon trillions, from the membership of people building their own little homes inside the community. Imagine if your homeowner’s association told you how to behave inside your home? Worse yet, if they told only your particular church group, soccer team, or political affiliation what to do while ignoring all others. That’s what Conservatives face on social media every day.

Only a couple of weeks ago Facebook removed my movie page, Bleeding Blue. Again, due to “violations of their community standards.” I had no recourse. So we built another page, which Facebook promptly removed. 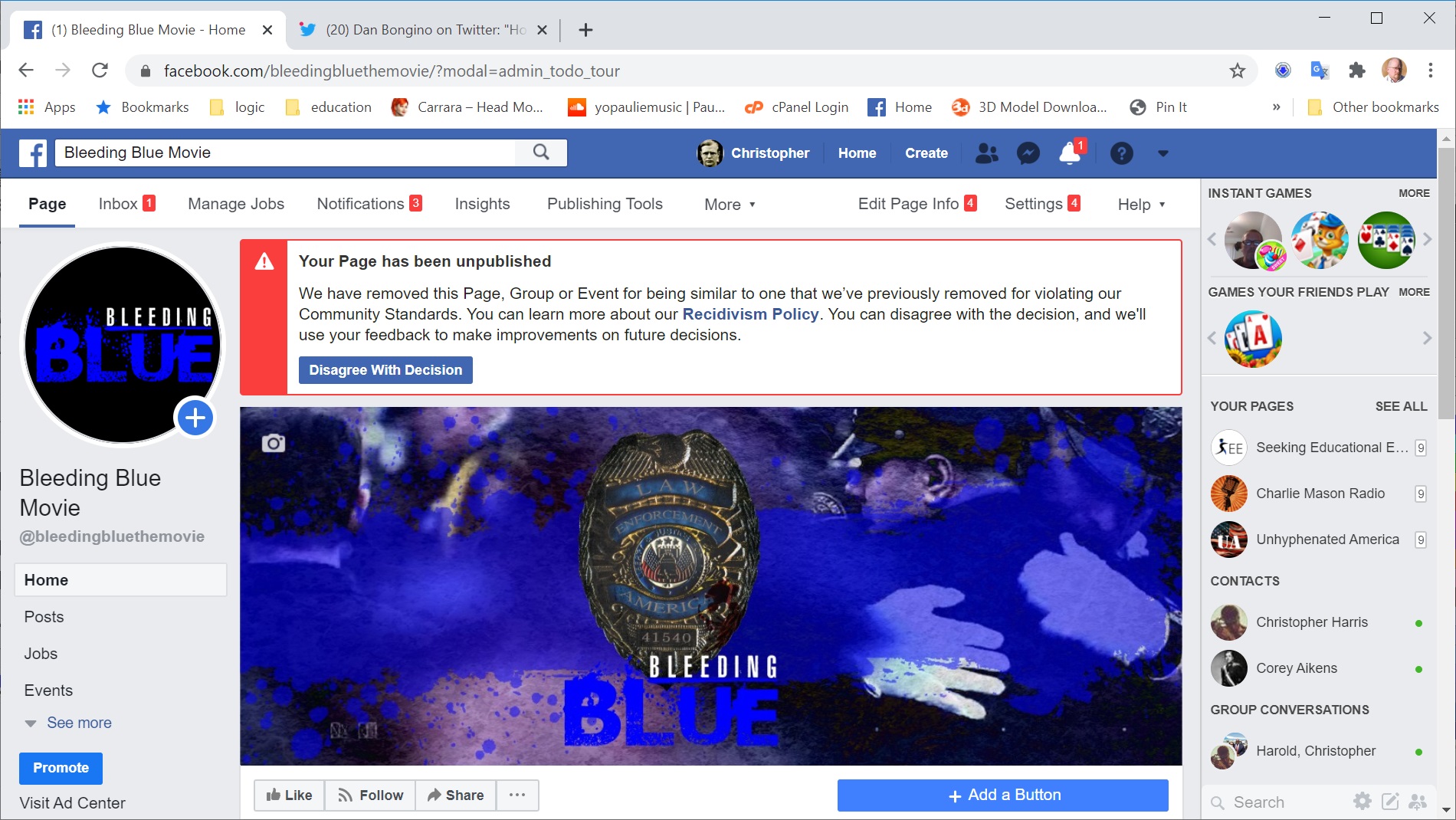 But if I were a member of the New Black Panther Party or BLM and I wanted to “kill Cracka babies,” Facebook would embrace my mission.

One can only hope that President Trump and Congress gets serious about social media. In fact, I hope he issues an executive order that finally puts social media in its place. It would be nice to see Zuckerberg get hit in the pocketbook, as he has done to so many others.

Until then, we rely on our friends to spread the word!