I got another message from a friend that questioned my confidence that Trump will win re-election.

The message read: another friend I trust said that Trump will lose to Biden.

I responded, “I hope you don’t rely on that friend in things of real importance. Because that friend is wrong”.

What in the hell would make people believe Trump will lose? If you missed my video on YouTube answering that question, here it is. But I prefer to deal with a different question.

Is it Biden’s stellar record in politics? 47 years with absolutely nothing to show for it. I say on my radio show that Joe Biden is SHOCKED at how far he got on absolutely nothing. Perhaps looks and faux charm. But in terms of intellect and actual accomplishment, nothing.

Biden is the guy who “looks” the part. Another empty suit, just like the guy who added a few extra years to an otherwise dead career.

Biden was plucked from the dung heap of political history all because he was dumber than the guy who hired him.

My feelings on this are not opinion or conjecture. They’re based on Biden’s grades. The very grades he lied about.

Why lie about where you finished in your class? The guy could easily have said, “I wasn’t the best student, but I stuck with it”. Instead, he lied. Over and over. 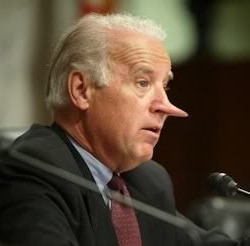 He lied about the death of his wife and baby. Losing them to a car accident was senseless and tragic enough. No need to paint the other driver, who by the was WASN’T at fault, as a drunken criminal. But the lie got him a few more sympathy votes.

Then Biden lied about his record on Civil Rights, claiming to have marched with heavyweights. Biden lies about getting arrested.

He stands on the periphery of history because he’s accomplished nothing. And he so wants to accomplish something. To have somebody say to him, “Joe, this is a big f’g deal!” But historic moments are not created by men like Biden. They stand in the shadow of those who are the true history makers.

That’s why Biden lies. But when he’s not lying, he’s putting his foot in his mouth. Correction: racist mouth.

Biden is the quintessential Leftist racist. He doesn’t know he’s a racist, which makes him a stupid racist. His latest comment about some Black woman stocking shelves allowed him to hide from the Wuflu.

How detached is that. Why didn’t he choose a white woman? Or the more likely choice, a Mexican man?

Or what about when challenged about drug testing, did he ask a Black host if he were drug-tested for cocaine? And Biden said it in the vernacular.

I want somebody from the Left to tell me what Biden brings to Democrats. Passion? Energy? What am I missing?

Because I see a frail old man, mostly hiding from the public. A man who thinks he can win a race campaigning 2 hours a day against the best president in modern history.

Biden doesn’t have a weaponized Department of Justice running interference for him. In fact, quite the opposite, as the DOJ now sets its sights on the Biden family.

He can forget the Black vote, even after choosing Kamala Harris. Donald Trump will triple what he got of the Black vote in 2016, landing solidly in the 20+ percent range.

Think Biden will get all the youth vote? The Latino vote? The union vote? Where are Biden’s new votes coming from? His base eroded from him from the moment he announced. 41 percent approval that dropped daily. Many Democrats thought he would drop out. But he held on. And in uncontested primaries, Biden couldn’t get over 80 percent. In Kentucky, Biden got an embarrassing 57 percent of the vote. I repeat: uncontested.

Think people will forget Biden’s age or dementia? I recall one poll where 20 percent of Democrats believe Biden has some brain dysfunction. And what of the “Bernie or Bust” crowd? Think they’ve forgotten that Bernie bugged out on them again? And what of their undying love for Biden?

I think you get the sarcasm, as there is no enthusiasm for Biden. None.

A rally would embarrass Biden and the Democrats. It would spoil the fake news narrative of a Biden blowout. The Democrats need the perception of polls, just to keep the illusion of Biden as a viable candidate alive.

Biden and team are drunk on polls they’ve created. That’s all they have. Obviously Democrats love the feeling of believing fake polls. But the problem is polls end in reality. And just like in 2016, Democrats will learn that reality is a motherf…well, you know the thing.