Go ahead, admit it. You didn’t pay attention in Civics class. So, you only have a basic idea of how government works.

Don’t feel bad. This is true of 99.99 percent of America. But that 0.01 percent who knows how things work run the country.

As they say, “The Devil is in the details.”

For decades, politicians (the devils) have nuanced (the details) their way into power. A slow boil of the American taxpaying citizen. And ironically, we’ve financed their onramp to power.

America has its royal families. They might begin in business. But as sure as the sun will rise in the East, they transition from business to politics. Because politics is where the real money and power is.

The only politician of note who has avoided this trap is Donald J. Trump. And look what the powerful people did to him. A billionaire political ingenue run out of DC on rails because he dare not seek the very power they accused him of obtaining. Dictator.

Who are the dictators? The families who have run politics, local, regional, and national. There are many, like:

And then there is Nancy Pelosi and her nephew, Gavin Newsom.

Examine California objectively, and you see Leftism on steroids

The recall effort aimed at California Gov. Gavin Newsom is steadily marching toward gathering the 1.5 million signatures needed to reach the ballot.

The prospect that the effort may reach that goal before the March 17 deadline has Democrats worried:

California Democrats and their political backers are bracing for a campaign nevertheless as recall organizers turn in hundreds of thousands of signatures. State lawmakers are proclaiming their support for Newsom, seeking to tamp down any signs of disunity. Interest groups and donors who would be called upon to fund a recall defense are quietly ramping up, with one union launching the first public counteroffensive.

Newsom and the Democratic apparatus that runs the Golden State has every incentive to go to war against a recall effort. Holding the state’s top office is a plum for any political party. That’s why some are urging Newsom to get busy preparing now for a recall campaign:

“I do think at some point he needs to open a recall committee,” said Democratic consultant Andrew Acosta, “start taking this s— seriously, and start going to war.”

“Going to war” over an office that is, in theory, a public trust. That’s what is wrong with politics and the major political parties, in a nutshell.

But the mainstream media downplays the danger to Newsom’s seat. Instead, they work to distract people with headlines about Newsom and coronavirus vaccines. 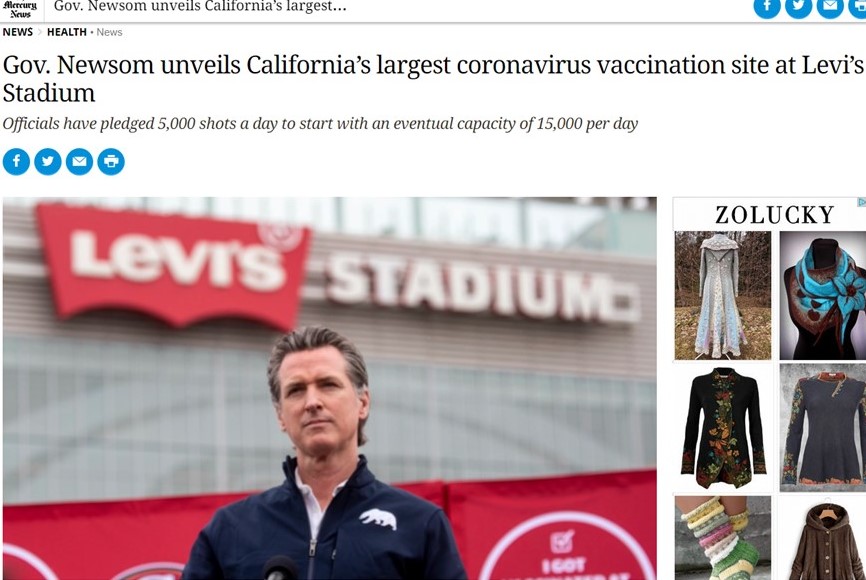 I don’t even want to dive into the vaccines, other than to say this is not a show of Newsom’s dedication to his people. And his people aren’t being fooled right now.

The mainstream media is so afraid of Newsom’s demise, they’ve conspired to keep the truth hidden.

And social media is complicit in the cover-up.

As I recently wrote:

The Chairman for Reform California, a group petitioning for Newsom’s removal, now says they’ve been warned by Facebook. The group can no longer place ads calling to withdraw Newsom from office.

Despite their constitutional right to shine a light on this election non-sense, Facebook squashed Reform California’s voice with the click of a mouse. Just as Twitter recently removed the well-known radio host and found of The Gateway Pundit, Wayne Allyn Root. Why? Because Root and his team unearthed video evidence of improper handling of absentee ballots. That’s a pretty big deal right now. So instead of looking for the real criminals of 2020, Twitter chose to wipe more conservative news from its platform.

For now, the tactic is working. And liberals are following along like little drones. But soon, truth will take over like a Wonder Woman lasso. And if you think Gavin Newsom is running now, wait ’til the pop of that golden rope gets ahold of him.