Joe Biden doesn’t know whether to scratch his watch or wind his butt. However, he does know how to piss off America.

This time, Biden stunned country music fans. And patriots. He did something even Obama would never do.

If you’re wondering “why the buildup?” Well, I can barely type the words, because I’m truly offended by the President’s latest ridiculous move. Biden took Lee Greenwood out of the National Endowment of the Arts.

Full disclosure: In high school, I was band nerd. Marching band, choir, debate team, these are all considered “arts.” Being part of those activities made high school my sanctuary. My life might have turned out very differently if I didn’t have those extra-curriculars to keep my focused. So, when I became a mother, I looked for the right activities for my kids.

You know what they say, “idle hands are the devil’s handiwork.” I’ve just always believed that being part of a team is a fundamental skill. You’re not just marching the shape of a longhorn across a football field. You’re collaborating, working together, respecting one another’s time, balancing each other. And when your school days end, you take those skills into the workforce.

Without the National Endowment of the Arts, hundreds of thousands of people would never even be exposed to the arts. If you don’t understand what makes this agency so special, consider this mission statement from their website:

The National Endowment for the Arts provides national recognition and support to significant projects of artistic excellence, thus preserving and enhancing our nation’s diverse cultural heritage. The Endowment was created by Congress and established in 1965 as an independent agency of the federal government. This public investment in the nation’s cultural life has resulted in both new and classic works of art reaching every corner of America.

They go on to explain their mission to enhance education:

The Arts Endowment maintains that all children, not only those considered artistically talented, deserve a comprehensive education in the arts, one that enables them to create, perform, and communicate in and through artistic media. The No Child Left Behind Act, signed into law by President George W. Bush in January 2002, affirmed that the art
be considered a “core academic subject,” making it possible for children to receive the arts education they deserve and for schools to receive federal funds from national programs such as teacher training, school reform, or technology programs—that target core academic subjects.

If you want to know more, go to their site. They have 52 pages to back up their mission. But why fire Lee Greenwood? I’ll tell you why. Because Greenwood loves America!

The singer-songwriter is best known for his 1984 hit, “God Bless the USA.”

I must say, I have a very personal connection to this song.

I remember listening to it as a kid. And every time it played, my step-father suggested “God Bless the USA” should replace the “Star-Spangled Banner” as the national anthem.

It was Memorial Day in 1987 when my parents took us to see the traveling wall erected in memory of the Vietnam Veterans who gave their lives. It was a “Welcome Home” parade, more than a decade too late. I believe the Wall was brand new, and making it’s first rounds across the country. There was a huge outdoor concert in Herman Park. It was pouring rain in the muggy 85° weather. The goal was to somehow right the wrongs when it comes to the “welcome home” Vietnam Veterans suffered.

They were protested, spit on, subjected to the horrors of angry mobs. Nearly every Vietnam Veteran I ever met suffered scars from the way they were welcomed home. Hiding their uniforms before they got off the plane to avoid physical attacks. Unable to proudly display their service. And in 1987, someone decided we needed to change the culture and treat all our soldiers with love, respect, and appreciation.

Crosby, Stills and Nash, Kris Kristofferson, James Brown, and James Ingram were among those who performed that day. Stevie Wonder sang “Blowin’ in the Wind” and “I Just Called to Say I Love You.” Surprisingly, John Fogerty broke out the Creedence Clearwater Revival classics like “Proud Mary” and “Born on the Bayou.”

Many country music superstars sang that day. But I will never forget Greenwood on the stage, in the pouring rain, singing “And I’ll proudly stand up, next to you, and defend Her still today. Because they’re ain’t no doubt, I love this land, GOD BLESS the U.S.A.!”

The crowd waived their lighters, most of which were put out by the rain. People were swaying back and forth. Little children were sitting on their parents’ shoulders. As for me, I was eleven years old, and I was deeply touched by the patriotism pouring out. 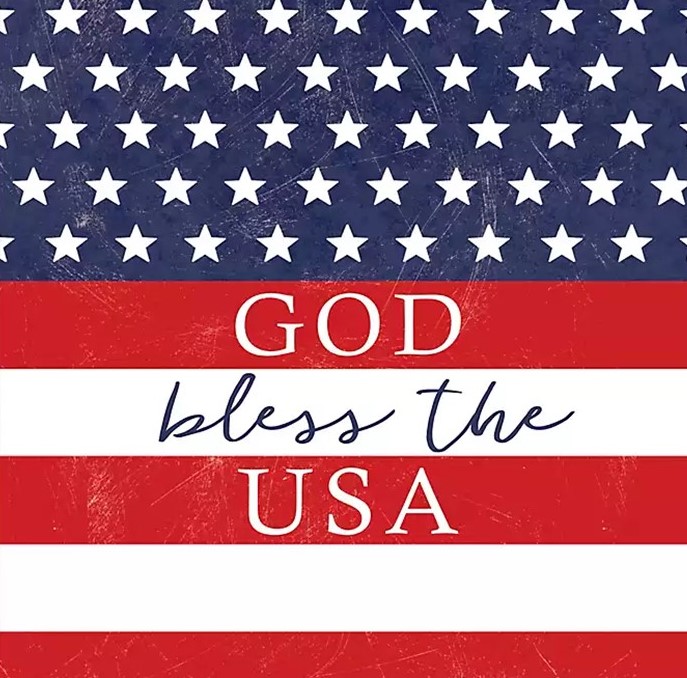 Later that week, I typed out the lyrics to hang in my locker. I had to memorize them, because there was no Google to copy and paste from. I sent the document to the dot matrix printer in our computer literacy class. But I accidentally hit 11 copies instead of 1. Dot-dot dut-dot dot dut dut dut dot… that printer took forever to spit out eleven copies. And there was nothing I could do to stop it.

It was an embarrassing moment. The teacher called me out for all the hoopla. But surprisingly, my friends also wanted to hang those lyrics in their lockers.

We Were All Kids, And We Were Proud to Be Americans!

Later down the road, my step-father passed away. When he did, I learned my children all believed Greenwood’s song was “PawPaw Quinn’s anthem.” He was laid to rest on the Marine Corps’ 240th birthday, and on the way home we listened to Greenwood while tears ran down every face.

Back during the Gulf War, the song morphed into a symbol of patriotism. Thus, in 2008, George W. Bush appointed Greenwood to the council of the NEA. Greenwood went on to serve under President Obama and President Trump. He’s held the role for 13 years, maintaining bipartisan respect. Yet, Biden dropped Greenwood like a hot potato.

That’s how Biden cleans house. He doesn’t remove the incompetent criminals. Only those who wish to serve our country well.

Singer Lee Greenwood told Fox & Friends that he’s “shocked” at being replaced on the National Council on the Arts by the Biden administration.

Greenwood, who lives in the Nashville area, told the national outlet that he was appointed by President George W. Bush and continued to serve in the capacity for President Barack Obama and President Donald Trump. Greenwood added “as you know he used my song ‘God Bless the USA,’ which is unilateral for me. It’s meant for all people, not just for a particular political party.”

The President didn’t even have the class to call Greenwood. Or to send him a letter. He just got a generic email that basically said, “You’re out!”

Unfortunately, Greenwood isn’t the only Trump appointee Biden got rid of.

Now, I can’t help but wonder who will be the next to go? Apparently loving America puts at risk of being terminated.