Anybody paying attention knows that Captain Demento, aka Joe Biden, deserves a D- at best for the economy. And that’s being generous.

Truthfully, the economy is an F. However, that didn’t stop one group from giving Biden a B+ recently.

As Yahoo explains, Biden’s economy is better than your common sense and actual observations show.

We track six economic indicators to assess the economy as ordinary people experience it: total employment, manufacturing employment, average hourly earnings, exports, stock prices and GDP per capita. Biden gets top marks in two of those categories—employment and exports—and high marks in three other categories. The weakest Biden numbers relate to earnings, though those have improved recently.

And they provided this chart. 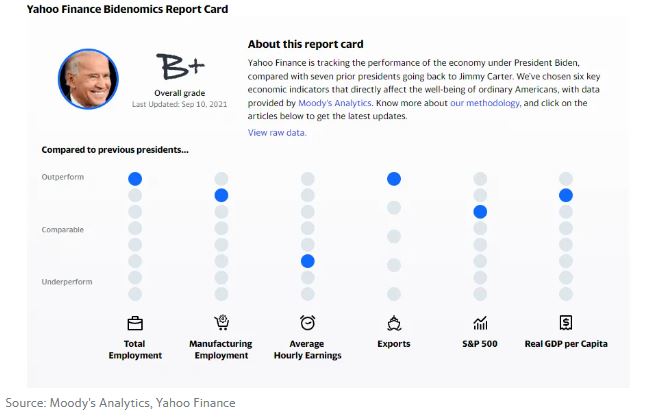 Talk about grading on the curve? And I thought Obama was the Affirmative Action president. While I “ain’t black” since I voted for Trump, Biden must be black to get this much of a curve on the economy.

Apparently, I’m not the only person who knows this report to epitomize “fake news”. Here is a sample of some of the comments.

From who? Inflation has more than eaten away wage gains, there are shortages on the shelves, employment numbers have spectacularly failed to reach expectations the last two months, etc.

The fact that Mr. Biden earned a high B+ grade is not a surprise to me at all, and I had anticipated that he would do so. Since the beginning of his tenure in January, I have seen two unfavorable articles on him while Trump was being attacked daily. Media outlets and reporters should strive to produce objective, fair, balanced, and accurate content for the people who would make their own decisions. Well, that’s my take on it.

Michael comments that Biden’s rating doesn’t match his or most Americans’ realities:

Ricky trying so very hard to tell us that our eyes and wallets are lying. Inflation the highest since the 70’s. A giant tax on Americans. Terrible jobs numbers even while the reopening should create enormous jobs numbers. Supply chain backlogs. A resurgent virus. Businesses unable to fill jobs because of generous government payments and the resurgent virus. An emerging energy crisis that will sap American’s wallets and move inflation even higher. We are reentering the Carter years. Stagflation the new watchword on Wall Street. But according to Ricky, nothing to see here. Move along. LOL. You can’t make this stuff up.

Bull’s comments speak to the future of using fake stats:

‘What do I think?’ the little box asks. I think they need to stop using false data and innuendo. Unless we know the real numbers we are going nowhere-then when it hits it hits-depression. The unemployed also stop [finger] pointing at them that don’t help and is also fake. Adjust off real numbers man, or nothing going to help!

Are you kidding me. Yahoo enough, go out and see how much prices are, go to the gas pumps. Quit praising Biden . Even economist are saying ,even with higher wages, Americans are falling behind. My electric company just informed me my bill was 95 percent higher this year than last. I am a Senior Citizens living on Social Security, how are Seniors suppose to cope?

Understand that more inflation is predicted as winter hits. Electric bills will soar, and the hardest hit will be those on fixed incomes.

I got a screenshot of this, so people would know that I didn’t manipulate this report in any way. In short, you had to scroll quite a ways down to find anybody who agreed with this propaganda piece touting Biden’s economy. Hard to believe, when you consider that Biden supposedly got 81 million votes.

If this continues, Biden will be a one-term usurper. And don’t think President Trump won’t keep the pressure on; reminding people of his tenure and the state of the economy at that time. 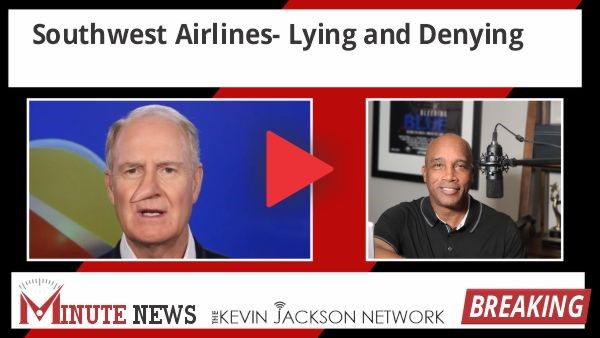