Anybody who dare speak out against the vaccine is quickly put in check. Fast.

Recall when Nikki Minaj sparked an international furor when she tweeted that her cousin in Trinidad refuses to get a vaccine because his friend become impotent after being vaccinated.

“His testicles became swollen. His friend was weeks away from getting married, now the girl called off the wedding”

Minaj revealed the story to her 22.6 million Twitter followers and the powers-that-be targeted her immediately. She just reported what her cousin said to her, and that got her ostracized.

Leftist “vaxxers”, the new separatists equivalent of the “Whites Only” ilk of the 1960s tried to make an example of her. I bet you thought we lived in a world where Black women were impervious to such reactions. After all, don’t Black Lives Matter?

Well another prominent Black person spoke out against the vaccine mandates.

The NBA starts its season on Oct. 19, And the league isn’t requiring players to be vaccinated against Wuflu. However, unvaccinated players will undergo regular testing, including one test on practice or travel days and at least one test on game days.

During an NBA media day on Sept. 27, Washington Wizards star guard,  Bradley Beal, revealed that he has not received a Wuflu vaccine for “personal reasons.”

Bradley even dared to ask questions about the vaccine at the presser. Afterward, he was promptly “fact-checked” by Google for his statement. 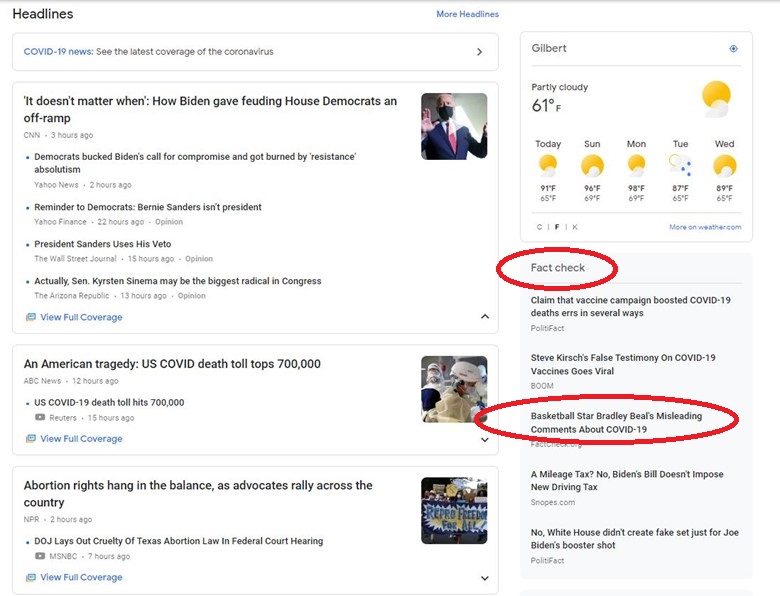 Google’s “Fact Check” area of the main page posted an article stating that “Beal made some misleading comments about their effectiveness”. Worse, what Beal said leaked out to the masses, something verboten in the new Gestapo-controlled media and social media.

Video clips of his comments on Instagram, and posts about the video on Facebook, have reached over 97,000 interactions, according to CrowdTangle analytics.

We’ll address Beal’s questions and clear up some misinformation that may have been spread.

Beal said he “would like an explanation” as to why people who have received vaccines “are still getting COVID, if that’s something that we are supposed to highly be protected from.”

Great question. Particularly if you have the real data. Fact-check responded:

However, so-called “breakthrough” cases of COVID-19 after vaccination are to be expected — perhaps even more so now because of the more contagious delta variant of the virus.

Thanks Captain Obvious. These vaccines are not even 20% effective. But that didn’t stop “fact-check” from providing BS numbers. They continue:

Utter nonsense. These numbers are MADE UP! Paid shills providing whatever data Team Fraudci wants to see.

I’ve said many times that our government will never provide real data on this disease. Because the objective is singular: control of the world’s population.

The New World Order sees this as their opportunity to implement a plan to regulate who lives and who dies. That may seem conspiratorial, but the data more than suggests I am 100 percent correct on this.

If you want to take the shot, take it. But I will never take this shot. And I applaud others who see this scam for what it really is.