I remember the initial hoopla over Wuflu. Both the announcement of the disease and how deadly it was.

Americans were regales with videos of Chinese dropping like flies, publicly. Suddenly masks were in vogue, as were ventilators. We were told that hospitals didn’t have enough room for us, and frankly we were all doomed.

The media padded the numbers of those who died, and they blamed Trump.

Next, Hollywood got in on the act, as we began hearing about Hollyweirdos getting the disease. Anybody remember the notable who got the dreaded Wuflu first?

At the time, there were over 72.9 million cases of the virus worldwide. And on March 11, Tom Hanks announced that he and his wife, actress and musician Rita Wilson, caught the virus while traveling for work. Other actors, such as Idris Elba and Daniel Dae Kim, soon followed with their respective diagnosis experiences, as did performers including Pink, Sara Bareilles, and Doja Cat.

None of them died.

I waited to hear that De Niro, Clooney, Spielberg or somebody like that died. But nobody. Perhaps cameramen, boom operators, or caterers died.

So I ask this question. If this disease is so deadly, then why didn’t any significant Hollyweirdos die?

Now I’m not wishing death on them. But Hollyweirdos were the most vocal about this disease. And their late-night comedy hacks tried to make those of us who called “scam” on Wuflu feel stupid. But we know who the stupid really are.

At their awards ceremonies, why not play an “End of Watch” for all the people Wuflu took out? Because I’d like to see all those Hollyweirdos who died from WuFlu, including cameramen, boom operators, caterers, and casting couch bimbos. I’m confident that list would look like the obituary page from the New York Times.

To test my theory, I googled “actors who died from covid” and here is what came up: 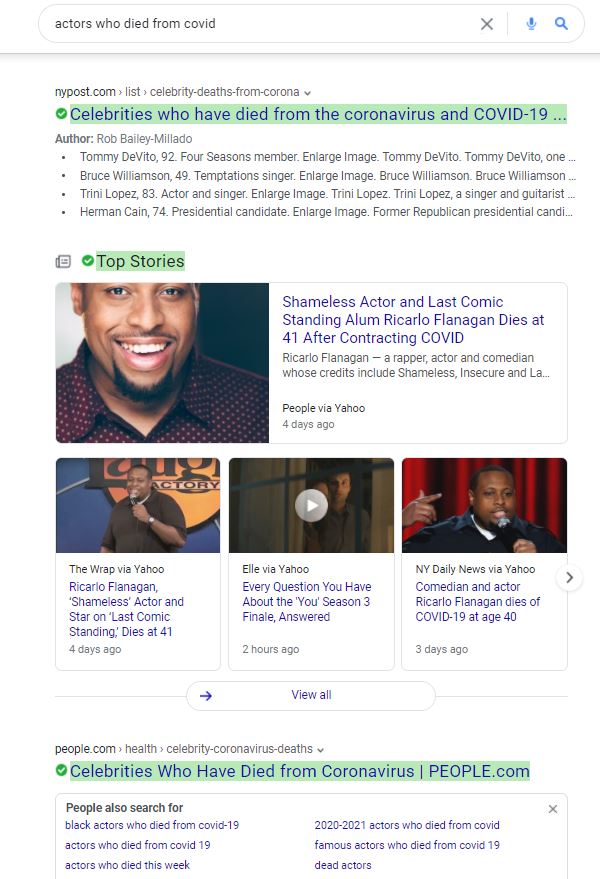 With all due respect to Ricarlo Flanaghan, he is not a household name. So I investigated further.

I scrolled further down, and captured this image from my google search (red emphasis added): 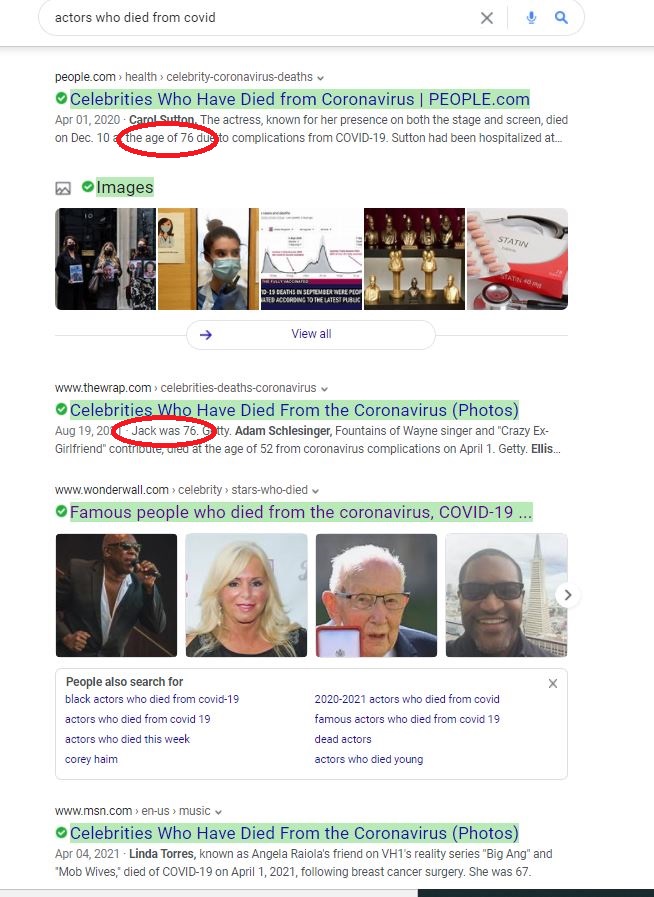 I circled two people who were 76. Honestly, I don’t know who these people are. But there are no De Niros, that’s for sure.

Linda Torres died of Wuflu at the age of 67 and after cancer surgery. Some singer died at the age of 52. There were more, and I didn’t know any of them.

In total, there were 47 people on one of the lists and I didn’t know any of them after scrolling past 20. I quit looking.

My thoughts after looking at this is how many people who work in Hollywood died naturally whom we will never know? And how many of them died of drug overdoses or of natural causes? Fentanyl took out Michael Jackson, Prince, and Tom Petty. Now those are A-listers, gone too soon.

This site documents lost “stars”, and includes some who died of Wuflu. However, most died naturally, as you might expect.

In short, Wuflu had almost no impact on Hollywood. But these people behave like Wuflu is the most dangerous disease ever.