The last time there was a trial like this, I was in high school and OJ Simpson drove a white Bronco.

It was clear from the beginning, this kid should’ve never been on trial. The grand jury shouldn’t have indicted Kyle Rittenhouse. They did so only to pacify angry leftists.

For once, the system got it right. I won’t lie, when the verdict spilled over into day three, I got a little nervous. Like I previously pointed out that this verdict should’ve taken 30 minutes, tops. Never have I seen a prosecution do such a good job of helping the defense.

Time and time again the prosecutor, Thomas Binger, pointed out the dire straits Rittenhouse was facing when he pulled the trigger. I’m surprised Binger wasn’t walking around chanting “if the glove doesn’t fit, you must acquit!”

Obviously, this guy is the butt of every lawyer joke ever written. And he knows it. Which is why Binger made it clear days ago that he wouldn’t comment on the verdict. 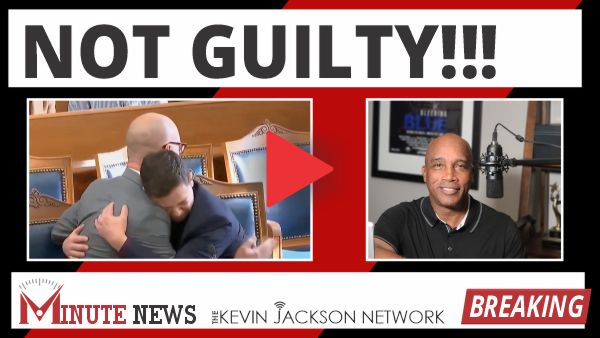 Thomas Binger, the assistant district attorney in Kenosha County and the lead prosecutor in the state’s case against Kyle Rittenhouse, says he will not speak to media about the case or about its outcome when a jury reaches its verdict.

In a statement released to media Tuesday, Binger said that Wisconsin Supreme Court ethics rules will preclude him from making comments about the case in interviews or press conferences.

“I understand and appreciate your responsibility to report on this case and provide information to the public,” Binger said in the statement. “In considering your requests, I have reviewed Wisconsin Supreme Court rules 20:3.6 and 20:3.8, which set forth the ethical responsibilities of attorneys and, in particular, prosecutors with regard to trial publicity.

“In light of these ethical guidelines, I have concluded that it would not be appropriate for our office to comply with your requests,” he added.

It seems as if everyone saw the writing on the wall. Still, the jury hesitated to finalize their decision.

Clearly, there was a real possibility that ‘fear of the backlash’ could influence the jury’s decision. That’s quite a bit of pressure to sit in a courtroom while angry mobs chant outside.

Jurors were videoed by media outlets seeking to follow them. Protesters made statements regarding their intentions to “burn the city down” if an acquittal happened. But right is right, and wrong is wrong. And Rittenhouse was in the right.

In fact, here’s the verdict breakdown.

I think most of the country is breathing a great big sigh of relief right now. I know I am. Even my kids followed this case closely. Last night, my eighteen-year-old son read me some comments from one of his social media forums. A fellow car enthusiast promised to pack it up and move to Texas if Rittenhouse was convicted.

Just watch as an emotional Rittenhouse realizes this nightmare is finally over.

WATCH: Kyle Rittenhouse receives the not guilty verdict on all five counts.

Kenosha might go up in flames tonight, but if it burns, it burns for doing what was right.

The Kyle Rittenhouse jury gives me hope for America. Even when faced with a violent and hate-filled mob, they still did what was just and right.

We are a nation of laws, not mob rule. A good day for America!

One Tweeter acknowledged the much bigger picture here.

It wasn’t just about Kyle. It was about guns and the right to defend yourself.

Of course the wackadoo leftists want to weigh in. But so far, it looks as though the social media warriors are working to keep them in check.

Where are you getting white supremacist from? Please for the love of god explain

Unfortunately, it’s too early to give the all clear. Because the threats of violence are simmering. I expect Kenosha to take another big hit. But maybe, just maybe, law and order will continue to prevail. Please join us in praying for Kyle, Kenosha, and all those closely tied with this case. In fact, join us in praying for our country, especially our leadership, or lack thereof.

Check back here soon, as we will keep you updated on all things Kenosha. Facebook and Twitter can ban us all day long, but the Kevin Jackson Network continues to fight for conservatism in America in every possible way.