As if anybody needs another reason to avoid the death poke? The vaccine that kills also maims.

Enlarged hearts have the vaccinated dropping like flies. And when that’s not happening, they shake like Chihuahua’s passing a peach pit from GBS.

Then there are blood clots, massive fatigue, and a host of other symptom that offer “no joy”.

The “cure” is worse than the disease. And the list of potential side-effects grows longer.

We are learning from The Daily Mail that the Wuflu vaccine may cause men to develop pus-filled lumps on their faces.

After taking the Moderna Wuflu death poke, some patients have facial swelling, crusting on the cheeks, and pustules. Honestly, you don’t want to see what this side effect looks like, because once you do, you can never unsee it. 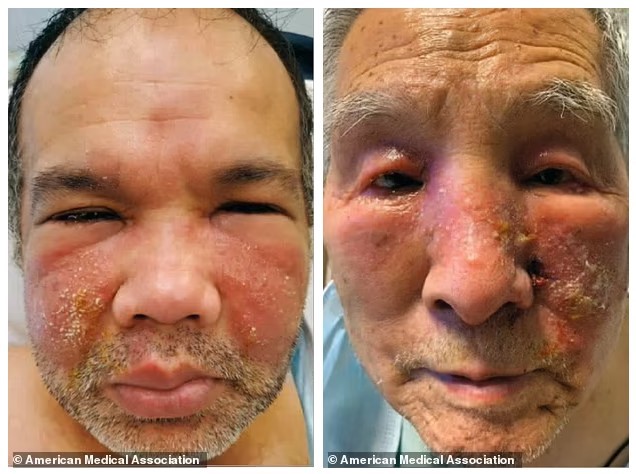 Scientists at the University of California, San Francisco, detailed these patient’s visits to the hospital. Based on clinical studies some antibiotics and ointments resolved the conditions within 10 days.

While this recent development involves only two men, this is not the first time that Moderna recipients have reported skin reactions.

Earlier this year, some people reported developing ‘COVID arm’. Sufferers described the side-effect as itchy or swollen skin seven to 10 days after being immunized.

The two other men

In the case reports, published in JAMA Dermatology, a man in his 50s went to the ER four days after receiving his first dose of the Moderna vaccine. When he was examined, he had chills but not a fever. However, the man experienced excessive swelling, and pustules on his cheeks and near his eyes.

He had no history of allergic reactions, nor was he using facial fillers. The man also had crusting on his face. Finally, he didn’t have rosacea–a skin condition that causes redness and visible blood vessels in the face.

Doctors prescribed the antibiotic Cephalexin, and a topical corticosteroid, halobetasol. After treatment, the condition improved within seven days.

The second patient was a man in his 80s. He visited the ER five days after being administered his second dose of the Moderna vaccine. The man informed doctors within 24 hours of the shot as he had facial swelling that worsened over the next few days, accompanied by redness and pain, as well as fatigue and fevers.

Like the other patient, doctors examined the man and found small red bumps on the skin, pustules, and crusting across his cheeks and nose.

He has prescribed two antibiotics as well as tacrolimus, an immunosuppressive drug.

One thing we know for sure is that neither man would have needed antibiotics or other drugs had they not received the vaccine.

Based on research, the team believes the vaccine caused an overreaction in the men’s bodies. The white blood cells of their immune systems launched a counter attack against the Moderna vaccine. This internal battle caused their rash and other symptoms.

“The clinical presentation of a facial rash with pustules and the shared…findings of a dense neutrophilic infiltrate…support a facial pustular neutrophilic eruption as the reaction pattern,” the authors wrote.

“Reassuringly, this facial pustular neutrophilic eruption resolved within seven to 10 days and without serious [after effects].”

“This is consistent with evidence that most cutaneous reactions that are associated with the mRNA SARS-CoV-2 vaccines are generally self-limited and minor.”