Leftists lie for sport. And they won’t tell the truth even if you put a gun to their wicked heads.

Look at how things unfolded when Bill Clinton was snagged; he redefined sex. And if his case of “lying skank” won’t convince you, then what about Jussie Smollett? That Negro knows he staged his own ass-kicking. Yet, he defends himself in court. I don’t know a Conservative who would have gone this far pedaling either of these two blatant lies. But Clinton and Smollett held to their dishonesty.

Both Clinton and Smollett serve as examples of all Leftist liars; they are not outliers. Thus, lying represents normalcy in Leftism. And such is the case for the scamdemic of “COVID”.

The Chinese bioweapon hasn’t killed a fraction of the people Leftists claim it has. Meanwhile, vaccines have done far more damage than Leftists will admit.

As we’ve learned, the media love to report Wuflu vaccines as safe and effective. Therefore, anybody who speaks to the contrary is “anti-vax,” the strategy of labeling of the enemy.

Clearly, the media regale on the deaths of people who are against the vaccine. To hear Leftists media reports on the death of Conservatives, you’d think we never die.

But we do die, and some of us have even succumbed to the dreaded Wuflu. When that occurs, headlines that read [pp] “Prominent anti-vax conservative dies of COVID”.

If you happen to read further, you find out the guy was 90 years old and had emphysema. In one such article at the black website Newsone, they posted an article titled: “Famous anti-vaxxers who have died from Covid-19.”

The first example they showcase is the 64-year-old founder of a Christian television network that was critical of COVID-19 vaccines died on Tuesday after contracting the virus.

Marcus Lamb, a Christian evangelist who founded and was the president of Daystar Television Network, died Tuesday, the network announced in a tweet.

Famous? Perhaps in his circles. But I don’t think I know two people who know who Marcus Lamb is.

Here is the list of others the article touted. See how many people you know:

That list represents the high-profile anti-vaxxers who have died from Wuflu.

But what of the high-profile pro-vaxxer Leftists who have died from Wuflu?

I googled it, and here is what came up? 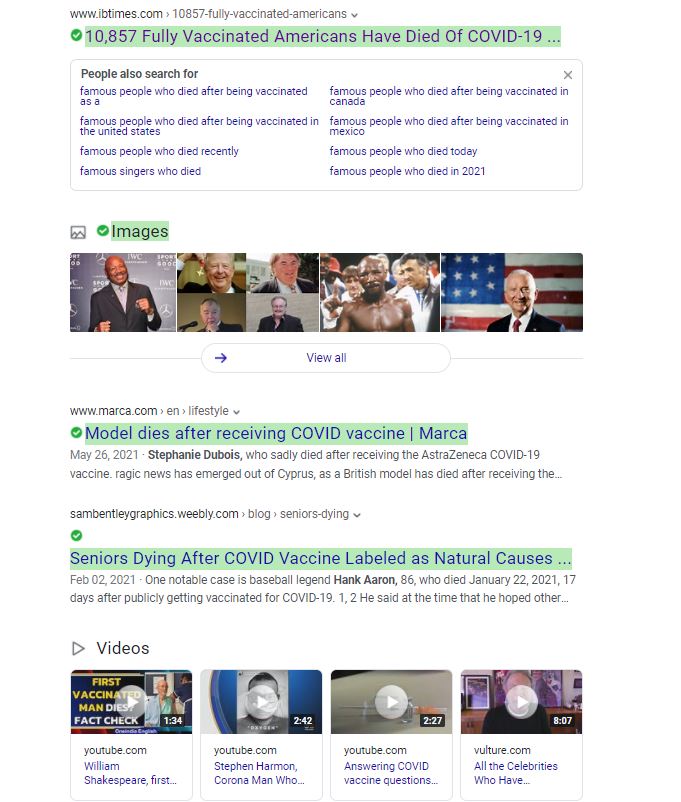 The only notable celebrity I found was Marvin Hagler; and he is only pictured. Next, you see “Model dies after receiving COVID vaccine”, and that’s on a site called Marca. Not exactly mainstream news.

However, I saw some questionable deaths potentially related to Wuflu vaccines. Cases where the cause of death wasn’t reported. Such as heart-related issues for somebody under the age of 60.

What of non-celebs who died from the vaccine?

I learned that more than 6,000 fully vaccinated Americans have died of COVID-19 since the beginning of the pandemic; this is according to the Centers for Disease Control and Prevention.

As of Oct. 4, the CDC has received reports of 6,617 breakthrough COVID-19 deaths among fully vaccinated Americans. Of the total number of deaths, 86% or 5,660 occurred in people aged 65 and older; 44% or 2,902 occurred in female patients; and 15% or 968 involved patients who did not exhibit coronavirus-related symptoms or whose deaths were not related to COVID-19.

That’s a lot of deaths. Particularly when you consider that survivability of Wuflu is over 99 percent.

Note that last data point of 15 percent. These deaths were not related to Wuflu itself, but other things. I’m guessing “other things” is code for myocarditis or some other heart-related issue.

And if you thought the vaccine would keep you from getting sick or hospitalized, think again.

Again, 15 percent of people admitted to hospitals after getting vaccinated had nothing to do with Wuflu. But you can bet it had to do with side-effects of the vaccine.

So where are the websites with high-profile PRO-vaxxer Leftists? Trust me, they should exist. But the list would scare the sh*t out of the public.

These vaccines are dangerous. And anybody promoting them should be imprisoned. One day this truth will become self-evident to more than the people who refuse to get this vaccine.