The world of racing just got even more exciting for NASCAR driver Brandon Brown. All thanks to Joe Biden.

Or shall I say “all thanks to Americans and their opinions of Joe Biden,” to be more clear? What started as a nation shouting “F— Joe Biden” at sporting events across the nation morphed into a much more benign phrase. While the wording lacks the profanity, it packs the same punch.

For Brandon Brown, he could barely contain his excitement after winning his first NASCAR Xfinity Series. But he had no idea he was about to change the course of a nation.

Brown spoke about the win with NBC after the race. After Brandon thanks all his partners, the interviewer says, “Brandon, you also told me — as you can hear the chants from the crowd,” followed by a cut to the crowd clearly yelling “fuck Joe Biden” before she continues, “‘let’s go Brandon'” before continuing the interview. The clip was shared to Twitter[1] by @TrumpJew2 on that day, gaining over 3.8 million views, 28,000 likes and 10,000 retweets in four days (shown below).

Over the course of early October, Twitter users began using the phrase “let’s go Brandon” in place of “fuck Joe Biden” in order to criticize the President, as well as the hashtag “#LetsGoBrandon.’ On October 3rd, Donald Trump Jr. posted, “Great to see real America representing loud and proud. ‘Let’s go, Brandon!'” along with photos of people holding a “fuck Joe Biden” flag, gaining over 51,000 likes and 8,400 retweets (shown below). On October 4th, Brown tweeted,[7] “Let’s go Brandon,” adding in a comment, “not political… just feelin myself,” gaining over 15,300 likes and 2,000 retweets in two days. 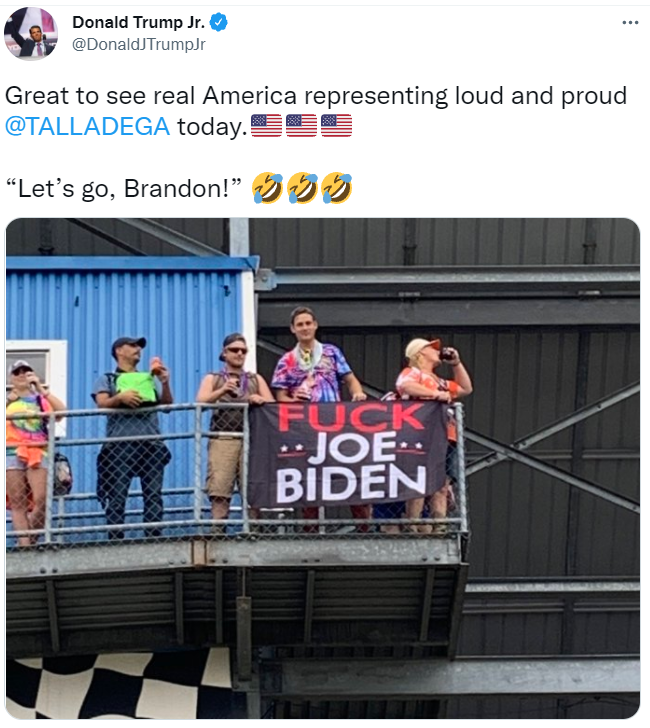 On October 5th, Twitter[5] user @atensnut tweeted, “Kill The Bill Let’s Go Brandon,” gaining over 7,300 likes and 1,100 retweets in a day. On the same day, Twitter[6] user @ThatGuyBrian3 posted a video of people chanting “fuck Joe Biden” at a Jets game captioned “Even Jets fans are on the ‘Let’s go Brandon’ train” (shown below).

Next, on October 5th, Twitter user @RealMattCouch posted a photoshop of AOC’s “tax the rich” MET Gala 2021 dress replacing the words with “let’s go Brandon,” gaining over 2,900 likes in a day (shown below). 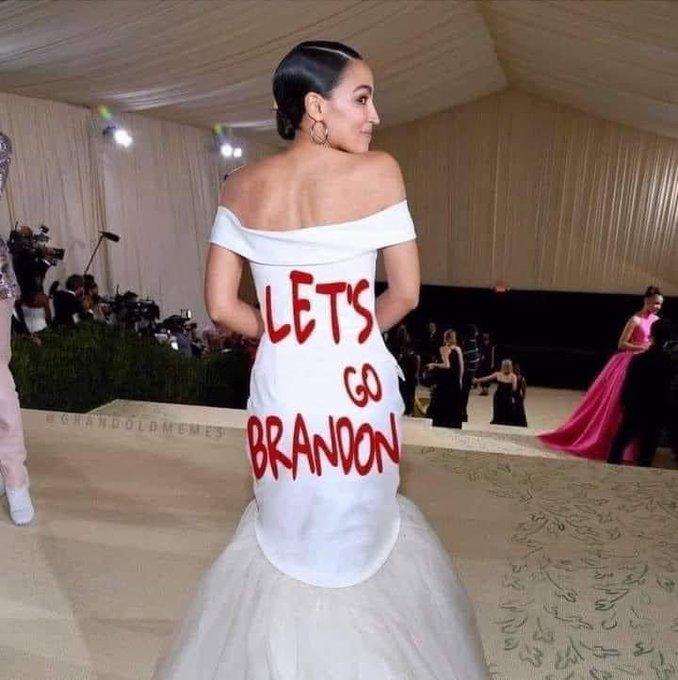 On October 5th, Ben Shapiro’s news site The Daily Wire[4] began selling t-shirts with the phrase on them (shown below, left). On October 6th, Donald Trump Jr. posted a meme on Instagram[12] showing Donald Trump on a flip phone in a pink hat reading “let’s go Brandon,” gaining over 328,000 likes in two days (shown below, right). 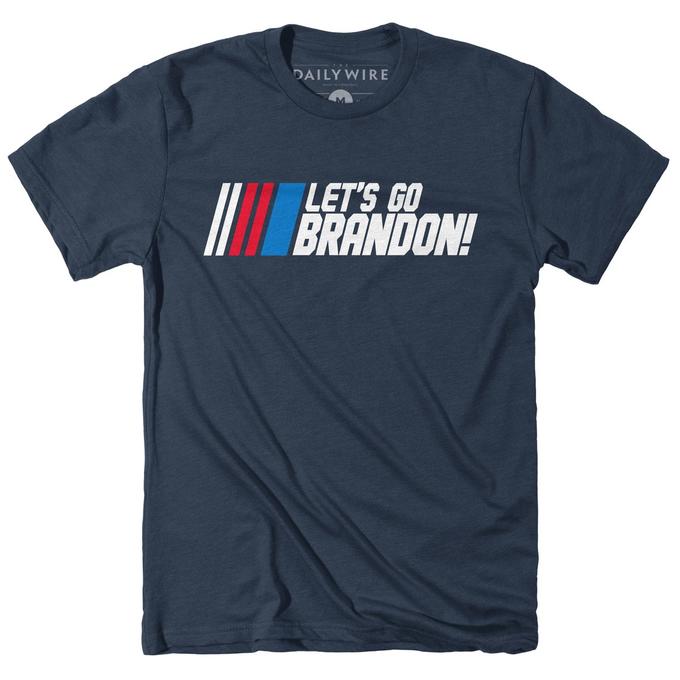 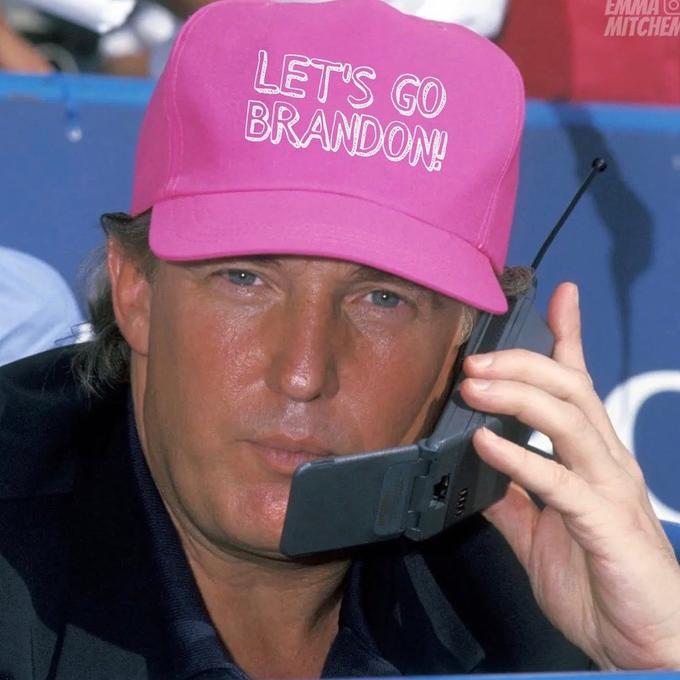 Then, on October 7th, Twitter[8] user @abigailmarone shared a video from a Fox News live interview of a man saying why he watches Fox News and then finishing with “let’s go Brandon,” gaining over 2,400 likes in a day (shown below).

On the same day, Benny Johnson, a chief creative officer at Turning Point USA and host of “The Benny Show” interviewed Ted Cruz about the chant. He posted the clip to Twitter[11] (shown below). Cruz says “let’s go Brandon” is one of the funniest things he’s ever seen and that it “captures everything about fake news all at once.”

On October 8th, Scott Adams, creator of Dilbert, tweeted,[9] “Suggestion for Trump’s 2024 presidential campaign slogan: ‘Let’s go, Brandon!'” gaining over 3,500 likes in two hours. On the same day, @Brick_Suit posted a video to Twitter[10] captioned “Someone just paged Let’s Go Brandon at Chicago O’Hare” showing a man in a suit talking to an airport employee behind a desk, then a call over the airport’s loudspeaker asking for passenger “let’s go Brandon” to report to a gate twice. The man in the suit then approaches the camera and says “let’s go Brandon.” The video garnered over 1,500 likes and 500 retweets in two hours (shown below).

It didn’t stop there. Next up were the “Let’s Go Brandon” songs. In fact, several Christian rappers tackled the president. During the last week of October alone, all four top spots on the iTunes charts were songs titled “Let’s Go Brandon.”

They include “a song by Bryson Gray at number one, two by Loza Alexander at spots two and five (extended and cut versions) and one by Godz Child at number six. The songs feature anti-Biden lyrics. Loza’s posted a video (shown below, left) for the song on October 10th and gained over 4.4 million views in a month. Gray’s posted a video (shown below, right) on October 29th, gaining over 234,000 views in four days.

On November 1st, rapper Topher posted a song and music video for a song titled “Let’s Go Brandon” to YouTube, gaining over 39,000 views in a day (shown below). Similar to the other songs, it features anti-Biden lyrics. The description reads, “Let’s fill the charts with Let’s Go Brandon songs!!!””

If you’re wondering how Brandon Brown feels about all this, I think it’s safe to say he wasn’t a Biden supporter when this all started.

Now, the soon to be “legendary” driver has been awarded his very own cryptocurrency: LGB coin. And they’ve decided to sponsor his 2022 season. If you’re wondering how NASCAR’s liberal fans are feeling about this, I’ll let you know when I find one. Until then, “Let’s Go, Brandon!” Full speed ahead.