Here’s a little morsel of information that didn’t get much traction during the 2020 election. There was already an investigation brewing into Hunter Biden, Joe Biden, and his brother James Biden in connection with their relationship with, you guessed it, CHINA!

Tell me again how Hunter didn’t sell access to his father to a bunch of communists. Because the facts clearly point to the contrary.

I know tons of conservative sites tried to point out that Biden and son were unscrupulous. But our analyses of the Democrat front-runner and his corrupt family were ignored. Or shall I say “buried”? Because Facebook, Twitter, and other social media platforms did their best to keep the Biden truth hidden.

Case in point, The Black Sphere. As part of The Kevin Jackson Network, the Black Sphere had over a half-million followers on Facebook (and that’s after months of Facebook slowly etching away at our following via shadow-banning and other tactics). Then, November 13, 2020, we woke up to find we had been removed from the FB platform.

If you missed it, here’s what happened. As Kevin Jackson wrote;

Happy Friday the 13th to me. I woke up on that day to Facebook having unpublished my page.

Below is a screenshot of the graphic. 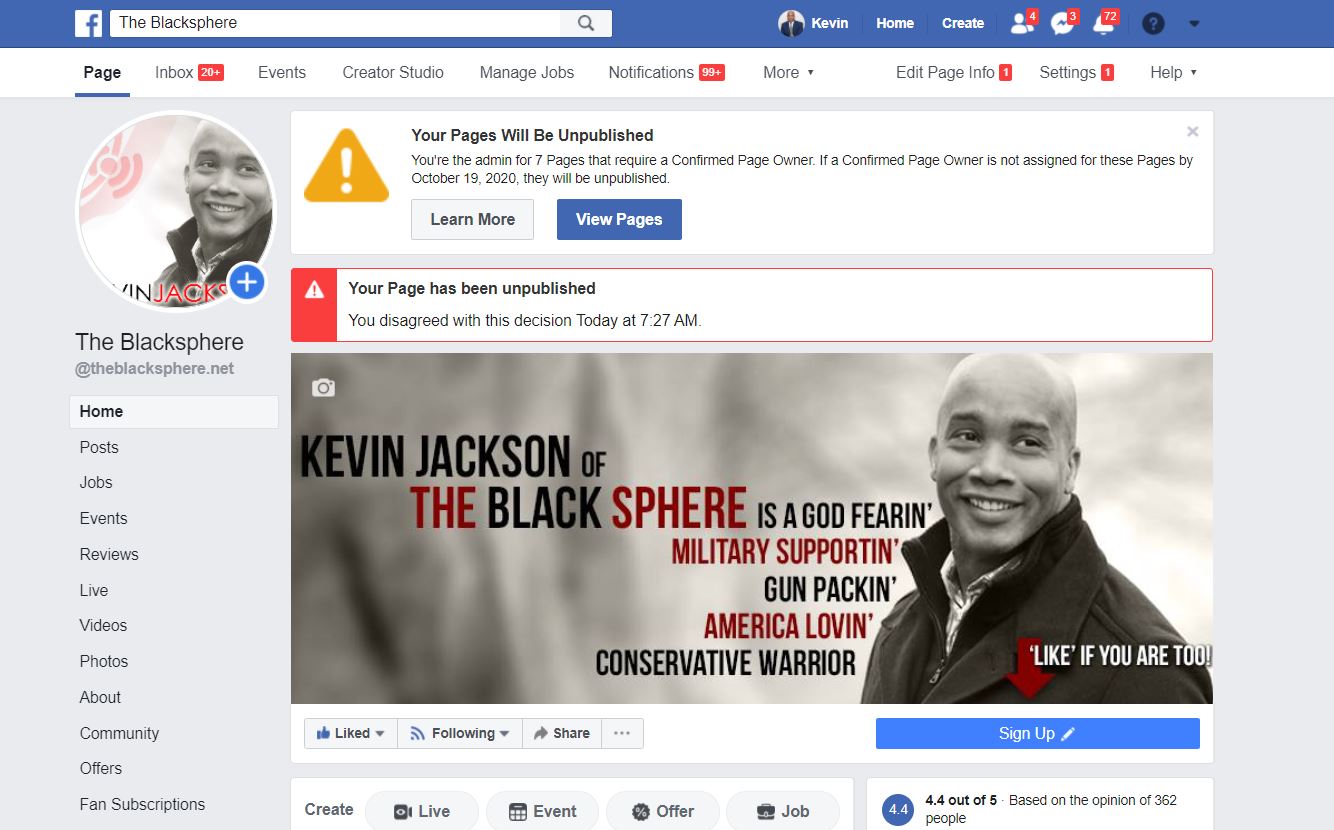 I want to say in “fairness” to Facebook, they are “looking into my appeal”. However, as their next message suggested [pp], “Due to COVID-19 don’t expect answers too quickly as they are understaffed”.

So while Facebook decides my fate on their platform, I’m not able to reach the 560,000+ fans of my work. But let me put this number in historical perspective for you.

I should have about at least 5 million followers on Facebook based on my growth before the shadow-banning.

I have no idea how Facebook will resolve this. Getting my page back is in the hands of a group of people who hate me for being me. They give me a spot on their site that is supposedly MY spot, then whimsically unpublish it.

Whether it’s Facebook, Google, Twitter, etc. the only way for Conservatives to survive is to have DIRECT COMMUNICATIONS with our fans. So I’m challenging each of you to go to The Kevin Jackson Network and join our fanbase.

Of course, Facebook never gave our page back. They don’t even have an official appeals process for unpublishing. And they especially don’t have an appeals process for challenging the so-called fact-checkers. Here’s a little fact to blow your mind. The Facebook fact-checkers don’t work for Facebook. And they’re not experts. They’re just random people on the internet. And if you dispute their fact-check, Facebook suggests you get in contact with them directly, and ask them to remove their critique. Which, they may or may not do, completely up to them.

Now, why would a billon dollar company be unable to have a real fact-checking department? Or, at the very least, an official process? And why have they never answered for removing our page? As we had resolved all but ONE fact-check mark against us. But I digress.

The real issue here is that Facebook is culpable in hiding Biden’s short-comings, including investigations into his questionable actions.

This never happened for President Trump. In fact, Trump was subjected to a witch hunt. But Biden’s real transgressions are repeatedly hidden.

A criminal IRS investigation into Hunter Biden — President Biden’s son — appears to have convened a grand jury as far back as May 2019, a confidential subpoena served to JPMorgan Chase bank reveals. The subpoena also seeks bank records of James Biden, the president’s brother, which appears to be the first time another Biden family member has surfaced in connection with the investigation.

The document appears to show that as President Biden was launching his campaign that spring, federal prosecutors in the U.S. Attorney’s office in Delaware had impaneled a grand jury and were demanding the production of bank records relating to Hunter and James Biden, as well as two of their business associates, Devon Archer and Eric Schwerin.

While it has been reported that subpoenas were issued in a Hunter Biden criminal probe from federal investigators, the level of detail this document contains has never been reported.

The document, dated May 20, 2019, is a subpoena compelling JPMorgan Chase bank to appear in U.S. District Court in Delaware. “YOU ARE COMMANDED to appear in this United States district court at the time, date, and place to testify before the court’s grand jury,” the document — a subpoena to JPMorgan Chase Bank’s subpoena processing office based in Indianapolis — says. “When you arrive, you must remain at the court until a judge or a court officer allows you to leave.”

The document lists a courtroom in the J. Caleb Boggs Federal Building in Wilmington, Delaware, as the location that JPMorgan Chase Bank officials were compelled to appear and commands a response by June 25, 2019.

“You must also bring with you the following documents, electronically stored information, or objects” the document continues, then pointing to “Attachment A” which lists out exactly what the mega-bank needed to provide to the court.

“Attachment A” lists out the following instruction to the bank’s compliance officials: “PRODUCE THE FOLLOWING: All records, documents, and accounts pertaining to all financial/banking transactions with the following known name(s), and/or accounts. However, when conducting your search, please do not limit your scope to only the known account(s) listed below; unknown, associated, signatory, or closed accounts are also requested.”

The document specifically states multiple times: “Do not disclose the existence of this subpoena to the individual or any third party.”

An accompanying letter David C. Weiss, the U.S. Attorney for the District of Delaware, to JPMorgan Chase Bank officials specifies that federal law “makes it a federal crime for ‘an officer of a financial institution’ to notify either ‘directly or indirectly…. (A) a customer of that financial institution whose records are sought by a grand jury subpoena; or (B) any other person named in that subpoena about the existence or contents of that subpoena or information that has been furnished to the grand jury in response to that subpoena [.]’”

Hunter Biden revealed in a statement in December, 2020, just following the presidential election, that he was under federal investigation for possible tax fraud. At the time it was reported by Fox News and CNN that the investigation began in 2018 and was looking into whether Hunter and his business associates violated tax and money laundering laws. Reporting by CNN at the time said the probe was focused on Hunter’s engagements in China and other countries and transactions with “people who posed counterintelligence concerns.”

The probe had been put on hold as the presidential race ramped up, but had allegedly resumed after all ballots were cast.

From there, we know the investigation was paused- to protect the election.

Weiss paused the investigation, deciding not to seek search warrants or issue grand jury subpoenas, to not “alert the public to the existence of the case in the middle of a presidential election,” according to a report by Politico in July, 2021.

The federal investigation into Hunter’s “tax affairs” was reported by Fox News to have been moving forward in March, 2021, and that the U.S. Attorney’s office in Delaware had “not heard from the White House,” at the time.

Hunter Biden revealed in an interview with CBS in April, 2021, that his lawyers were not working on a plea deal in the case. “I am absolutely certain that what we’re doing is being completely cooperative with whoever is asking from any authority whatsoever,” he added at the time.

But what I’d like to know is why are we protecting the “election” as opposed to protecting the voters? Shouldn’t voters be given all the pertinent information needed to make a good decision? Clearly, it doesn’t sound like anyone is making sure America is the ultimate protected party in this situation.