Democrats gathered in Philadelphia this week to regroup. They were looking for Biden to hit reset. And now, they’ve solidified their new strategy: BLAME PUTIN!

Democrats already know midterms will be a red tsunami. How else could it go? Between Biden’s bottom basement approval ratings, soaring inflation, a failing economy, outrageous gas prices, and the many scamdemic truths coming out, there’s not much hope for the left.

With elections looming ahead, Leftists need something to hold on to. They won’t be able to use covid to scare off voters. And they have a lot to answer for. So, what’s the best way to handle things? Just shift the blame, like they always do. And if Putin’s the guy to blame, leftists can pile a lot on his shoulders.

President Biden and his party have moved in recent days to reorient their election-year pitch to voters around Russia’s invasion of Ukraine — seeking to shift blame for struggles to tame rising prices onto Vladimir Putin and promoting the White House strategy to punish the Kremlin as a muscular response to a geopolitical threat.

Democrats said they hope the message, which they honed in political meetings over the past week, will help address some of their biggest liabilities ahead of the November midterm elections. Chief among them are Biden’s low approval ratings and a widespread perception that Democrats are at fault for a sharp increase in inflation.

Now, Biden is repeatedly bringing up “Putin’s price hike” at the pump. White House officials have distributed talking points to allies urging them to echo this line. And Democrats are touting the economic sanctions Biden has leveled on Russia, contrasting them with former president Donald Trump’s praise for Putin.

Ironically, under Donald Trump, Putin didn’t dare invade Ukraine. And gas prices were getting lower every day. Who hasn’t passed a gas pump with a lovely little image of Biden on it? 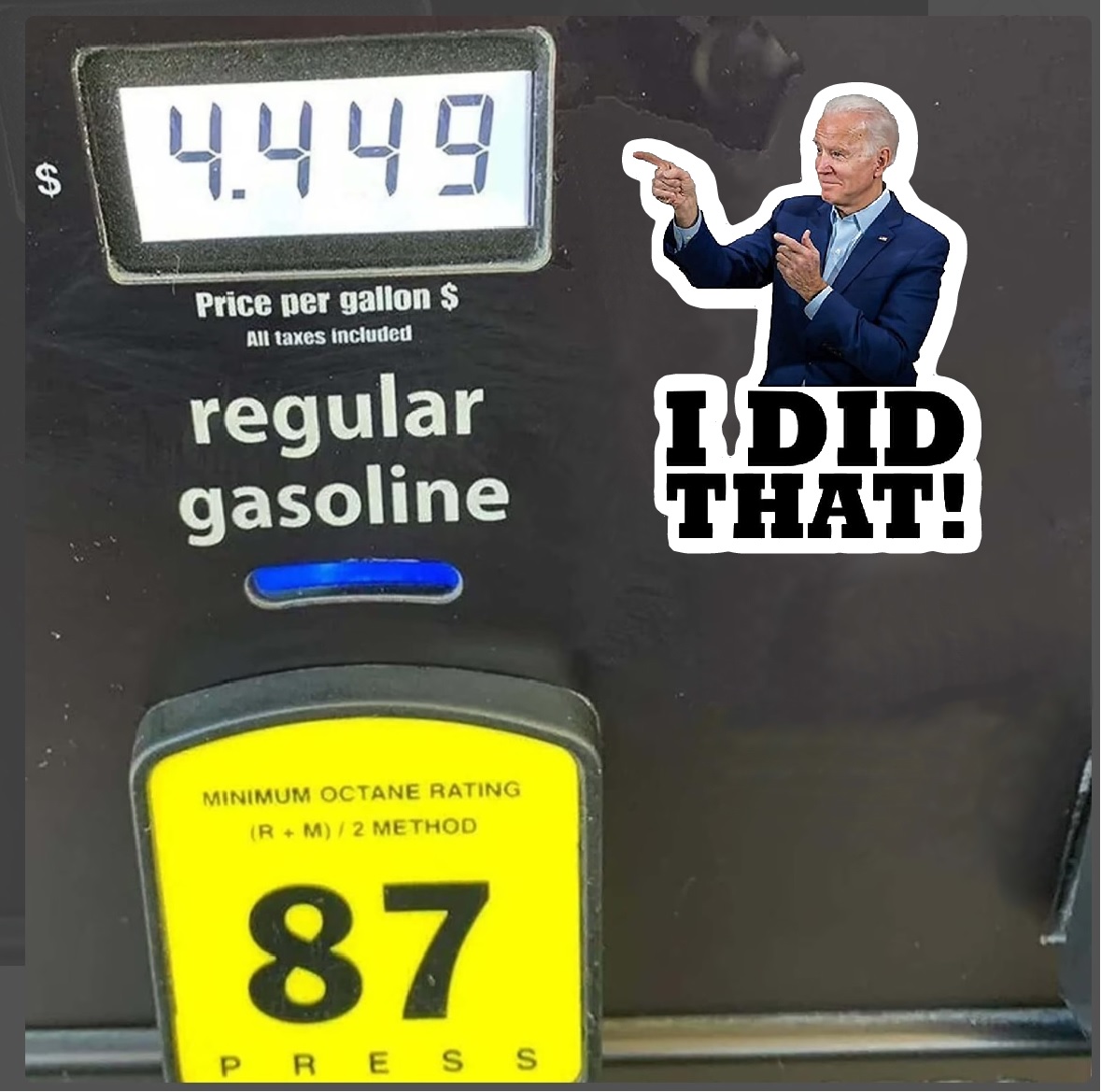 In fact, Biden recently visited Ft. Worth, Texas, where he tried to blame Russia for rising gas prices. But when it comes to oil, Texas is not the place to pass off a few lies. Instead, Texans called ‘bull’ on Biden’s blame.

“That economic bomb that went off inside that dictator’s regime in Moscow would not have been possible without Joe Biden’s leadership,” Rep. Sean Patrick Maloney (D-N.Y.), who leads the House Democrats’ campaign arm, said during the recent House Democratic retreat.

It is unclear whether a revamped message will be enough to help Democrats overcome this year’s stiff political head winds, particularly after months of internal party feuding over Biden’s domestic agenda, portions of which have stalled on Capitol Hill.

Although some Democrats have pointed to encouraging signs in recent public opinion surveys, including support for Biden’s handling of the Ukraine crisis, the president’s overall ratings continue to be underwater, with 42 percent of Americans approving and 52 percent disapproving on average this month, according to a Washington Post polling average.

Republicans, meanwhile, have accused Biden of trying to blame Putin for problems that predated the invasion of Ukraine, saying the administration failed to do more to reduce gas prices and stem inflation. Some in the GOP also have called on Biden to do more to help Ukraine.

“Unfortunately, the Democrats’ wayward leadership for the past year has undermined America’s energy potential with senseless policies that seem designed to reverse decades of success and wreak havoc on our gas prices,” wrote House Minority Leader Kevin McCarthy (R-Calif.) in a CNBC op-ed published online Friday.

Democrats know things look bleak. But I suppose they’ve decided to “fake it ’til we make it,” as they now pretend the doom and gloom of the past few months is being replaced with hope. Realize, all this “Democrat confidence” is just peacocking. They’re trying to look good and play the part, hoping that’s enough to rake in the votes.

Consider Biden’s words to his party: “Putin’s war against Ukraine will never be a victory,” Biden told House Democrats adding later: “We are showing a strength and we will never falter.”

But does Biden think we’ve forgotten a few things? Like when he went down to Ukraine and threatened to pull all their aid from the US if they investigated his son? Since when is Biden Ukraine’s friend?

Further, Biden could’ve prevented this invasion, had he been a strong leader from day 1. Yet, his delayed and incompetent response is supposed to encourage those questioning his leadership to take a second look? Surely not. While Democrats are trying to pretend Biden is showing leadership in Ukraine, the man has done anything but.

The latest moves are yet another attempt to break through with a public that has often been skeptical of Biden’s performance. On multiple occasions during Biden’s presidency, Democrats have sought to recalibrate their appeals to voters — with the White House and its allies initially embracing a sweeping domestic agenda hailed by liberals but, more recently, charting a middle-of-the-road path. The Biden administration initially labeled inflation a “transitory” development before later dropping that language.

Now, Democrats are also trying to ramp up their selling of the party’s accomplishments from the president’s first year — a task some party strategists said they did not do aggressively enough before. Reversing some of the erosion in Democratic voters’ support for Biden will be a key task for the midterms, party strategists said.

They are touting with greater intensity the sweeping infrastructure and pandemic relief laws Biden signed and are mentioning Ukraine and Russia to amplify their argument that the party has prioritized American economic and security interests.

The midterm tactics coming into focus amount to welcome news for many Democratic lawmakers, who had largely looked to Biden and the White House to help shape their campaign pitch to voters in a year that many expect them to lose their congressional majorities.

No matter how Democrats try to frame this “retreat,” a “reset” is not happening. Voters don’t need Ukraine to prove we have a worthy leader. Because Biden’s leadership is the reason a war in Ukraine broke out. A sad outcome that was predicted long ago by President Nixon during the collapse of the Soviet Union.

Biden sold himself as the Anti-Trump. He promised to “build back better.” Turns out, all he really did is take away America’s greatness, again. Now, he wants to be seen as a man that restored the United States.

“Coming out of the State of the Union, we are in the strongest position we’ve been in in months,” Biden said in his DNC speech. “We have a record — a record to be proud of; an agenda that addresses the biggest concerns here in America, in people’s lives; the message that resonates.”

He added: “Now, what we have to do is we have to sell it with confidence, clarity, conviction and repetition.”

It’s seriously laughable. If only it weren’t also so tragic.

If Biden is such a leader, what happened to our border security? Why are our dollars losing value? Why is gas so expensive? Worse yet, what happened in Afghanistan? Why are Americans still trapped there? And what will Biden do about Russia and Ukraine? Besides blame Putin. Because that’s not enough to save Biden’s sinking ship. It will soon meet the same fate and the RMS Titanic.