It’s been nearly two weeks of fighting, yet Russia doesn’t seem close to accomplishing their goals.

Sure, they’ve destroyed a lot of buildings and killed a lot of people. But Putin’s own military is somewhat defiant while Zelensky’s “circling the wagons” and inspiring a nation under attack.

In fact, Dan Bongino points out that Putin isn’t doing too good.

DAN BONGINO: Everyone has an opinion on this horrific Russian invasion of Ukraine. We’re approaching the two-week mark of fighting, but despite all the press conferences, the tweets, the official statements, the debates, votes, and opinions, there are still a lot of very serious, open questions about how Vladimir Putin can keep his war machine supplied and funded. The fight can’t go on indefinitely, so what’s Putin’s plan here? Question 1 here: First, the level of engagement by the Russian Air Force has been surprisingly minimal. … Military analysts are puzzled by Putin’s failure to use all of his air assets to create his desired dystopian hellscape on the ground in Ukraine. Why is that?

Second, is Putin being strategic here and calculating with his ground forces? Also, if he’s holding his ground forces back in this convoy, why? Is he bogged down? Did they not prepare? Does he really — another question here — want to destroy major cities like Kharkiv and Kyiv? Does he want to obliterate ports while planning to occupy them later? Kind of an asinine goal, right? Can he afford to rebuild them later? The answers to these questions are still unknown, but they have to be asked, and don’t be afraid to ask questions. Don’t be intimidated.

Zelensky has repeatedly begged the United States to help create a ‘no fly zone’ over Ukraine. Especially after Putin attacked the Vinnytsia Airport, which happens to be a civilian airport. However, Biden refuses to consider the idea. In fact, senators from both sides of the aisle say such a move would effectively create WWIII. Thus, Biden’s lack of leadership has Nancy Pelosi jumping up and down claiming the president is doing a “great job.”

Ukrainian Ambassador to the U.S. Oksana Markarova weighed in, adding that none of us are truly safe.

“So if this situation, you know, happened to Ukraine, who is safe? What democracy can feel safe right now?” Markarova wondered. “So, I think, you know, the events of the past 11 days clearly shows that we have to act together and that Russia can attack anyone being totally unprovoked like they did with Ukraine. So it’s time for all of us to step up.”

Yet, American officials continue to say that the US will not jump into this conflict, for fear of WWIII.

“I think we need to be clear that we are not going to go to war with Russia, that would be the beginning of WWIII, and it would drag all of Europe into a much broader war,” Sen. Chris Murphy, D-Conn., said.

“If I were President Zelenskyy, I would be asking for a no-fly zone. The problem is, there is no such thing as a no-fly zone over Ukraine,” Murphy said. “If the United States put planes in the air, we would immediately be shooting at Russian planes. They would be shooting at us. We would be at war.”

Sen. Joni Ernst, R-Iowa, also recognized that Zelenskyy was doing the right thing for his country to ask for a no-fly zone, but making clear that “we do not want to engage directly with Russians.”

“But what we can do,” Ernst said, “is provide all the defensive mechanisms for President Zelenskyy and his armed services to provide their own protected airspace.”

Ernst said this begins “with providing air platforms to President Zelenskyy, making sure that those pilots are able to protect their own airspace.”

Fox commenters had this to say: 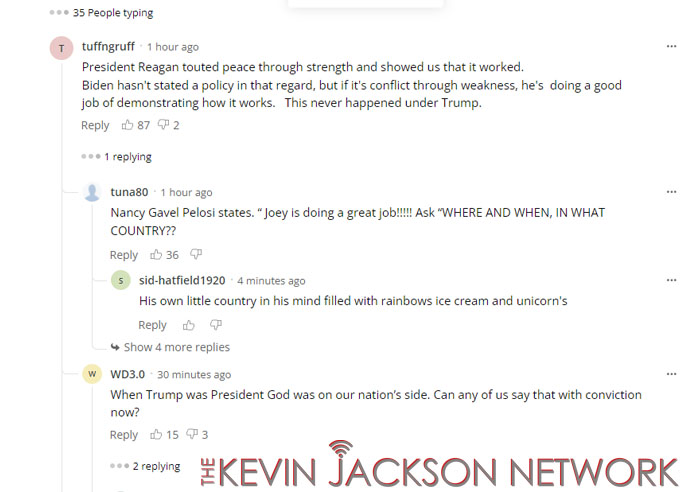 Unfortunately, we’re no longer the light on a hill. Instead, we’re a hot mess with a demented clown in the driver seat. Putin could pledge allegiance to Hitler and promise to take over all of Europe and Biden would still be scratching his head wondering what the definition of allegiance is.