Democrats must be proud of their old circus clown Joe Biden. He certainly knows how to repeat the talking points in the teleprompter.

In case you’ve been asleep for 5 decades, I remind you: Biden is a pathological liar. So whatever he says is simply a lie.

Biden performed the way Biden was expected to perform once he was cheated into office. As the world knows, Biden is a failure. In fact, dishonesty and failure are the only defining factors of Biden’s political career.

Check out this tweet from Biden about taking responsibility for his failures: 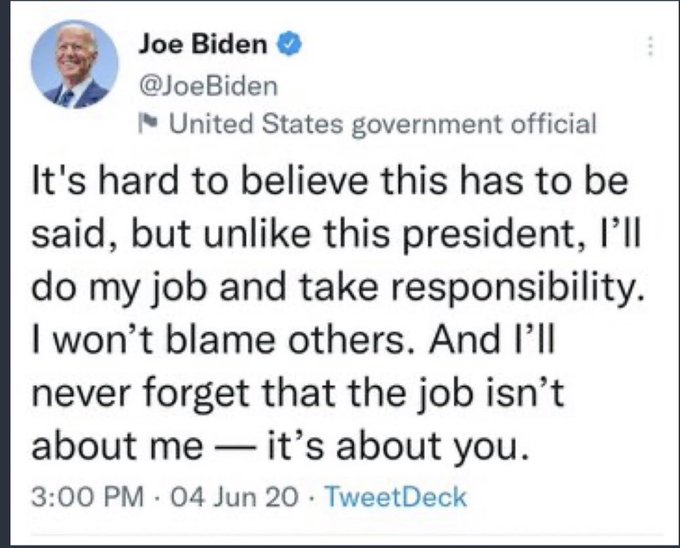 If Biden’s tweet, “it’s about you”, is the truth, I request that he please make it about somebody else?! Is that too much to ask?

Like clockwork, Biden blames somebody else for his failures on every issue. In what can only be described as the worst presidency ever, Biden has blamed:

Now Biden has a new culprit: the ultra MAGA.

Biden goes on another unhinged rant against the "Ultra MAGA" crowd… pic.twitter.com/TgWtW1HxMm

In less than 2 years, Biden ushered in a new recession, massive inflation, massive debt, out of control spending, and unrest all over the globe. And there are no signs of things improving.

Yet, Biden had this to say:

“The bottom line is this. Americans have a choice right now between two paths reflecting two very different sets of values. My plan attacks inflation and grows the economy by lowering costs for working families.”

“The other path is the Ultra MAGA plan put forward by Congressional Republicans… Raise taxes on working families, lower the income for American workers, threaten sacred programs Americans count on like Social Security.”

Is this guy for real? Anyone with an ounce of logic in their brain knows Biden is full of it. Just ask yourself how much you paid for gas in 2019. I’ll give you a hint. The national average was $2.60. Many of us didn’t see it get that high. Here in Texas, gas averaged $1.93 a gallon at the start of the year.

I recently shared my receipts for the week with my teammates here at the Kevin Jackson Network. Over $800 for one week! Granted, I have more kids that most households. But can you imagine a monthly grocery bill of $3,200?

A pound of hamburger meat has jumped from $3.80 to $6.48! It’s outrageous. If you ask me, these horrible numbers GUARANTEE Biden’s 2024 defeat. But Democrats have a plan.

I know, it sounds a bit like a tired old strategy. But this is the best the left can come up with. As long as they can get the feeble old clown to stand up and halfway read a teleprompter that puts all the blame on Trump and his massive following, well, they have a fighting chance. At least, that’s what they think.