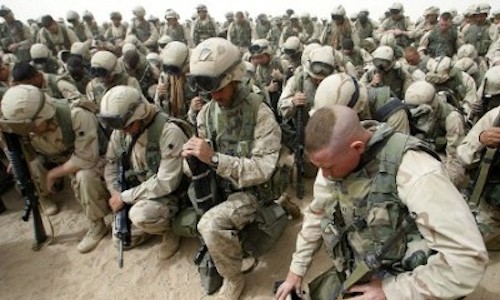 During the Second World War, the phrase “There are no atheists in foxholes” was attributed to a Catholic priest named Father William Cummings.

President Dwight D. Eisenhower adopted the phrase and used it in a 1954 speech when he said:

“I am delighted that our veterans are sponsoring a movement to increase our awareness of God in our daily lives. In battle, they learned a great truth that there are no atheists in the foxholes.”

But that was then, this is now.

Recently the saying that “There are no atheists in foxholes” was banned from the website of the Joint Base Elmendorf-Richardson in the Chaplain’s Corner after Lt. Col. Kenneth Reyes (USAF) made an insensitive blunder.  Reyes dared to have this opinion, and then had the gall to post a devotional article entitled “No Atheists in Foxholes: Chaplains Gave All in World War II.”

Right after Reyes did the unthinkable by posting his commentary, the Military Religious Freedom Foundation (MRFF) filed a complaint, demanding that the devotional be removed from the website immediately. The MRFF also asked that Reyes be disciplined for audaciously implying that atheists are atheists, making nonbelievers feel as though he attempted to “publicly denigrate those without religion.”

Curtsying to the activist group, the Air Force removed the article after receiving the complaint from 42 airmen-atheists who didn’t like being identified as people without faith.  However, removing the essay from the website wasn’t enough for the group, who then stated that “Faith-based hate is hate all the same. Lt. Col. Reyes must be appropriately reprimanded.”

In other words, for the sin of being a Christian, Reyes deserved tar and feathers, pillory stocks, or better yet, a symbolic burning at the stake.

The MRFF maintained that Reyes “defile[d] the dignity of service members by telling them that regardless of their personally held philosophical beliefs they must have faith.”

Eventually, with the help of the Alliance Defending Freedom, who filed a Freedom of Information Act request, the censored article was returned to the Chaplin’s Corner and Reyes was exonerated for the crime of expressing his opinion and his faith.

The American military, like American culture, is becoming increasingly nonspiritual.  Activists are furthering secularism and monitoring the religious behaviors of military chaplains and servicemen and women alike. Currently, Bibles are prohibited from being kept in plain sight, Jesus’ name forbidden to be uttered, and Christian military personnel barred from sharing their faith with other soldiers.

The Commander-in-Chief agrees with the persecution of Christians in the military.