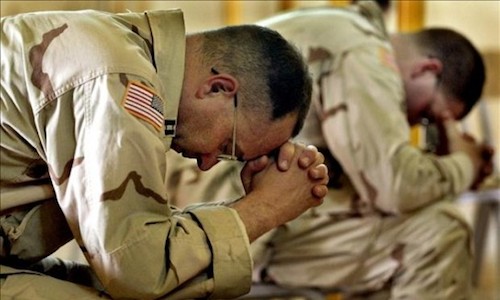 The Obama administration threatened to arrest military chaplains holding services during the government shutdown, and prohibited religious greeting cards from children to be sent to soldiers during the Christmas season. The White House has done nothing to protect the First Amendment rights of soldiers being punished for refusing to support gay marriage, even though homosexuality goes against the tenets of their faith.

In a video entitled A Clear and Present Danger released by the Family Research Council, soldiers who chose to remain anonymous expressed their concerns over the treatment of people of faith within the military.

As witnessed with the Duck Dynasty Bible-quoting dustup, one soldier on the video warns:

The larger concern in all of this is that when God is banished from the battlefield, historically and Biblically, things don’t go well for those who stand with those who reject God. Throughout the Bible (that book the military is now censoring) when the Lord of Hosts was called upon in battle, the enemies of Israel were delivered into God’s people’s hands.

Without God, there is no deliverance on or off the battlefield.

In 1 Chronicles 5:20, the account says that the enemies of Israel were defeated by God when “the Hagrites and all who were with them were given into their hand; for they cried out to God in the battle, and He was entreated for them, because they trusted in Him.”

Again, in 2 Chronicles 20:15, the Lord spoke to His prophet Jahaziel and said, “Do not fear or be dismayed because of this great multitude, for the battle is not yours but God’s.”

The worldwide persecution of Christians  is now infiltrating the seat of defense to maintain our Constitutional rights, one of which is the “free exercise of religion.”  The situation has become so twisted that those who fight to maintain that right are now unable to exercise the very thing they are fighting and dying to maintain.

If the liberal influence in the American military has its way, those in foxholes who seek to pray will now be penalized for entreating the protection of the Almighty who says that the battle is His. If discovered praying, soldiers will be punished by the very armed forces they joined in order to have the freedom to call upon the name of the Lord both in and out of battle.

Instead, Christian soldiers like Lt. Col. Kenneth Reyes are being ordered to salute those who openly advance and practice homosexuality in the military and, under threat of formal discipline, must now avoid offending nonbelievers with prayer, Scripture, or an open attitude of faithful devotion to God.

Sadly this “one nation under God” continues to careen headlong into a vortex of hedonistic secularism.

And henceforth, even if an American soldier in a foxhole isn’t an atheist, he or she damn well better act like one.